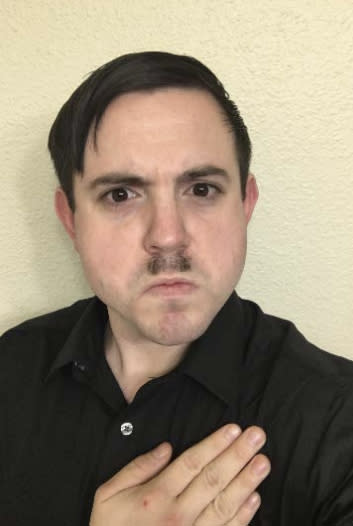 WASHINGTON — A Jan. 6 rioter who dressed as Adolf Hitler and had a security clearance was sentenced in a hearing on Thursday to four years in prison.

Timothy Hale-Cusanelli, 32, of New Jersey, who was an army reservist when he stormed the U.S. Capitol in January 2021, was convicted in May after failing to convince jurors that he did not know Congress was meeting in the Capitol, a claim he made in the stands to avoid a Congressional obstruction conviction.

“I know this sounds crazy, but I’m from New Jersey,” Hale-Cusanelli told the jurors when he said he didn’t know Congress met in the Capitol. “I feel like an idiot, it sounds idiotic, and it is.”

US District Judge Trevor McFadden, a Trump-appointed judge who oversaw Hale-Cusanelli’s trial, previously said the defendant’s testimony was “highly questionable” and indicated he was open to an increase in sentencing. On Thursday, McFadden said the claim that Hale-Cusanelli did not know Congress was meeting in the Capitol was a “ridiculous lie” and an “obvious attempt” to evade accountability.

Judge McFadden said Hale-Cusanelli “absolutely knew” Congress was meeting in the Capitol, noting that he even told his roommate that he was outside the House of Representatives on Jan. 6. McFadden also said he was “appalled” by Hale-Cusanelli’s language to a female officer on Jan. 6, in which he called her an unprintable word.

Hale-Cusanelli told the judge prior to his sentencing that he owed members of Congress and law enforcement an apology.

“I have disgraced my uniform and I have disgraced the country,” he said. “I do say ugly things” that are “repulsive” to many, he said. He assured the judge that he would “never see my face in court after this” and that the time spent in solitary confinement had changed who he was.

Federal prosecutors had demanded 6.5 years in prison. Hale-Cusanelli was convicted of all five cases he faced, including a charge of obstruction of official proceedings. However, McFadden felt that a lesser penalty should apply, because interference in the certification of the Electoral College vote did not qualify as interference in “the administration of justice.”

In a memo about the government’s sentencing, federal prosecutors referred to Hale-Cusanelli’s “enthusiasm for the Civil War and his well-documented history of violent rhetoric” and argued that a substantial prison sentence is warranted because of his background and his false statements in the gallery.

A history and government student who had previously explained the intricacies of presidential election procedure to his friends, Hale-Cusanelli falsely testified at trial that he was unaware that: (a) ‘Congress’ was in the Capitol; (b) the Electoral College certification process took place in the building; and (c) when he entered the Capitol, members of Congress were still there, fleeing and hiding from the crowd,” they wrote. “Hale-Cusanelli lied in the stands.”

Prosecutors also said Hale-Cusanelli “endorse the ideologies of white supremacists and Nazi sympathizers that fuel him with enthusiasm for a new civil war.” The jury saw only a fraction of the government’s evidence of extremist views from Hale-Cusanelli, a former security contractor who previously held a “secret” security clearance.

“Hale-Cusanelli is extremely tolerant of violence and death at best,” prosecutors said. “What Hale-Cusanelli did on January 6 was not activism, it was the preamble to his civil war.”

Hale-Cusanelli’s attorney said in a memo about the defense sentencing that the Hale-Cusanelli court will hear “that he regrets his actions, regrets the violence and destruction of property in the Capitol, and apologizes to members of Congress, congressional staff and law enforcement officers for his part in the events.”

The memo about the administration’s condemnation refers to Hale-Cusanelli’s adoptive aunt, Cynthia Hughes, who spoke at a Trump rally in Pennsylvania this month. The memo mentions her role with the Patriot Freedom Project, a group that has supported the Jan. 6 defendants, and references publicly reported information that prosecutors say “reasonably supports the conclusion that Hale-Cusanelli and Hughes committed the Jan. 6 attack.” on the Capitol. and the notoriety of Hale-Cusanelli’s case — which Hughes herself has aggravated through her public and media appearances — to enrich herself.” A footnote in the government memo mentions former President Donald Trump’s September 3 meeting.

Hughes wrote a letter in support of Hale-Cusanelli, saying he is “not a violent person; he doesn’t walk the streets of New Jersey looking like Hitler.”

Although it was noted in government courts that 34 of Hale-Cusanelli’s associates told investigators that he had “extremist or radical views about the Jewish people, minorities, and women”; that he attended a Black Lives Matter protest with a “clipboard full of statistics” in the hopes that someone would “debate” him on racial differences; and that 12 years ago he was arrested along with two others and charged with using a “potato gun” with the words “WHITE IS RIGHT”, his aunt said in a letter to the court that there is “no racist bone in his body . ”

Prosecutors said it was clear that Hale-Cusanelli does not regret his actions on Jan. 6.

Hale-Cusanelli’s selfish statements at the trial that he was wrong to enter the Capitol and that he was sorry he did should be given the same weight as his selfish claims that he did not know Congress was in the Capitol. found — that is, none,” they wrote.