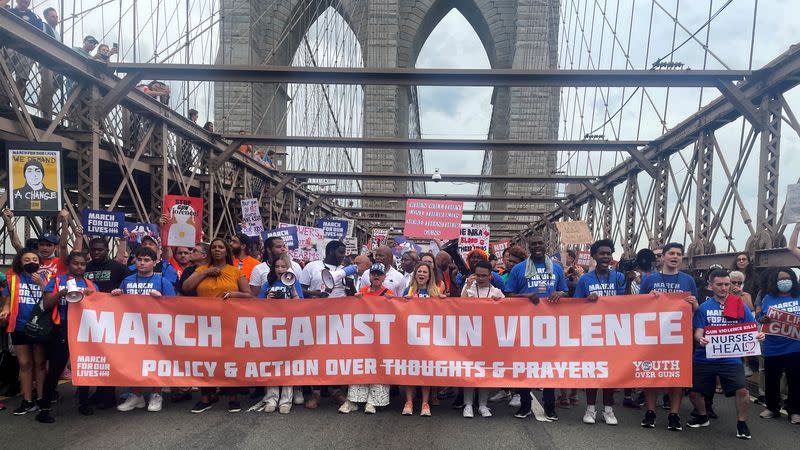 NEW YORK (Reuters) – The mayor of New York and the governor of New York sounded the alarm on Thursday after the U.S. Supreme Court struck down state restrictions on carrying handguns concealed in public, claiming that more people will now carry guns and everyone will be less safe.

Mayor Eric Adams, a Democrat and former police captain, predicted more conflict would turn into violence once it becomes easier to carry a gun in the city of more than 8 million people, the most populated in the country.

“This decision has made each of us less safe from gun violence,” Adams said at a City Hall press conference. “The decision ignores the shocking crisis of gun violence that engulfs not only New York, but our entire country every day.”

So far this year, 693 people have been shot in New York, according to official statistics that include fatal and non-fatal shootings, down about 9% from 765 in the same period last year.

Mass shootings have become a regular occurrence in the United States, including one on May 14 at a grocery store in Buffalo, New York, that left 10 black people dead. An outspoken white supremacist has been charged with murder and hate-motivated domestic terrorism.

The Supreme Court has for the first time ruled that the Second Amendment to the US Constitution, which protects the right to ‘keep and bear arms’ and was ratified in 1791, guarantees the individual’s right to bear arms in public for self-defense .

The court’s conservative majority ruled that New York State’s system of issuing concealed carry permits only to people who could prove they had a “good cause” was unconstitutional.

“Shocking,” Hochul, a Democrat, said at a news conference. “Absolutely shocking that they took away our right to have reasonable restrictions.”

Hochul said his office would work with the Democratic-controlled state legislature to pass new measures, including defining “sensitive places” where guns would be banned.

Hochul proposed changes to the state licensing process that would create a “higher threshold” for concealed carry permits and require firearms training. She said she wanted guns not to be allowed on private business premises unless the business owner explicitly decides otherwise.

His office said as of Thursday, New Yorkers still need to apply for a concealed carry license, but others will likely be granted because an applicant no longer needs to provide specific justification for wanting a firearm. to defend.

The public defenders said they represented many clients, particularly black and Latino New Yorkers, who were otherwise law-abiding but faced prosecution for obtaining a gun to defend themselves or had been unfairly denied a license.

“This decision may be a positive step toward ending the arbitrary licensing standards that have prevented legal gun ownership by black and brown people in New York City,” the Legal Aid Society said in a statement. .

(Reporting by Jonathan Allen in New York; editing by Will Dunham and Donna Bryson)