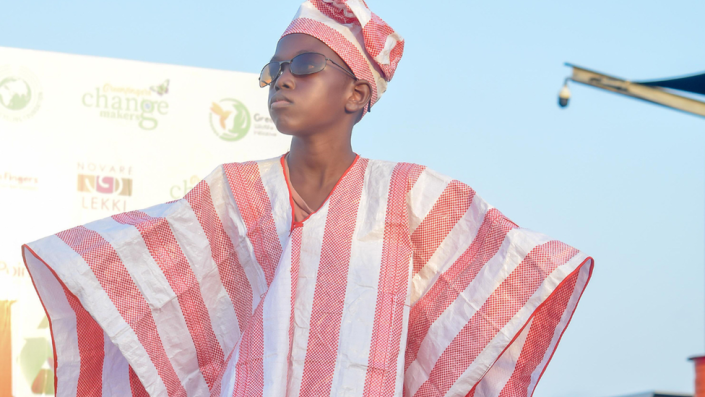 What would you usually do with your old newspapers, carrier bags and Capri-Sun juice packs?

For most people, the answer is throw them in the trash – but not one Nigerian conservation group, who teamed up with young activists and models to turn the trash into “garbage.”

The show aimed to encourage recycling and promote sustainable fashion.

According to the United Nations, fashion is currently responsible for up to 10% of global CO2 emissions.

But on Saturday, they turned their attention to the catwalk and created a show as a new way to advocate for waste reduction.

Chinedu Mogbo, founder of Greenfingers Wildlife Conservation, said there was not enough education on pollution and climate issues and events like the trashion show were the perfect vehicle to entertain and educate.

“We want young people to be a part of the advocacy for life on land and in water,” explains Mogbo, who has already set a goal to recycle as much plastic as possible “one community at a time.”

But recycling is not easy in Nigeria: waste management and waste disposal are concerns, as waste is often collected at one point and discharged at another, meaning it is not disposed of in an effective manner.

So the garbage show was a way to take its garbage collections “a step further” and reuse some of the garbage that “hadn’t been recycled before,” he said.

Chinedu believes that “Nigeria’s priority is to use oil”, and the idea of ​​”sustainability is gradually gaining ground”.

The trash — which was collected during the group’s regular garbage cleanups at drainage ditches, beaches, and in communities — eventually found its way onto the runway as part of the show.

And it seems those who participated were inspired by the looks they created.