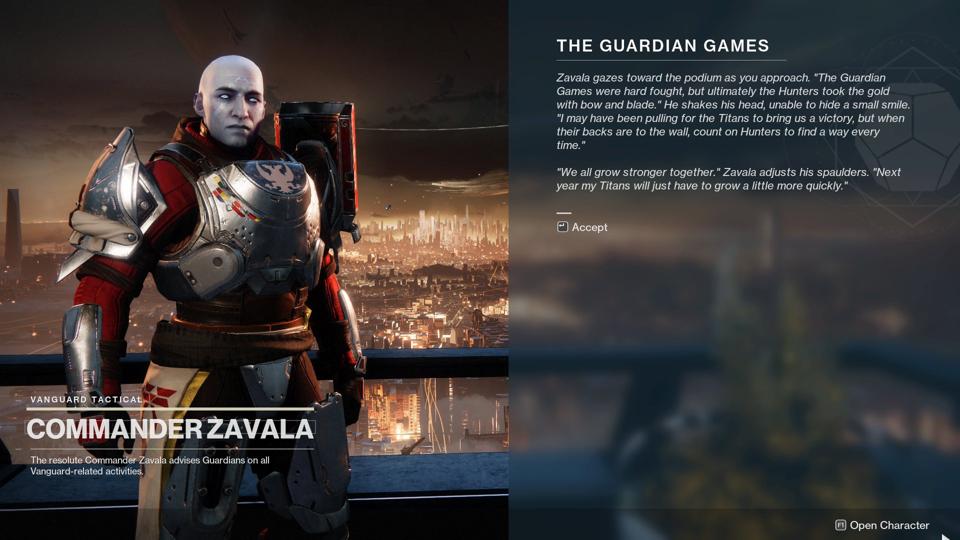 Another year, another round of controversy over the Guardian Games favorite in Destiny 2. This time it’s the Hunters who have been at the top for the entire first week so far, and the conspiracy theories have already started.

My personal favorite that I have heard? The idea that Bungie rigged Guardian Games this year for Hunters so they could announce their new Vanguard during the closing ceremonies.

This idea has been propagated due to the Hunters’ winning streak so far, and the fact that a screen has passed around which Zavala congratulates the Hunters on their victory (see above).

Of course, this does not happen. This “victory” message is just one of three messages lurking in the files, as Bungie has pre-written speeches for any class outcome. And with Bungie trying very hard to come up with a ‘fair’ system for Guardian Games leaderboards, it would be absolutely foolish for them to throw it all out the window and rig an entire live event for a class in order to land a story. . beat. No one would ever replay the event again.

Bungie literally told us that in the new system, where there is no consideration of the size of the player population, only the last place getting a 10% bonus in the future, that means the players hunters would be strong from the start until the other classes accumulate a bonus. points with lower finishes. So 5 days later, it’s no big surprise to see hunters ahead.

I think everyone has flashbacks to last year when the Titans swept the Guardian Games winning almost every day. I mean in theory that could will happen with Hunters, and then you’d kind of have to go back to the drawing board to find another more competitive system, but it’s still too early to tell.

All of that said, I think Bungie has something planned for the Closing Ceremonies. I just don’t think this relates directly to the outcome of the class winning. The Closing Ceremonies are a new addition to the Games, and I guess it has something to do with Caiatl, maybe she’s invited to the Tower. Or it’s something that will set up next season’s events, whatever they are. We know for a fact that Vault of Glass is returning next season, so it could be something related to Vex. And we know for an uh, a rumor, that next season is called Season of the Splicer, so it might have something to do with Fallen or SIVA or both instead.

It’s just too early to know if the Hunters will sweep the Guardian Games, but even if they do, it’s not because Bungie rigged it in their favor for some sort of story event. There are a lot of issues with Guardian Games, but their rigging is not on the list.

We will see how things develop over the next week and during the closing ceremonies in early May. Stay tuned and bank those motes. Uh, medals.