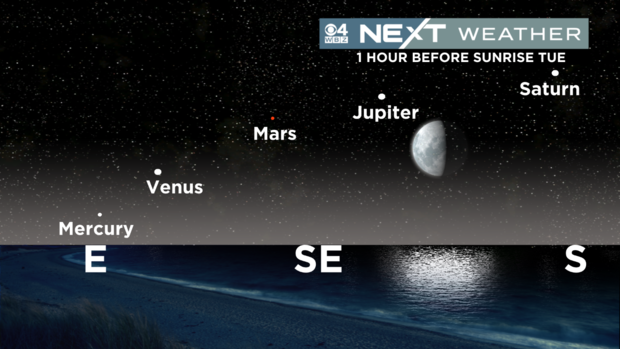 BOSTON – We’ll be feasting in the night sky over the next few weeks! It’s something straight out of a college textbook.

For the first time in 18 years (2004), we will be able to see five planets, essentially aligned, in the east-southeast sky. And even more amazing, the planets will be in order of their distance from the sun! From left to right (or even better, east to southeast)…Mercury, Venus, Mars, Jupiter and Saturn. Very cool!

Even more good news, the view won’t change much over the next few weeks. So if you miss a night or just have bad weather, no problem! The planets move relatively slowly in Earth’s night sky, so there won’t be too much change from night to night until early July.

There is a catch though… you have to get up early, REALLY early. The perfect view will occur about an hour before sunrise, which is that time of year just after 4am.

Some suggestions for getting the best view:

No need for a telescope! As long as you have a clear view, you can see everything with the naked eye.

Mercury will be the hardest to see being the smallest of the planets and the lowest on the horizon. However, since they are all aligned, I would recommend finding Venus (very bright) and looking diagonally to the left to find the smaller, dimmer Mercury.

As a bonus, the Moon will also hang around the planetary lineup this week! Early Tuesday morning, it will be just below and to the right of Jupiter, around 4 a.m. Perhaps the most camera-worthy moment will come early Friday morning. The crescent Moon will fall perfectly into alignment with the five planets that morning, between Venus and Mars.

Weather-wise, Tuesday morning may be the best viewing of the week. There is still hope that Thursday’s clouds and rain may dissipate in time for Friday morning, stay tuned for updates on that.

The planets will no longer appear in this order until 2040! So don’t miss it!

We would love to see your photos of the planets! Send them to @TerryWBZ on Twitter or to [email protected]