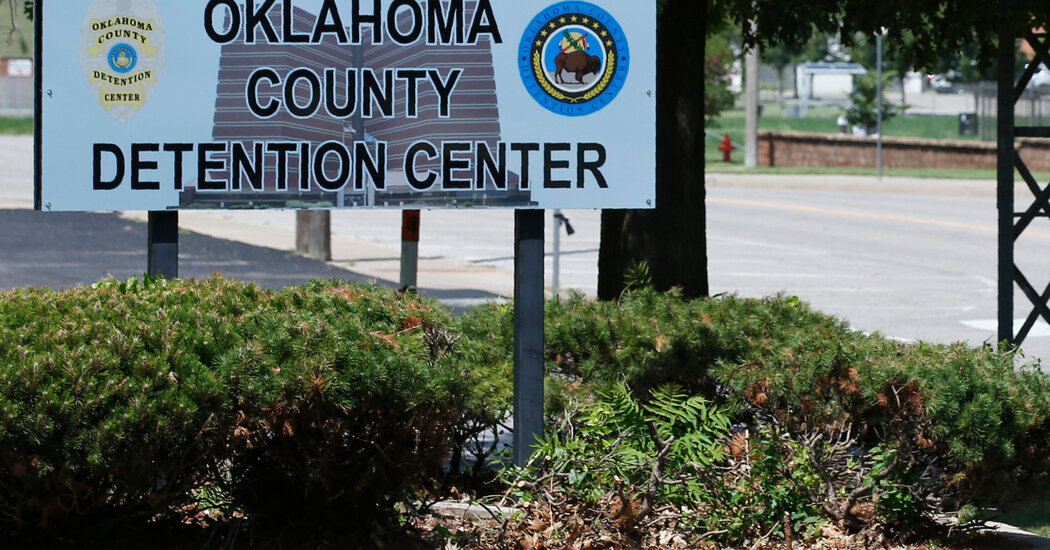 A February inspection by the Oklahoma State Department of Health found showers at the prison, the Oklahoma County Detention Center, were covered in “black residue that appeared to be mold. “. Some showers were clogged and had standing water, which had a “strong, pungent odor,” the report said, and “hot water” in a shower was 56 degrees.

The detainees told investigators that the establishments “had been in this state for several months”. They also said that it was “not unusual” to have access to a shower only once every eight days.

The vents at the prison, which is in Oklahoma City, also had “a buildup of lint and black residue.” Living quarters were dirty and overcrowded, with three inmates living in a space that could safely hold one, the report said, and a leaky roof often led to “several inches of water” filling the laundry room floors. , kitchen and basement.

Saturday’s hostage clash occurred just after 4 p.m. local time as drugs were being administered to inmates. A police officer was overpowered and taken hostage by at least one inmate, Greg Williams, the administrator of the detention center, said at a press conference on Saturday evening.

The inmate then took the officer’s radio and keys and released other inmates from their cells, Williams said. No other staff were injured and Mr Williams said he did not know how many inmates were released from their cells or were involved in the standoff. Sheriff Tommie Johnson III said authorities tried to defuse the situation, but the inmate held an unspecified object around the officer’s neck, prompting Oklahoma City police to fatally shoot the inmate .

The inmate who was killed, Curtis Williams, 34, was charged with rape.

At a press conference on Wednesday, Greg Williams, the prison administrator, said he told Curtis Williams’ family that “we regretted how it ended”.

He said that the struggles at the detention center were largely due to “insufficient staff and infrastructure” and that episodes like the deadly hostage standoff “certainly make recruitment more difficult, as one might expect. imagine”.

READ  Protestant students in Wits burn miners' monument, try to bring it down

The Oklahoma State Department of Health report found “an interruption in inmate surveillance.” Inmates “rarely see staff presence in units, and when they do, it’s brief,” the report said.

A person recording inside the center during the standoff could be heard complaining about its conditions. “The water is not working,” said the unidentified person. “The toilets are backed up. This is what we are dealing with. “

Tricia Everest, president of the Oklahoma County Criminal Justice Authority, which oversees the jail, told Wednesday’s press conference that officials will work to “change the culture and actually work to increase staff. “.

The quality of life of the detainees, she said, was “paramount”.

Citing a review of files, the report found that in January, the prison failed to notify the state health department of 40 “serious injuries to inmates requiring transfer to an outside medical facility.”

Inmates also complained of bed bugs and said their bedding was changed every six to seven weeks – less frequently than the required weekly changes. Food was often cold, served late or missing due to staff shortages, according to the report.

Another example of unsanitary conditions in the report was an inmate who had been handcuffed to a bar in a hallway for hours while waiting to be returned to his quarters after receiving medical treatment. Cries from inmates for help went unanswered, and the report cited several cases of inmates who had not received their prescribed medication.

Barry Edwards, the detention program manager for the state health department, wrote in a March 8 letter to Mr. Williams, the prison administrator, that “if the deficiencies listed in the report” were not corrected within 60 days of receipt, the health commissioner will file a complaint with the attorney general or district attorney.

READ  Feel like you're always cleaning up during the pandemic, but your home is always a mess? You are not alone | UKTN News
Share
Facebook
Twitter
Pinterest
WhatsApp
Email
Telegram
Previous articleGovernment keeps domestic price of natural gas unchanged at $ 1.79 / mmBtu
Next articleThe hard summer arrives from July 31 to August 1 with the return of the festivals