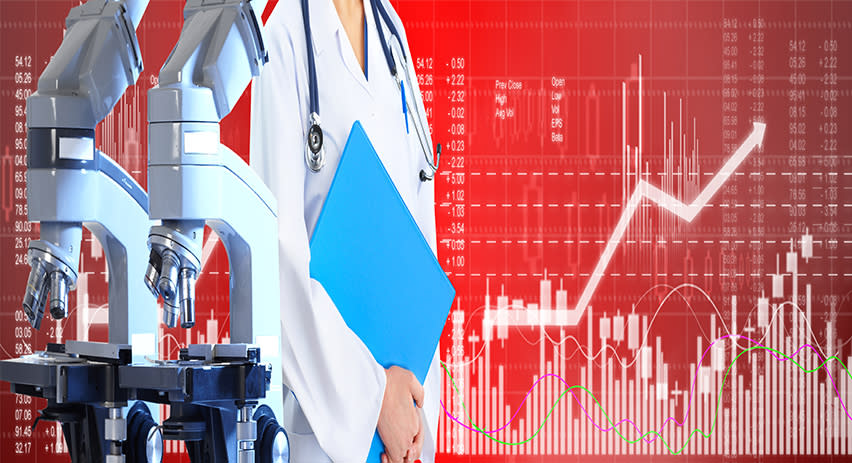 The biotech sector, like most market segments, took a major hit in the first half of the year. Recently, however, the segment’s performance has improved, which has helped the NASDAQ Biotechnology Index (NBI) stay ahead of the NASDAQ (13% increase in the last 3 months versus the NASDAQ’s 3%).

Oppenheimer’s biotech team believes there is a simple explanation: “We believe that much of the recent outperformance has been driven by SMID caps, many of which have risen admirably in recent months… We are seeing some successful results of key clinical trials in this group [Alnylam Pharma, Caribou Biosciences, Cincor Pharma, amongst others]In addition, a growing number of high-profile M&A announcements could rekindle the interest of specialists and generalists.

Because of this, Oppenheimer argues that the sky looks a “little brighter” in 2H for the biotech industry. In fact, Oppenheimer analysts expect two names to follow in their peers’ footsteps, soon releasing successful trial results that could help them move forward.

We ran both tickers through the TipRanks platform to see what the rest of the street had in mind for them. It seems Oppenheimer’s analysts aren’t the only ones showing confidence; both are rated by the analyst consensus as Strong Buys with a lot of upside potential. So let’s see the details.

Oppenheimer’s first pick that we’ll look at is Madrigal Pharmaceuticals, a clinical-stage biopharma focused on finding new treatments for fatty liver. More specifically, the company is committed to discovering a viable treatment for NASH (Non-Alcoholic SteatoHepatitis) disease. This is a more advanced form of non-alcoholic fatty liver disease (NAFLD).

It is thought that about 20% of adults worldwide are affected by NAFLD and 30% of US adults; 20% of that population has NASH. Since there are currently no FDA-approved NASH-specific drugs available, there will most likely be a generous reward for whoever brings a viable solution to market first.

Madrigal’s lead product candidate is resmetirom (MGL-3196), a liver-targeted selective thyroid hormone receptor agonist, currently in Phase 3 clinical trials and indicated for the treatment of NASH. As such, the drug could potentially become the first drug to gain approval for this disease.

In June, the company presented data at the European Association for the Study of the Liver’s International Liver Congress (EASL 2022), where Madrigal announced in-depth results from the Phase 3 MAESTRO-NAFLD-1 study double-blind/placebo-controlled.

Oppenheimer analyst Jay Olson notes that the results were decidedly positive, highlighting the fact that resmetirom “induced beneficial changes in Fibroscan and MRE, where the greatest improvements were seen in the most advanced patients.” In fact, the analyst thinks the results lay the groundwork for an upcoming data readout.

“We believe that Ph3 MAESTRO-NAFLD-1 results provide de-risking support for the Ph3 MAESTRO-NASH biopsy study in NASH patients (N 2,000), which is ongoing with interim results expected in 4Q22 that could potentially support Subpart-H application for accelerated approval,” explains the analyst. “Previous Ph2 data showed that reduced liver fat on MRI-PDFF translates into NASH resolution and amelioration of fibrosis.”

What does it all mean for investors? While Olson thinks negative results could lower the stock by ~80%, positive results from the survey could more than double the stock.

Olson is apparently convinced that Madrigal will bring the goods. The analyst’s outperform rating (ie Buy) is supported by a price target of $170; this figure allows for a 12-month profit of a staggering 162%. (To view Olson’s track record, click here)

It’s not that other Street analysts aren’t shy about predicting big things for this name either. With 9 Buys and 1 Hold received in the last three months, the consensus is that MDGL is a Strong Buy. Although it is less than Olson’s forecast, the average price target of $149.44 still indicates significant upside potential of 130%. (See MDGL inventory forecast at TipRanks)

Now let’s look at Milestone Pharmaceuticals, another biotech but with a very different mission. The company plans to find a treatment for arrhythmias and other heart conditions.

The drug is currently in a Phase 2 proof-of-concept trial where it is being evaluated for the acute treatment of fast ventricular rate (RVR) AFib. But what’s more important right now is the more advanced program for which there is an emerging catalyst.

Etripamil is being tested in the Phase 3 RAPID trial for the treatment of paroxysmal supraventricular tachycardia (PSVT) – a condition in which the unusual, electrical “wiring” of the heart results in an unpredictable and recurrent rapid heart rate. The condition affects the lives of approximately 1.6 million people in the US, and finding a solution will not only be an important development, but will also be a way to reduce healthcare burdens and costs.

Milestone expects to report topline data from the study midway through 2H22, and heading into the readout, Oppenheimer’s Leland Gershell likes the “risk-reward” here.

“Primary endpoint success (time to delivery termination during the first 30 minutes) should meet registration requirements and allow for an NDA application in 2023,” the analyst noted. “We believe etripamil represents an important therapeutic advance, as well as a means to reduce healthcare burden and costs, and is poised to generate maximum net sales of $500 million in PSVT alone. A Phase 2 trial in fast ventricular rate atrial fibrillation has begun and could pave the way for a significant opportunity for label expansion.”

So it’s no surprise that Gershell rates Milestone as Outperform (ie Buy), along with a price target of $16. The consequences for investors? Potential rate of increase of ~84% from current levels. (To view Gershell’s track record, click here)

Obviously Wall Street likes this name; MIST recently collected 3 other analyst reviews and they are all positive, giving the stock a consensus rating from Strong Buy. If we assume the average target of $14.50, these stocks will be 66% more valuable one year from now than they are today. (See MIST stock forecast on TipRanks)

To find great ideas for trading biotech stocks at attractive valuations, visit TipRanks’ Best Stocks to Buy, a newly launched tool that brings together all of TipRanks’ stock insights.

Disclaimer: The opinions expressed in this article are those of the featured analyst only. The content is for informational purposes only. It is very important to do your own analysis before making any investment.

What Micron’s Billions For Semiconductors Mean For Inflation, Jobs, The Stock Market And More