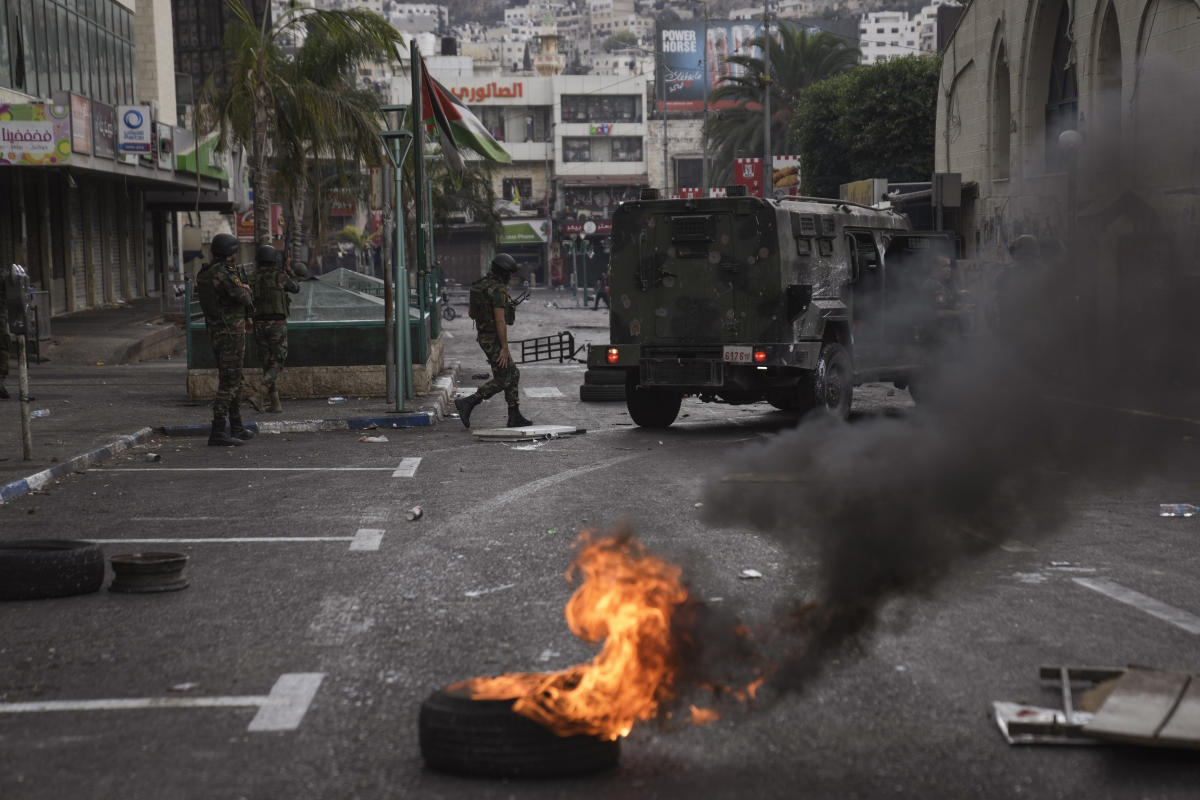 NABLUS, West Bank (UKTN) — Nablus was a battered city. Shops stared open at the street, their windows smashed. Street signs were destroyed. Ash stained the roads. Armored vehicles roamed the city center, still pockmarked and spattered with paint from a day of protests.

The destruction resembled the aftermath of gunfights between Palestinian youths and the Israeli army in the second-largest city in the occupied West Bank, where posters of killed Palestinians plastered the limestone walls of the old city. But this time Israel was not involved. The violent chaos on Tuesday that killed a 53-year-old man broke out between Palestinians and their own security forces, who are working with Israel in an uneasy alliance against Islamist militants.

The rare eruption, which took place amid the deadliest violence in the West Bank since 2016, underscored the internal divisions tearing Palestinian society apart and spotlighted the growing ranks of disillusioned, impoverished young men taking up arms.

Many have spent their lives in Israeli-occupied territory, scarred by infighting and segmented by checkpoints. They have not had national elections since 2006. They have no hope for the long stalled peace process. Their aging president, Mahmoud Abbas, is in his 18th year of what should have been a four-year term. They see his Palestinian Authority as a vehicle for corruption and cooperation with Israel.

Clashes erupted after Palestinian forces arrested two men, including Musab Ishtayyeh, a popular local militant wanted by Israel. A 26-year-old man living in the area said that although the parties reached a truce, further violence was likely unless Ishtayyeh is released.

“I don’t recognize Abu Mazen’s presidency,” he said, expressing popular sentiment in the neighbourhood. He spoke on condition of anonymity because he feared arrest.

“There is no difference between Israel and the Palestinian Authority,” he added, saying the Palestinian security forces “want to burn the resistance and kill those who fight.”

The latest violence stems from a series of deadly Palestinian attacks in Israel last spring that sparked a spate of nighttime Israeli arrest raids across the area. About 90 Palestinians have been killed in the crackdown. Israel says many were militants or local youths who threw rocks and firebombs at troops, although several civilians were also killed.

Experts say the escalation has deeper roots in a power struggle as Palestinian leaders vie over the succession of 87-year-old Abbas.

“The leadership vacuum is seeping all the way down from top to bottom. High-level members are trying to rally their supporters for doomsday,” said Tahani Mustafa, an analyst at the International Crisis Group. “Radicalism really thrives in these kinds of contexts.”

A lack of opportunities and political horizons have also fueled unrest. Israel captured the West Bank in 1967 and its military occupation shows no signs of ending.

The latest round of substantive peace talks broke down in 2009, and Israel has steadily consolidated its control of the area through the ever-expanding settlement construction that is now home to some 500,000 Jews. The Palestinians are seeking the entire West Bank, along with Israeli-annexed East Jerusalem and the Hamas-controlled Gaza Strip, for a future state.

Largely disenchanted with the PA, young Palestinians flock to a range of militant groups to obtain weapons. Palestinian security struggles to maintain control in hotbeds of fire in the northern West Bank, such as Nablus and Jenin.

The instability affects Israel, which relies on cooperation with Palestinian security, and the United States and other countries that have relied on the PA to bring order to the West Bank and serve as a partner in stalled peace negotiations.

“We need the PA as a buffer between us and all (Palestinian) organizations,” said Michael Milstein, a former head of the Palestinian branch of Israel’s military intelligence. “The test has only just begun.”

Palestinian security officials declined to comment on this week’s violence or the reasons for their unpopularity.

In recent months, the Israeli military has become frustrated with what it describes as the PA’s reluctance to maintain order in the hotbeds under its control.

“The PA has the manpower, the ammunition and the weapons,” an Israeli military official told The UK Time News on condition of anonymity in accordance with military guidelines. “In certain places, we feel like they don’t have the will.”

The official said the military has seized 300 weapons since Israel began its raids on the West Bank. He said the weapons come mainly from small factories that make makeshift pistols, or are smuggled in from Jordan, Egypt or Lebanon. Some weapons stolen from the military also find their way to the West Bank.

Wednesday’s truce temporarily halted fighting, but the streets still buzzed with tension and an armed group vowed to continue fighting on behalf of their arrested comrades.

“We will not abandon our brother … who is wanted by the occupation forces and is currently being kidnapped,” the militant group called the Den of Lions wrote to the UKTN.

The group, based in the stone warren of the old city, is linked to Ibrahim al-Nabulsi, a prominent militant killed in an Israeli raid last month. His photo is on coffee stands, graffiti, posters and necklaces worn by children in Nablus. Palestinian security services identified him as the son of one of their own colonels – a schism that illustrates how younger Palestinians, growing up during the scorching violence of the second Palestinian intifada, have lost faith in their leaders.

Many Palestinians see their security forces as protecting Israel from Palestinian protests, not as Palestinians from Israeli attacks. The armed forces have also been criticized for brutal tactics, such as last year when riots broke out after the death of an anti-corruption activist in custody.

Gangs of young Palestinian men increasingly shoot Israeli troops during raids or shoot at soldiers manning checkpoints. The gangs operate without the support of traditional political factions and militant groups.

Last week, two Palestinian gunmen killed an Israeli soldier at a military checkpoint in the northern West Bank before being shot dead. One of the attackers was a Palestinian security official.

Ghassan Khatib, a former Palestinian peace negotiator and cabinet minister, acknowledged that there is little public trust in the Palestinian leadership. He blamed a lack of hope and repeated Israeli measures that have weakened the Palestinian Authority.

“If everyone maintained the same attitudes and practices,” he warned, “we are gradually moving toward the collapse of the Palestinian Authority and chaos in Palestinian society.”