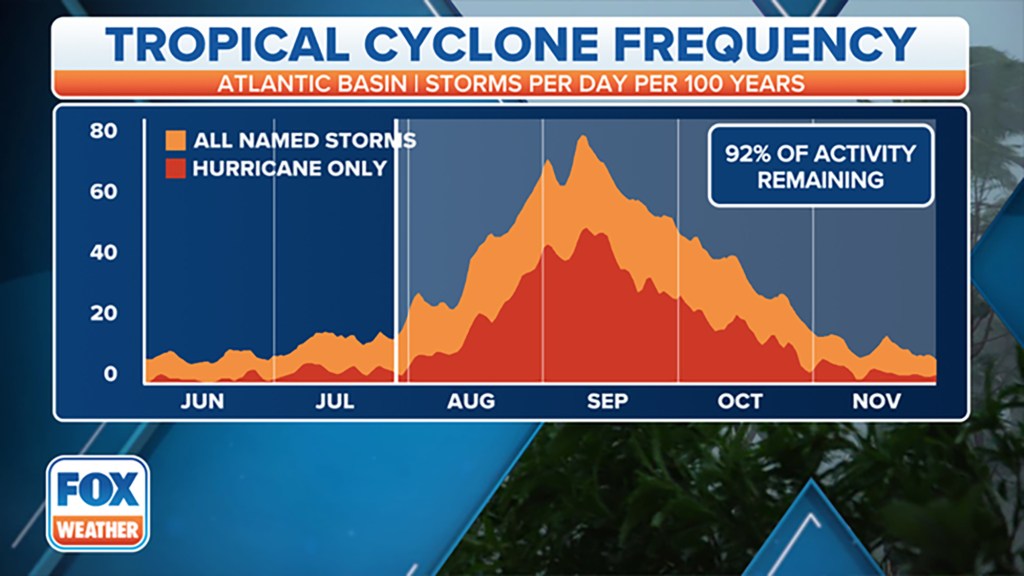 Tropical Storm Colin, which briefly hit the Carolina coast on July 2 and 3 with heavy rain and gusty winds, was the last system to pass through the Atlantic basin.

However, it is not uncommon for activity in the tropics to come to a halt in June or July before the season picks up in August.

But as you can see in the chart below, there is about 90% of an average Atlantic hurricane season left by August.

The period from August to early October tends to produce the most hurricanes and tropical storms in an average year. September is the most active month of the Atlantic hurricane season, with September 10 being the official seasonal peak.

Consequently, this same period is typical when the strongest, most impactful hurricanes roam the Atlantic basin.

See also  How Abusive Rabbis Prey Their Own Congregational Members: 'Nobody Is Safe'

In the past five years alone — from 2017 to 2021 — the US has been hit by four hurricanes in August, five in September and four in October. That included last year’s Hurricane Ida, which devastated parts of southeastern Louisiana after making landfall on August 29 as a Category 4 hurricane.

The storm created a powerful 14-foot storm surge along the Louisiana coastline, pouring torrential rainfall across much of the northern Gulf Coast, but the impact didn’t stop there. The storm’s effects were also felt across the East Coast, where tornadoes and flooding were reported as far north as New England.

Hurricane Ida was blamed for the deaths of more than 100 people, and estimated damage was $75 billion from the Caribbean to New England. The devastation was enough to propel the storm into the fifth costliest hurricane in US history, just behind Katrina, Harvey, Maria and Sandy, respectively.

The World Meteorological Organization voted in April 2022 to remove the name “Ida” from future use in the Atlantic basin.

Why does the Atlantic Ocean become more active in August?

Compared to June and July, the tropics become much more active from August as almost the entire Atlantic basin becomes available for tropical development.

The so-called key developing region between Africa and the Lesser Antilles, which is typically not conducive to early-season storms due to a frequent influx of Saharan dust and dry air into the region, is becoming more favorable for development as the dusty, dry air becomes less persistent .

Tropical waves also crop up more often off West Africa in August, and when conditions are right, they often seed tropical development in the main developing region during the peak of the hurricane season.

The Gulf of Mexico is another hot spot for tropical storms and hurricanes that form during the peak of the season, as water temperatures in the Gulf reach their highest levels of the year, giving tropical cyclones more energy to grow and intensify.

Outlook for the 2022 Atlantic Hurricane Season

Including the three storms that have already formed this season, forecasters from NOAA’s Climate Prediction Center are forecasting 14 to 21 named storms, six to 10 hurricanes and three to six major hurricanes (Category 3 or higher on the Saffir-Simpson Hurricane Wind Scale).

The latest forecast from Colorado State University predicts that 17 additional named storms will form this season, for a total of 20. That number includes 10 hurricanes, five of which are expected to be Category 3 or stronger.

These numbers are greater than the 30-year (1991-2020) averages of 14 named storms, seven hurricanes, and three major hurricanes.

If the outlook confirms, this will be the seventh consecutive above-average hurricane season in the Atlantic.

Since Alex, Bonnie, and Colin have already formed, the next system to become at least a tropical storm will be named “Danielle.”