Nyeri Governor Mutahi Kahiga has revealed that certain individuals close to President William Ruto are pushing for a feud with his deputy Rigathi Gachagua.

Kahiga, who is also the governor of Gachagua, made the claims just days after declaring that the East African Legislative Assembly (EALA) outcome was a warning to Kenya Kwanza.

“If you hear noise, it’s because there could be one or two people around the president trying to paint a false picture of his deputy,” Kahiga said.

The governor warned that the electorate region had a choice to reconsider its position in Kenya’s ruling Kwanza coalition if it was taken for granted.

Nyeri Governor Mutahi Kahiga during a church service in Nyeri on August 14, 2022

Kahiga asked the ruling coalition to respect the decision of Central Kenya lawmakers to side with Azimio’s Kanini Kega to join the regional assembly.

The provincial boss denounced the Kenya Kwanza outfit for failing to nominate a leader from Mt Kenya to the EALA, forcing Gachagua to step in and reaffirming the coalition’s unity.

Gachagua rejected claims that there was a rift in the alliance, citing that the region was firmly behind President Ruto.

Kahiga rallied Nyeri and the entire region behind Gachagua so that he could work with President Ruto on his economic transformative agenda.

“Right now Rigathi is in charge of the country because his boss is in Korea to serve Kenya. Let’s not take it for granted

See also  'I want to take it as a challenge': 6 Singaporean prodigies aim for music, math and sports

To support the president, we have to make his deputy strong, because you all know that when a fire breaks out, it usually hits number two in the office. So keep praying for him,” the district chief repeated.

However, the second-in-command blamed the media for creating a rift where there wasn’t one, opining that what happened in the August house had nothing to do with the president or himself.

Kega on Wednesday, November 23 declared Gachagua as the pivot in Mount Kenya who was wise in uniting the region.

“Rigathi did a good job uniting us, this is the only senior leader we have in Mt Kenya. We need to rally behind him as a region,” Kega said.

While attending a church service in Nyeri on Sunday, November 20, he gathered the region behind Ruto.

“I would like to request the UKTN to continue to support His Excellency President William Ruto as the government works around the clock to ensure it fulfills its promises to the people as we continue to spread the gospel of peacekeeping in the Mount Kenya region he stated. 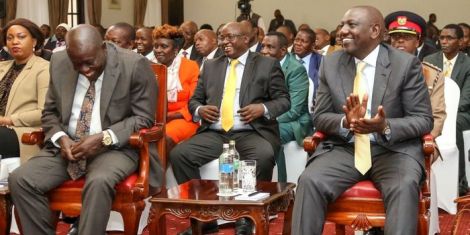