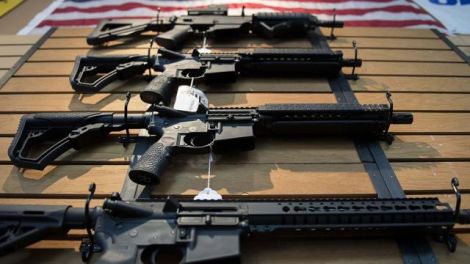 A businessman in Uasin Gishu counts his blessings after police beat back robbers caught in a late-night robbery.

The officers responded to a tip from a neighbor who heard a commotion in the neighboring gas bottle shop at around 02:00 on the night of Sunday, November 20

When he checked, he saw silhouetted figures of individuals going in and out of the store, prompting him to call the police.

When the agents arrived at Sabugo stores, they ordered the six thugs to go outside, but they resisted, resulting in a fight at the door.

Several weapons lay on a table.

After a few minutes of pushing and pulling, the door opened and the thugs attempted to attack the police officers, prompting one of them to open fire.

“Upon arrival, the officers who wasted no time ordered the robbers who locked themselves in the store to leave. But the robbers defied orders which led the officers to push open the door in an attempt to open it. The determined robbers pushed the door from inside in retaliation, leading to a pushing and pulling contest that lasted several minutes before the thugs finally ran out of steam and the officers burst in.

“In the ensuing fight, two of the suspects attacked the officers with machetes, prompting one of the officers to open fire on the thugs and immobilizing one of them,” the Directorate of Criminal Investigations said in a statement.

Five of the robbers escaped when officers took their injured accomplice to hospital.

During the incident, the robbers failed to take anything away as their robbery mission was nipped in the bud by the officers.

The attack came on the back of an increased police operation across the country following a recent spike in criminal activity, with Nairobi being the hardest hit region.