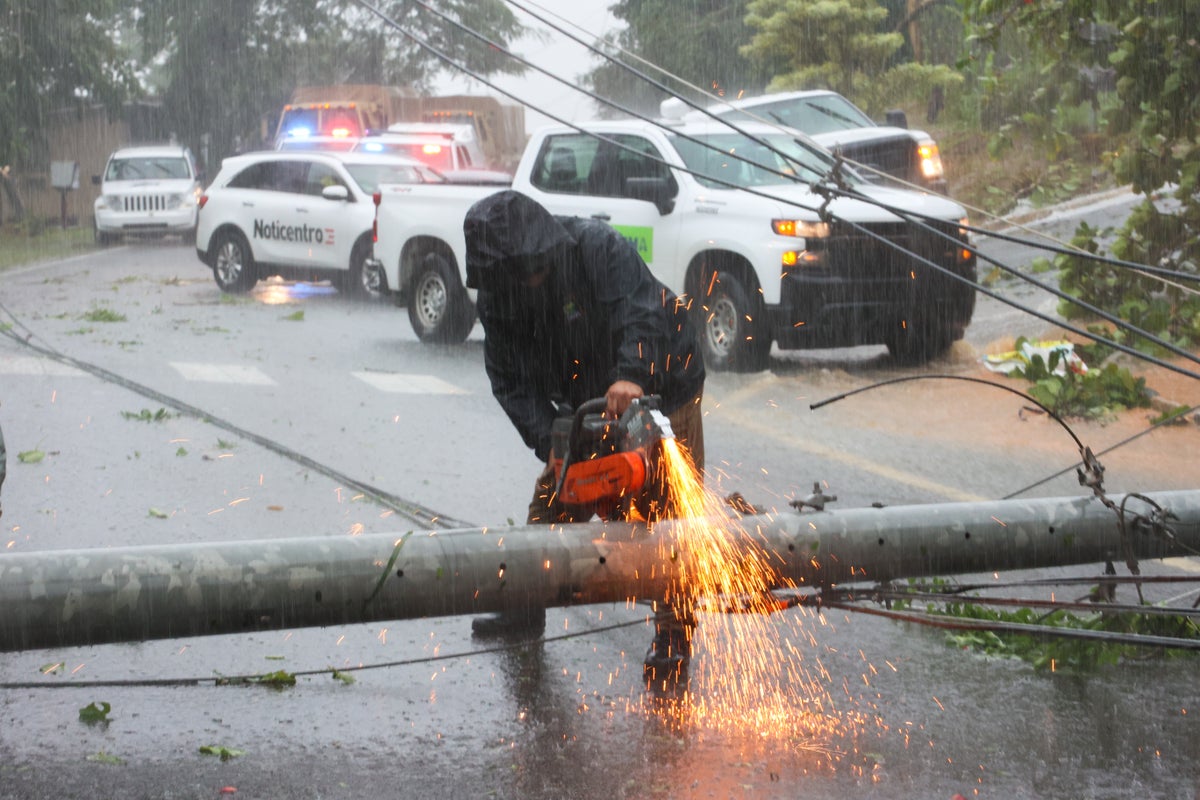 More than a million Puerto Rico residents were without power as Hurricane Fiona left the US island territory and headed for the Dominican Republic.

Wind speeds of 85 mph and “historic” rain were felt as the tropical storm made landfall Sunday on Puerto Rico’s east coast, where many rivers are now heavily flooded and at least one road bridge has been wiped out.

As of Monday morning, more than 1.3 million homes were still without power as conditions remained too dangerous for repairs across much of the island. Energy company LUMA warned that it could take several days before the power supply is fully restored.

The storm made landfall in the Dominican Republic early Monday and is on track to sweep across the southeastern Bahamas and Turks and Caicos Islands on Tuesday.

US President Joe Biden issued an overnight disaster declaration to accelerate the relief process for the island, which was days away from marking the fifth anniversary of another powerful hurricane that killed thousands and caused the collapse of vital energy. infrastructure caused in 2017.

Energy company LUMA says some areas are being “re-energized” after the entire island of Puerto Rico lost power during the storm.

According to a tweet from LUMA, 100,000 people have been supplied with power as of this morning – but much more needs to be done after 1.3 million customers lost power in total.

Caribbean damage is being assessed

Hurricane Fiona has devastated some of the smaller islands in the eastern Caribbean and Puerto Rico. French Prime Minister Emmanuel Macron tweeted that he has recognized a “state of natural disaster” in the island of Guadeloupe, a French overseas region.

Bahamas, Bermuda likely to hit next

Hurricane Fiona is expected to turn north as it crosses the Dominican Republic and returns over the Atlantic Ocean.

From there, the storm is expected to pass close to the southeastern end of the Bahamas before moving parallel to the US east coast as far as Bermuda.

Fiona could hit Bermuda on Thursday, at which point it is predicted to be close to a Category 4 storm.

Fears are mounting that millions of Puerto Ricans could be without power for days after Hurricane Fiona.

As of Monday morning, more than 1.3 million homes were still without power, according to PowerOutage.US — down from about 3.3 million right after the storm swept across the island.

Conditions remain far too dangerous for crews to begin restoring power across large areas of the island, which was hit by up to 30 inches of rain in some areas within hours.

Energy company LUMA warned on Sunday that it could take several days for power to be fully restored amid “incredibly challenging” conditions for repairmen.

Hurricane Fiona made landfall early Monday morning on the eastern shore of the Dominican Republic after slashing Puerto Rico with up to 12 inches of rain.

The island nation is bracing for high winds and heavy rainfall throughout Monday before sweeping past the southeastern Bahamas as well as Turks and Caicos into Tuesday.

As it continues its path, Fiona could pose a significant threat to Bermuda, potentially penetrating parts of Atlantic Canada later this week. It is not expected to follow near the US East Coast.

A metal bridge in Puerto Rico that was built in the wake of devastating Hurricane Maria in 2017 has been torn away again by Hurricane Fiona.

Videos shared by reporters, bystanders and local politicians show the bridge on Puerto Rico Highway 123 in the city of Utuado being ripped from its moorings and washed downstream by running water.

Some videos showed metal railings on the side of the road, attached to the bridge, pulled out of the ground and dragged along.

Hospitals run on generators, some failed

Hospitals and health centers in Puerto Rico ran on generators Sunday and Monday mornings as authorities and the public continued to process the aftermath of Hurricane Fiona.

According to reports from the area, some of those power generators had failed as electricity was slowly restored to the island of about 3 million people.

Secretary of Health Carlos Mellado said crews rushed to repair generators at the Comprehensive Cancer Center, where several patients had to be evacuated to another facility, according to the UK Time News.

Democrat calls for action on infrastructure and climate change

Karen Green, the Democratic nominee for Florida’s US House District, called for enhanced disaster response capabilities in her home state and the United States in the wake of Hurricane Fiona.

She said Americans increasingly need infrastructure that can withstand extreme weather events, adding that it was also “because of disasters like Hurricane Fiona that we need to fight climate change.”

While the weekend hurricane can’t just be associated with a warming climate, such events are more likely.

A disaster declaration for Puerto Rico was approved Sunday by US President Joe Biden, the White House said.

The move will make more federal resources available to the island territory as it recovers from the weekend’s extreme weather.

One dead in crash in Taup