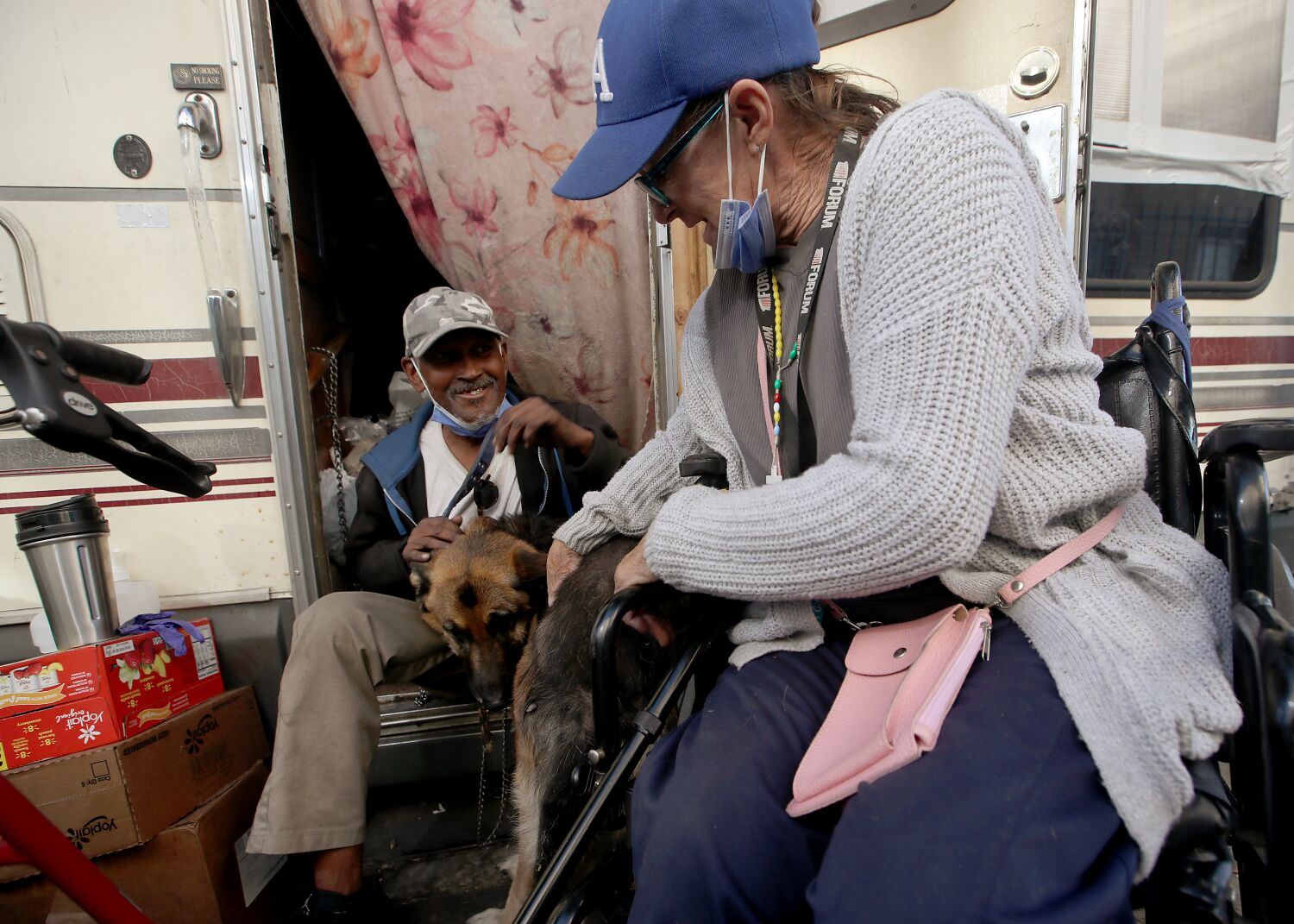 Patricia Ragland has been anticipating Thanksgiving with her family all week. For the past two years, she’s spent the day alone, and like many Americans enjoying the holiday with a large gathering for the first time during the pandemic, she’s nervous and excited.

When she walks into her sister’s home in Moreno Valley, she expects many questions, a little tension perhaps, the typical undercurrents of judgment and concern. But for homeless people like Ragland, expressions of love are sometimes hard to decipher.

“Where were you?” she imagines they’ll ask, and she’ll share the good news. Since July she has been housed and now resides in a motel on Western Avenue.

“We hope you don’t disappear again,” they’ll probably answer, trying to put her at ease. But that will hurt the most. She can’t help but feel like the aunt who once had everything and now has so little.

“I never thought it would be me,” she said. “This is one of my biggest fears.”

Thanksgiving, the start of the year-end festivities, is a day of reflection, but for the unprotected, expressions of gratitude aren’t always easy. In Los Angeles, the homelessness crisis has become more acute. Politicians make promises, agencies try to raise hope, but for those whose lives are defined by the street, the past weighs on the future.

When Ragland lost her job at a nursing home in 2017, she couldn’t afford her apartment rent and ended up on the streets of South Los Angeles.

In January, she lost her 24-year-old son, JaiShahn, to diabetes, and a niece two years earlier in a stabbing at a Mid-City nightclub. The two youths used to light up the room and now they were gone.

Ragland, 45, fights back tears and tries to take the focus off her grief.

“It will still be a happy event,” she said, grateful for the family who invited her and for dinner with the dressing her sister makes from their mother’s recipe, her favorite.

As she sits at the table, taking in the faces, the voices and the cheers, Ragland knows she will whisper a short prayer to herself.

“Don’t let the things we’ve been through separate us further,” she will say. “All we have is us. So just love each other very much and don’t let each other go.”

While familiar faces and mutual memories connect many families on this day, Pablo Arroyos turns his mind to Mexico, where his wife and two young daughters now live. Their last Thanksgiving together was in 2019.

Life in America—a one-bedroom apartment in Temple City they shared with a cousin—had become too difficult and expensive for them, and now Arroyos is alone, living in his 1995 Chevy Blazer and sleeping on a thin mattress with a few pillows, surrounded by boxes filled with T-shirts and sneakers, canned peaches and baked beans, crates of water, toothpaste, and toiletries.

The 43-year-old gardener has some friends who are also homeless and live under a highway overpass near the hotel where he parks his SUV in Arcadia. He tries to find work and believes that everything here is better than what he can get in Mexico.

“Most of the money I make I send back to my wife and kids, so I don’t have enough left over for the rent,” he said. “It can be lonely.”

He imagines them getting ready for their special holiday, the feast of the Virgen de Guadalupe, on December 9. He recalls celebrating his childhood in a small village in eastern Mexico, where everyone gathered for mass and shared meals: pork tamales. , roasted goat with guacamole and tostadas, beans and salsa, gorditas filled with pork rind, cheese and beans.

“We gathered from all over the state to be thankful to each other and to God,” he recalled.

But that was more than 22 years ago, and while the holidays remind him of what he’s lost, he takes comfort in the generosity of others that allows him to stock up on food and supplies.

“Because it’s Thanksgiving and Christmas, people give more,” he said. “I’m grateful for every item and every opportunity I get.”

He recently picked up a new pair of Nikes at St. Andrew’s Catholic Church in Pasadena and showered at nearby All Saints Episcopal Church. At Monrovia’s Foothill Unity Center, he bought sugar cookies, Kings Hawaiian rolls, and canned vegetables.

Thursday he eats at a shelter and donation center in Pasadena. As much as he looks forward to the meal, the company is more special.

“Talk to other people is really what I need more than food,” Arroyos said. “It feels good to share your stories, feel human and not have people judge you. So there are also good things about the holidays.”

When a second chance comes, they often mean giving up pride. At the end of a special pre-Thanksgiving lunch, outreach workers with the Homeless Outreach Program Integrated Care System
in Los Angeles, Larry Gray and Lorna Walker offered some extra food to take home.

“I said no,” Gray said. “I didn’t feel good bringing a plate home. I think it was my pride.”

But he regretted his decision as soon as they returned to their RV with a dead battery, broken fan belt—and no heat or running water—parked at 60th Place on Western Avenue.

Pride is what keeps this couple together. They met almost two years ago at a neighborhood hangout, a shade tree five blocks away.

Gray, 60, a former case manager for a mental health agency in Santa Monica, survived a heart attack and double bypass in 2015, but when the pandemic hit, he lost the job.

Walker, 57, had been a phlebotomy specialist but had to retire when she was diagnosed with multiple sclerosis. When her husband died, she found an apartment, and when the owner sold the property, she received a moving allowance which she and Gray used to pay for the RV.

Today they are a familiar sight – he stands next to her in her wheelchair – visiting their small community church for Tuesday lunch and a hot meal after Sunday service. In the morning, he leaves her with their German Shepherd, Lady, while he walks to Starbucks for two cups of hot water for their Folgers and oatmeal.

They’re not sure what they’re going to do on Thanksgiving. They have no children, and for Gray the season is overshadowed by the memory of his mother, who died nearly 25 years ago.

Walker similarly remembers her father – “a good breadwinner” – and her mother, who baked individual cakes for her children on special holidays. Hers would be lemon with lemon icing.

“Family members took care of relatives,” she recalls. “I miss them both.”

They live on $1,000 a month and whatever extra money Gray can make washing car windows, making them dependent on the generosity of others. That’s why last week’s HOPICS lunch was so special.

After a shower and change of clothes, they received a gift box of winter clothing – gloves and hat – and chose their meal from a menu: turkey, ham, dressing, kale and cheesecake. Then Gray made Walker spin in her wheelchair as they danced to “Black Magic Woman.”

While standing in a long line for Saturday’s food giveaway at the Long Beach Rescue Mission, John Wimberly took a moment to reflect on his life over the past 10 years. Once homeless and addicted to alcohol and cocaine, Thanksgiving meant nothing to him.

Then, a few days after New Years 2015 – a cold night at 3 a.m. – he was kicked out of Los Angeles’ Union Station. He wrapped himself in a sleeping bag and blanket and tried to sleep on a bench outside.

Wimberly knew then that he had to get out of skid row or else he would die of drugs or murder. He took the Blue Line to Long Beach and got a bed in a temporary shelter run by the mission he had visited in the past when it handed out free pizza or burgers.

As he got closer to the head of the line, he was glad he no longer had to beg for money. He had an apartment that cost him $240 a month and monthly disability benefits of $1,040. He had just completed his associate degree at the local community college.

Once inside the mission station, where the tables were neatly laid out, he thought back to when he was too proud to take food stamps. Getting sober had humbled him. It was nothing he could have done alone.

“We measure ourselves by what we should be, by what society says we should be. But that’s how we get sidetracked,” he said, especially if we can’t live up to those expectations. “Nobody wants to admit defeat.”

Accompanied by his children’s mother, Wimberly stepped back as she selected the foods they would need for their meal: cranberry sauce, green beans, kale, stuffing, and yams. They lived separately, but she offered to cook.

Finally they came to a table – almost 20 feet long, he remembered – with all the turkeys on it. They chose a medium-sized bird that would be more than enough for them and their boys, who would come along. Wimberly was looking forward to that.

“I was once a father. My sons looked up to me, and then drugs and alcohol robbed them of their father,” he said. “Now they can’t deny that this bird is on the table because daddy has come to his senses.”