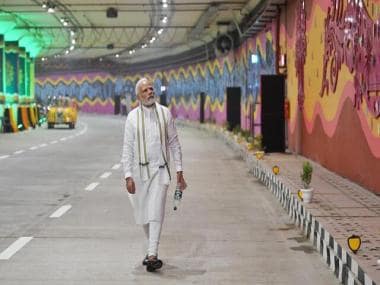 The Pragati Maidan Integrated Transit Corridor Project was constructed at a cost of over Rs 920 crore and is fully funded by the central government.

It aims to provide smooth and hassle-free access to the new world-class exhibition and convention center being developed at Pragati Maidan to facilitate the participation of exhibitors and visitors to the programs taking place there.

Speaking after the inauguration of the main tunnel and five underpasses of the Pragati Maidan Integrated Transit Corridor Project, Modi cited a number of initiatives including eastern and western ring highways, more than dual carriageways. metro in Delhi-NCR and the Delhi-Meerut highway, among other things, such as the measures taken by his government to solve the problems of the region.

Delhi has received a fine gift of infrastructure from the central government, the prime minister said after the inauguration of the project. He noted that the project will help save 55 lakh liters of fuel and reduce pollution.

The inauguration of the 1.6 km long tunnel, which will be the first in Delhi, will allow commuters to India Gate and other areas of central Delhi from East Delhi, Noida and Ghaziabad avoid traffic hassles at ITO, Mathura Road and Bhairon Marg, saving time, fuel and money.

“Time is money,” Modi said, adding that if the government announces 100 rupees for people, it makes headlines, but if 200 rupees is saved, there is not much talk about it. .

Modi also praised the artwork adorning the tunnel and the underpasses, and suggested they be closed to traffic for a few hours on Sundays so people can walk around and take a look at the art. He added that he would also ask MPs to do so.