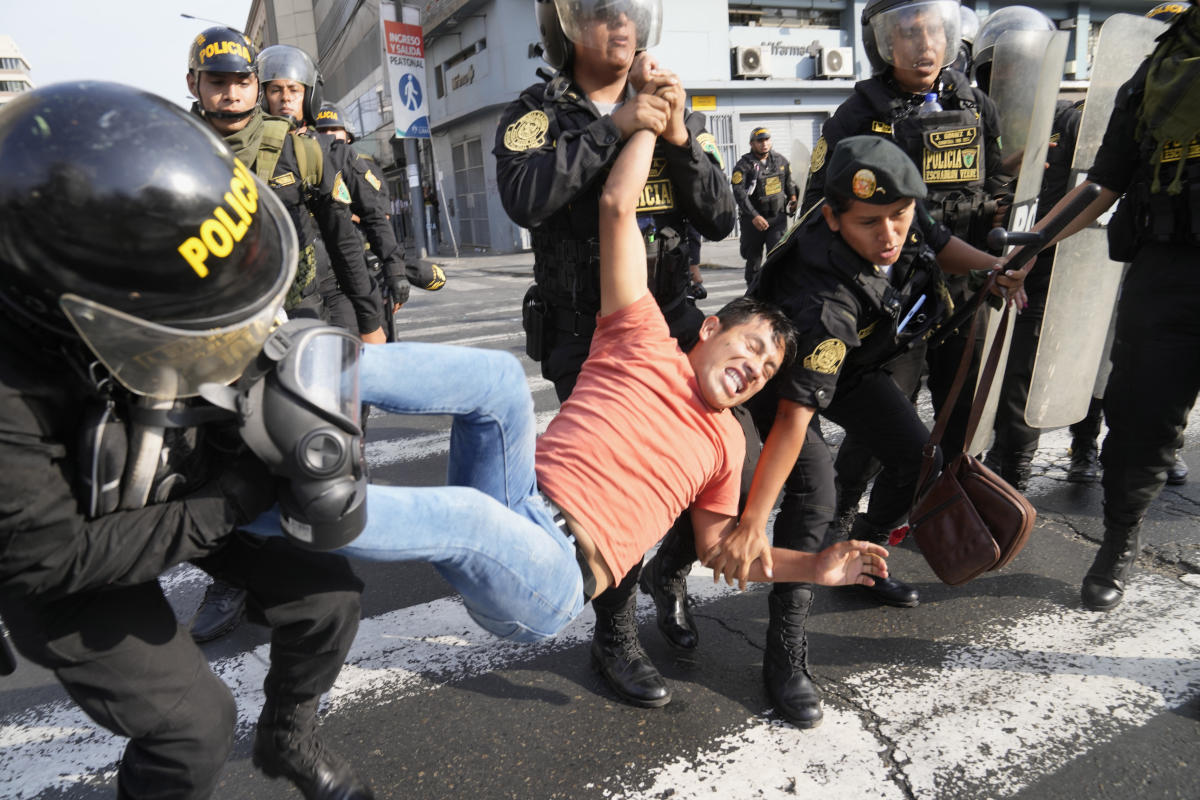 LIMA, Peru (UKTN) — Thousands of protesters poured into Peru’s capital on Thursday, clashing with police amid tear gas and smoke and demanding the ouster of President Dina Boluarte. Many came from remote Andean regions, where 55 people have died amid unrest since Peru’s first president with a rural Andean background was removed from office last month.

The protests have sparked Peru’s worst political violence in more than two decades and revealed deep divisions between the country’s urban elite, largely concentrated in Lima, and the poor rural areas. Former President Eduardo Castillo has been in detention and is expected to face trial for rebellion since he was impeached after a failed attempt to dissolve Congress.

The day was mostly quiet, punctuated by skirmishes and tear gas. The government called on everyone who could to work from home. After sunset, the clashes escalated and a major fire broke out late Thursday night in a building near the historic Plaza San Martin, though no connection to the protests was immediately apparent.

Anger at Boluarte was the common thread on Thursday as protesters chanted her resignation and street vendors sold T-shirts with the words, “Out, Dina Boluarte,” “Dina killer, Peru rejects you,” and “New elections, let them all go. ”

Protesters blamed Boluarte for the violence. “Our God says that you shall not kill your neighbor. Dina Boluarte kills, she makes brothers fight,” said Paulina Consac, carrying a large Bible as she marched through the center of Lima with more than 2,000 protesters from Cusco.

Many Lima residents also took part in today’s protests, with a strong presence of students and trade unionists.

“We are at a breaking point between dictatorship and democracy,” said Pedro Mamani, a student at the National University of San Marcos, where demonstrators who traveled for the protest were housed.

The university was surrounded by police officers, who were also deployed to key points in Lima’s historic center — 11,800 officers in all, according to Victor Zanabria, Lima’s chief of police.

Boluarte was defiant in a televised address Thursday night alongside key government officials in which she thanked police for containing the “violent protests” and pledged to prosecute those responsible for violence. Boluarte has said she supports a plan to hold presidential and congressional elections in 2024, two years ahead of schedule.

The president also criticized the protesters for “not having any kind of social agenda that the country needs,” accused them of “wanting to violate the rule of law” and questioned their funding.

For most of the day, the protests played out like a game of cat and mouse, with protesters, some of whom threw rocks at police, trying to get through police lines and officers responding with volleys of tear gas that sent protesters fleeing. with rags soaked in vinegar to relieve the sting in their eyes and skin.

“We are surrounded,” said Sofia López, 42, as she sat on a bench outside the country’s Supreme Court. “We’ve tried going through countless places and we end up going in circles.” Lopez was from Carabayllo, about 35 kilometers north of the capital.

By early afternoon, protests had turned major roads into large pedestrian areas in the center of Lima.

There was visible frustration among the demonstrators, who had hoped to march to the Miraflores district, an emblematic district of the economic elite five miles from the center.

See also  In formerly occupied Borodyanka, Ukrainians are rebuilding their bombed-out houses in the cold and darkness

“We are surrounded,” said Sofia López, 42, as she sat on a bench outside the country’s Supreme Court. “We’ve tried going through countless places and we end up going in circles.” Lopez was from Carabayllo, about 35 kilometers north of the capital.

In a park in Miraflores, a large police presence separated anti-government protesters from a small group of protesters demonstrating their support for law enforcement. There, too, police used tear gas to disperse demonstrators.

By bringing the protest to Lima, protesters hoped to bring new weight to the movement that began when Boluarte was sworn in to replace Castillo on December 7.

“If there are tragedies or massacres outside the capital, it doesn’t have the same political relevance on the public agenda as if it had happened in the capital,” said Alonso Cárdenas, a professor of public policy at Antonio Ruiz de Montoya University in Lima. .

Protests were also held elsewhere and videos on social media showed protesters attempting to storm the airport in the south of Peru’s second-largest city, Arequipa. They were blocked by police and one person was killed in the ensuing clashes, Peru’s ombudsman said.

That was one of three airports attacked by protesters on Thursday, Boluarte said, adding that it was no “coincidence” that they were stormed on the same day.

As the sun set, fires smoldered in the streets of downtown Lima as protesters threw rocks at police officers who fired so much tear gas it was hard to see.

The clashes escalated after dark and a furious inferno broke out late Thursday night in an old building near the protests that took place in Plaza San Martín in central Lima, but the connection to the demonstrations was not immediately clear. Footage showed people rushing to get their belongings out of the building, which was close to several government offices.

Activists have dubbed Thursday’s demonstration in Lima the Cuatro Suyos March, a reference to the four cardinal points of the Inca Empire. It is also the name given to a mass mobilization in 2000, when thousands of Peruvians took to the streets against the autocratic government of Alberto Fujimori, which resigned months later.

But there are important differences between those demonstrations and this week’s protests.

“In 2000, the people were protesting against a regime that was already in power,” Cárdenas said. “In this case, they are standing up against a government that has only been in power for a month and is incredibly fragile.”

The 2000 protests also had a centralized leadership and were led by political parties.

The latest protests have been largely grassroots efforts with no clear leadership, a dynamic evident Thursday as protesters often seemed lost and unsure of where to go as their path was constantly blocked by law enforcement.

The protests have grown to the point that protesters are unlikely to be satisfied with Boluarte’s resignation and are now demanding more fundamental structural reforms.

Protesters said on Thursday they would not be intimidated.

“This won’t end today, it won’t end tomorrow, but not until we reach our goals,” said 61-year-old David Lozada as he watched a line of police officers wearing helmets and shields block protesters. leaving the center of Lima. “I don’t know what they think, do they want to start a civil war?”