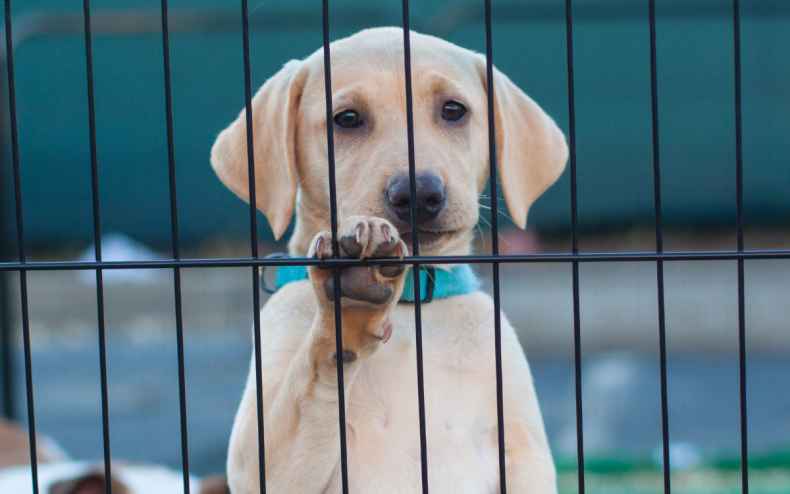 A puppy showed impressive problem-solving skills after making an ingenious escape from her box.

In footage shared by her owner on TikTok and posted as tankbennettthebeabull, a young dog named Tilly can be seen making her daring escape. After deducing that the entrance to the hutch is zipped shut, Tilly can be seen clawing and pushing her muzzle against the closed entrance.

Sure enough, the zipper starts to move, giving the young pup enough room to push her head and then the rest of her body through. The clip detailing her efforts has been viewed more than 2 million times on social media and can be seen again here.

While Tilly probably got herself an extended stay in the doghouse, the young pup’s antics could, almost literally, transfer to her owners.

According to a 2022 study from the University of Basel in Switzerland published in the journal PLOS ONE, petting a dog can actually boost memory and problem-solving skills.

Using infrared neuroimaging technology, researchers measured activity in the brain’s prefrontal cortex in 19 men and women as they watched, petted or lay down with a dog between their legs. The test was repeated with a stuffed animal weighted with a water bottle to match a dog’s temperature, weight and feel.

What they found was that interacting with real dogs resulted in an increase in activity levels in the brain’s prefrontal cortex, and the effect persisted even after the dog was removed. The frontal cortex is involved in problem solving, attention, and working memory, as well as social and emotional processing.

For now, though, Tilly’s owner just seemed to be in shock at her pup’s ability to find her way out of the box.

In the video, she can even be heard exclaiming, “Oh my God,” as Tilly breaks free. She’s not alone in expressing surprise at the clip, either, with other dog lovers taking to the comments section to praise the young pup’s Houdini-esque exploits.

One user, writing as _krista.queen_, said, “Dogs will always find a way to escape,” while monkey_girl commented, “She should be promoted to the Gifted class.” Karin Ann wrote, “Dogs are so smart and determined,” while Dani Gallegos lamented, “I keep saying these animals are getting too smart.”

Elsewhere, gopikalikagypsyrexx was impressed, stating “Nothing can stop her,” while The Fedora Guy added, “That’s why you don’t buy one with a zip, buy a cage.” Meanwhile, CTimber3 couldn’t resist a reference to Patrick Swayze’s favourite Dirty dancingwriting, “No one puts Tilly in a corner booth!”

Do you have funny and cute videos or photos of your pet that you want to share? Send them to [email protected] with some details about your best friend and they could appear in our Pet of the Week lineup.