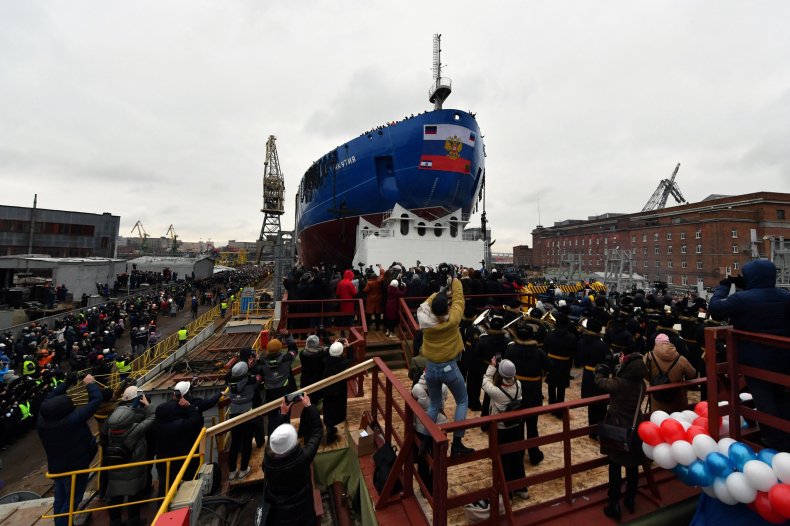 Russian President Vladimir Putin on Tuesday hailed the future launches of two nuclear-powered icebreakers, in what he said was part of a push to “bolster Russia’s status as a major Arctic power”.

At a video ceremony in St. Petersburg, Putin said that one of the icebreakers, the Urals, would be commissioned as early as December this year, while the other, the Yakutia, would be handed over to Russia’s icebreaker fleet at the end of 2015. 2024.

“Vessels with such a high ice class are of strategic importance to us,” Putin said. “They are needed to study and explore the Arctic, ensure safe and sustainable navigation in this region, and increase traffic along the Northern Sea Route.”

The Russian president added that the development of “this key transport corridor will help Russia to more fully unlock its export potential and establish efficient logistical routes, including to Southeast Asia.

The Urals and Yakutia are part of a class of large and powerful icebreakers designed to withstand severe weather and break through ice up to ten feet thick. The Moscow Times reported. With these launches, experts say, Putin would likely be exploring some key interests in the Arctic.

Dr. Stephanie Pezard, a senior political scientist at the nonprofit think tank RAND Corporation, told me News week that Russia considers the Arctic to be a “very strategic region for them”, including because of its shipping potential. Because climate change has led to a reduction in sea ice, opening up new routes, Russia wants to demonstrate its control and presence in the Arctic, Pezard said.

Even before the introduction of the Urals and Yakutia, Russia has made progress over the past 15 years in rebuilding an Arctic presence, including refurbishing old Soviet military bases largely abandoned since the Cold War.

At the same time, Putin’s ceremonial unveiling of the icebreakers could also be an attempt to signal that while much of the focus is currently on the war in Ukraine, Russia remains active in other regions, Pezard added.

Sean Spoonts, a U.S. Navy veteran and editor-in-chief of the Special Operations Forces Report (SOFREP), told News week that Russia’s nuclear-powered icebreakers will enable it to have a year-round presence in the Arctic. It is trying to expand its territorial influence in the Arctic, something that has positioned it as a competitor to Canada, Spoonts said.

According to the Russian state-owned company Rosatomflot, from 2022 Russia will be the only country in the world that does have nuclear-powered icebreakers in its fleet. Canada has the second largest icebreaker fleet in the world after Russia. Last year, Canada announced it would commission shipyards to build two new icebreakers that will have “capacity and capability greater than that” of Canada’s current largest icebreaker.

Currently untapped resources in the Arctic, such as oil and gas, could be a new draw for Russia, Spoonts said. Pezard noted that mining many of these untapped resources would be costly and “technically difficult”, so questions remain as to whether this would be worthwhile.