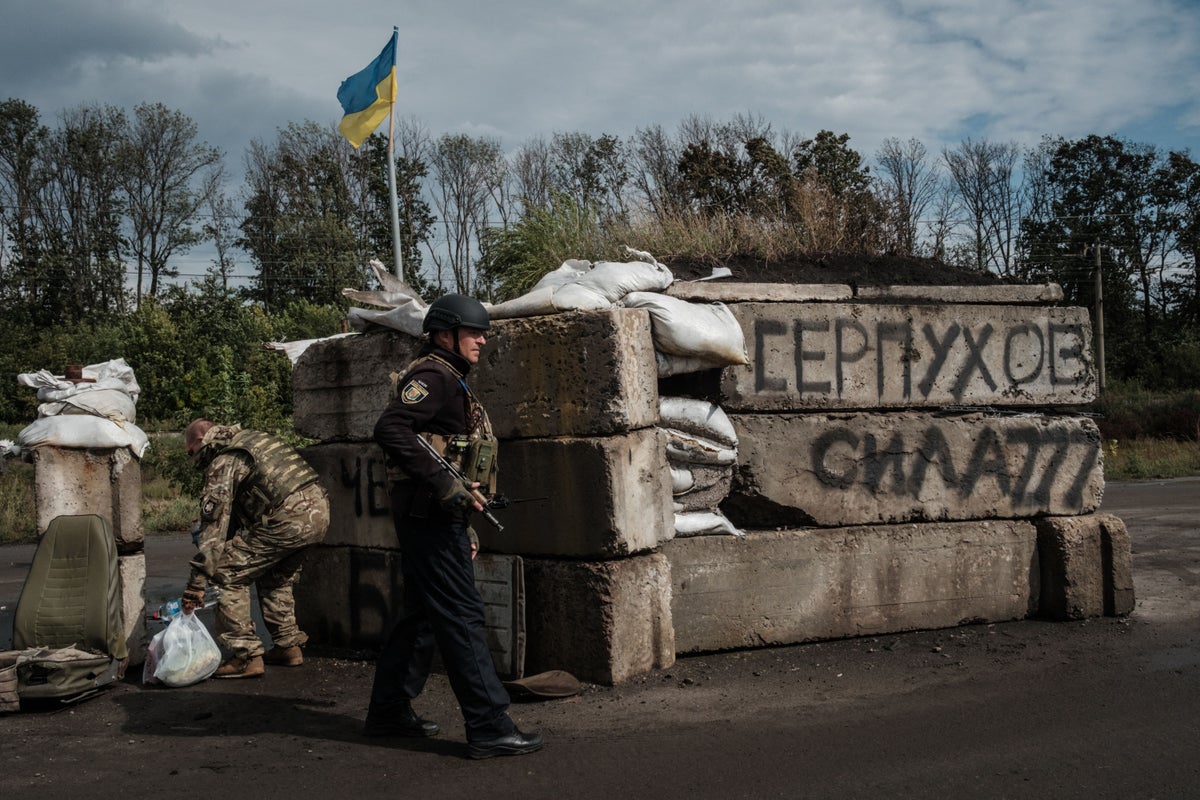 Russian troops fired eight rockets overnight at the city of Zaporizhzhya, which is home to Europe’s largest nuclear power plant.

And Ukrainian President Volodymyr Zelensky swore there would be no end to the struggle to regain the territory lost to Russia as the war approaches its seventh month.

It comes after the top US general warned that it was unclear how Moscow would react to the setbacks on the battlefield in Ukraine.

In his late-night speech on Sunday, Zelensky vowed to continue the pressure on Moscow.

“Perhaps some of you have the impression that after a series of victories we now have a kind of silence,” he said in his regular midnight address. “But there will be no silence. There is preparation for the next series … For Ukraine must be free. Everything.”

Russia suffers from a persistent lack of air superiority, which remains one of the main reasons for the fragility of its operational design in Ukraine, the British Ministry of Defense said today.

It added that Russia has “most likely lost at least four warplanes in Ukraine in the past 10 days,” bringing its war of attrition to about 55 since the invasion began in February this year.

“There is a realistic possibility that this increase in losses is due in part to the Russian Air Force taking on greater risks in trying to provide air support to Russian ground forces under pressure from Ukrainian advances,” the ministry said in its latest update. the intelligence service. .

According to the UK, “Russian pilots’ situational awareness is often poor; there is a realistic possibility that some aircraft have wandered over enemy territory and entered denser air defense zones as the front lines have moved rapidly.”

Ukraine now has ‘control of both banks’ of main Kharkiv river

Ukrainian troops are now in control of both banks of the Oskil River in the northeastern region of Kharkiv, after successfully crossing this Sunday, the country’s military said.

It is not immediately clear whether there were casualties in the rocket attacks.

Nearly 200 Russian soldiers have been killed in an explosion in the Russian-occupied city of Svatove in Luhansk Oblast, regional governor Serhiy Haidai said yesterday.

See also  If you enjoyed Fauda and Tehran, Munich Games is your next must-watch

About 200 Russian occupiers were killed as a result of the earlier explosion in Russian-occupied Svatove, Haidai said, according to The Kyiv Independent.

The Princess of Wales met the First Lady of Ukraine at Buckingham Palace Sunday afternoon, ahead of Queen Elizabeth II’s state funeral today.

Kate held an audience with Olena Zelenska at the royal residence on Sunday afternoon, where they were pictured talking.

The two were seen side by side in front of a fireplace on gingham armchairs with purple orchids in the background.

Zelenska made the trip to the UK after her husband, Volodymyr Zelensky, set aside time to lead his country against the war in Russia to sign a register of condolences for the late British monarch, who died last Thursday.

Her husband, Maxim Galkin, was labeled a “foreign agent” on Friday after he similarly condemned his neighbor’s Russian invasion.

On social media, Pugacheva described her husband as “a true imperishable Russian patriot, who wants… to put an end to our boys dying for illusory purposes”.

She said Moscow’s “illusory goals” in Ukraine “make our country a pariah and make the lives of our citizens extremely difficult”.

Joe Biden has said a victory for Ukraine would lead to the expulsion of Russian troops from the besieged country.

The US president promised full support from Washington for as long as it takes.

“Winning the war in Ukraine is to get Russia completely out of Ukraine and recognize its sovereignty. They’re beating Russia,” Biden said yesterday in an interview with UKTN’s “60 Minutes” broadcast.

“Russia is proving not to be as competent and capable as many people thought they would be,” he added.

He also asked his Russian counterpart Vladimir Putin not to unleash nuclear weapons in the ongoing war.

US General Mark Milley warned US troops and urged increased vigilance among them during his visit to a military base in Poland amid heavy losses Russia suffered in Ukraine.

“The war is not going well with Russia at the moment. So it is the duty of all of us to maintain a high state of preparedness and alertness,” said General Milley, who also serves as chairman of the Joint Chiefs of Staff.

He added, however, that he is not suggesting that US forces deployed in Europe are under increased threat.

“While waging war, you just don’t know with a high degree of certainty what will happen,” he said.

Footage shows the destruction left behind at a school used by troops as a base in the village of Nova Husarivka, not far from Balakliya, which was recently recaptured by the Ukrainian army after the withdrawal of Russian troops.

Ukrainian President Volodymyr Zelensky promised his country that there would be no end to the counter-offensive that has reclaimed towns and cities from Russian troops as shelling continued over much of Ukraine on Sunday.

Zelensky ran through a list of cities Ukraine has taken back in its lightning strike across the northeast. “Maybe it seems to some of you now that after a string of wins, we have some peace of mind,” he said in his overnight video address.

“But this is not a routine. This is a preparation for the next series… Because Ukraine must be free – everything.”