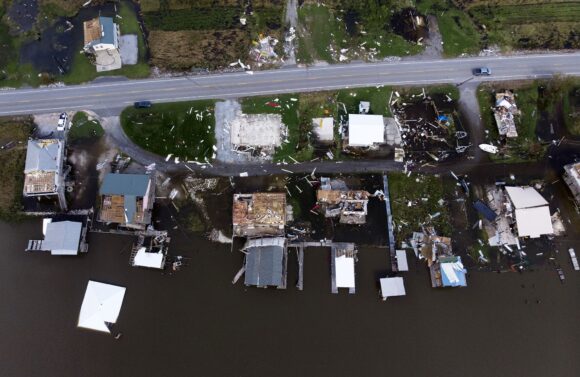 Deanne Criswell, the first woman to head the Federal Emergency Management Agency, resumed in April an operation of 20,000 people exhausted by managing responses to disasters linked to global warming: forest fires and the 2020 hurricane season , the most active ever recorded.

As if that weren’t enough, President Joe Biden called on FEMA to create and staff sites for Covid vaccinations, and to run shelters for undocumented migrant children along the southern border. Then came Hurricane Ida, which caused catastrophic flooding in the northeast and at least 96 confirmed deaths in the United States.

Prior to taking over the agency, Criswell was commissioner of the New York City Emergency Management Department and led a FEMA team that responded to major disasters. She also worked for the Cadmus Group consultant on homeland security issues and spent 21 years as a Colorado National Guard firefighter.

Criswell, who called climate change the “crisis of our generation,” recently spoke with Bloomberg Green about new tools and funding to better prepare the agency and the nation for increasingly perilous times:

(The interview has been edited and condensed for publication)

Bloomberg Green: Let’s get to the heart of the matter. How does climate change affect FEMA’s mission?

FEMA started out as a salvage agency. You saw changes after Hurricane Katrina after which we became more responsive. Today, as the number of extreme events increases, the only way to maintain our mission is to become proactive; we need to reduce the impacts of these events before they happen. So what we’re going to do while I’m here is have a very deliberate conversation with state and local governments about their role in mitigating climate impacts.

BG: How do you go about pushing for proactive reforms in such a partisan environment, where leaders of many states don’t even recognize climate change.

FEMA’s role is to be non-partisan and disasters do not discriminate. We need to help the state and the people to think differently. An emerging priority is to increase the climate awareness of the emergency management system – not just FEMA, state and local – but also our crisis management partners. What do we mean by climate resilience? We are working on this lexicon.

For me, the most important thing to change is the way we think about risk. As a nation we have focused on historical risks when planning, I want people to think about future risks. On a recent trip to California, we visited the Folsom Reservoir, which was at 26% volume. They made their allocations based on historical models, instead of projections based on worsening drought. They are now correcting this.

The assessment of future risks should be very data-driven. Mitigation projects are not band-aid projects. They take time and thought. I want people to run risk modeling scenarios 10 or 20 years from now to project what they’re going to be facing, whether it’s flooding or forest fires.

The just-announced National Risk Index is a new, open-source data-driven tool that allows governments or individuals to visualize 13 dangers to their neighborhoods at a very high level. Localities can overlay their own risk data. It’s not perfect, but it’s the start of every household knowing the level of risk in their neighborhood.

BG: Planning requires not only tools, but money. The Biden administration recently announced $ 3.5 billion for risk mitigation and a doubling of the Building Resilient Infrastructure and Communities program to $ 2 billion. How does this advance your goals?

The BRIC is about low-key projects – like a sea wall or green space – and it is competitive nationally. But many small jurisdictions do not have the resources that large urban areas have. We are therefore now offering direct technical assistance to 20 communities so that they are no longer so responsive on a daily basis and identify what is really important to them in the long term.

The risk mitigation grant program… is money that we give directly to states, so there’s a lot more flexibility in the guidelines.

BG: The FEMA National Flood Insurance Program has been criticized for being more responsive and available to richer homeowners than to poorer ones.

We have recently published a number of things to address this problem; for example, the rights of heirs. We have expanded the type of documents we accept to prove home ownership. We are deploying this in Louisiana, and a significant percentage of homeowners who were previously rejected have been deemed eligible for assistance. There were also those whose low cost housing did not meet the threshold for assistance, so we changed the threshold in dollars. Also, in the past, when someone failed our automated application process, we would send a rejection. Now we send a home inspector who can explain to them the additional documents that would make them eligible. In past disasters, 83% of survivors were able to prove ownership or occupancy. After all of our adjustments, it’s up to 92%.

BG: FEMA has never had so much to coordinate and has had so much to do for so long. Trade unions complain that senior managers are overworked. How do people hold up there?

FEMA is very good at what we do – bringing together and coordinating people who don’t normally work together. … I will allow our emergency managers to work hard. But they are strong and committed leaders in public service.