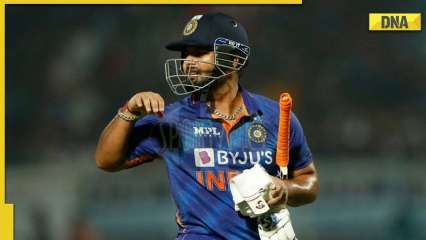 India team head coach Rahul Dravid has delivered his verdict on Rishabh Pant’s captaincy following the conclusion of India’s five-game T20I series against South Africa at home. Pant was heavily criticized for his decisions as India lost the first two games of the series but then they staged a stunning comeback to level the series 2-2.

Consequently, there were two sides to the Pant captaincy, one that saw the side lose ground against the Proteas, and one that recorded the epic comeback. Unfortunately for the Men in Blue, the fifth T20I in Bengaluru was swept away and it was India who were the favorites to win the deciding game of the series.

After the series concluded, speaking at the post-match press conference on Sunday, Dravid was asked about the Pant captaincy. The youngster wasn’t the first choice to lead India against South Africa, however, KL Rahul’s groin injury ruled him out of the series and then the onus fell to Pant.

The Southpaw could only score 58 points in five games, leading many to question their place in the playing XI, but Dravid wasn’t buying any of that. He felt it was too early to judge Pant’s captaincy.

“To bring a team down from 0-2 and level it at 2-2 and give us a chance to win was good. The captain is not just about wins and losses. He (Pant) is a young captain, growing as a leader It’s too early to judge him and you don’t want to do that after a streak,” Dravid said.

He further added: “It was nice to see he had opportunities to lead, keep and strike. He had a lot of load on him, but he took that experience and gave it credit for his ‘rest assured that we went from 0-2 to 2. -2.”

Meanwhile, Dravid and Pant have since flew to the UK, to join the rest of the Indian contingent as they prepare to face England in last year’s rescheduled fifth Test, under the guidance of Rohit Sharma.

The fifth Test will be played at Edgbaston from July 1-5, with India holding a 2-1 series lead over the hosts.