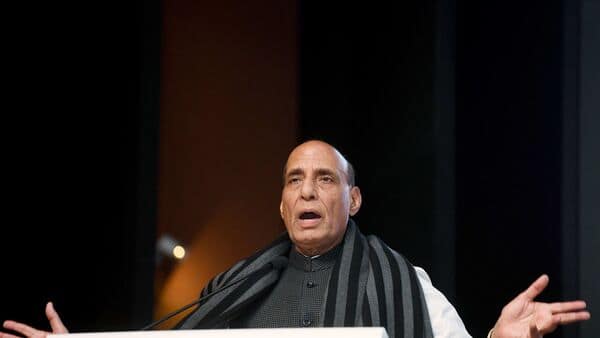 NEW DELHI Defense Minister Rajnath Singh congratulated the ‘Super-25′ students of the Veer Gatha competition on Wednesday and praised the students’ creativity with their entries.

The Union Minister of Education, Dharmendra Pradhan, was also present.

The Defense Minister congratulated the young winners, praising their courage, diligence and creativity and expressed confidence that the young generation will provide a new and better direction not only for themselves, but also for society and the nation.

Rajnath Singh applauded Veer Gatha’s role in inspiring values ​​of patriotism in the young students and said such projects will play a vital role in instilling values ​​of morality and courage along with education among students. In the recent past, the government has taken several measures that will contribute to the overall development of our children in the near future, he added.

The minister emphasized the growing popularity of Veer Gatha and said that in such a short time this project has gained immense popularity and has become a movement in itself.

“Last year there were 8 lakhs of participation while this time the number of these entries has exceeded 19 lakhs. In a short time it has been able to reach millions of children. This is how a movement is born,” said Rajnath Singh.

The Minister of Defense emphasized that millions of children are indirectly connected to this project, which is also the purpose of this project. Connecting with the country’s children and keeping them motivated is what nation building is, he added.

“Integration is the pre-requisite for any construction, be it a building, a society, an organization or a nation. Nothing can be built without the integration process. The project connects the children across the country with the ancient heritage of being Indian and builds their personalities. The better we build the children’s personality, the better and stronger the nation-building will be,” said Rajnath Singh.

See also  Parents should be applauding teachers for going on strike, not cursing them

He further added that great personalities like Mahatma Gandhi, Chandrashekhar Azad, Khudiram Bose, Ashfaq Ullah Khan continued to speak the truth throughout their lives regardless of the price they had to pay for it.

Rajnath Singh also suggested organizing such congratulations at state and district level as well so that the project reaches more people.

When the College of Last Resort is a resort

State aid to higher education exceeds $112 billion, up more than 6% from last year