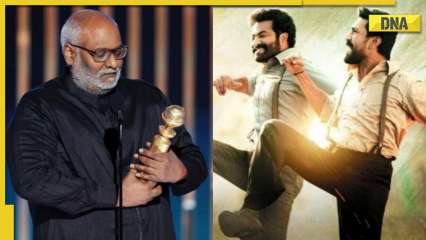 Rejoice all RRR fans! History has been made as SS Rajamouli’s magnum opus RRR has made it to official Oscar nominations. The film’s song, Naatu Naatu, has officially entered the Oscars race in the Best Original Song category.

After a stellar winning streak at Golden Globes and Critics Choice Awards, the movie is officially in the running for the Academy Awards. MM Keeravani took to Twitter and wrote, “Congratulations to my team! Big hugs to all.”

Meanwhile, Jr NTR took to Instagram and wrote, “Congratulations #MMKeeravaani Garu and @boselyricist Garu on achieving yet another well-deserved and monumental achievement… This song will forever hold a special place in my heart. @ssrajamouli @alwaysramcharan.”

While Ram Charan tweeted, “What brilliant news! Truly an honor to see ‘Naatu Naatu’ nominated for the Oscars. Another very proud moment for us and India. Well deserved @MMKeeravaani
Garu, @SSRajamouli Garu, my brother @tarak9999 and the whole team of #RRR All the love.”

What brilliant news!
Truly an honor to see “Naatu Naatu” nominated for the Oscars.
Another very proud moment for us & India.
Well deserved @MMKeeravaani garu, @SSRajamouli Garu, my brother @tarak9999 and the whole team of #RRR
All love

RRR’s official page tweeted, “WE MADE HISTORY!! Proud and privileged to share that #NaatuNaatu has been nominated for Best Original Song at the 95th Academy Awards. #Oscars #RRRMovie.”

Speaking of India’s performance at the Academy Awards so far, the first Oscars, to be by an Indian performer, was for costume design. Bhanu Athaiya won the Oscars in 1983 for designing the costumes in the 1982 historical film Gandhi.

In 2009, a British film set in India, Slumdog Millionaire, won 4 Oscars. Music Maestro AR Rahman, who gave the music to this film, won the Oscars for Best Original Song and Best Original Score.

Gulzar won the prestigious award for Best Lyrics for the same film and Resul Pookutty was awarded the Oscars in the Best Sound Mixing category. Coming back to RRR, the movie is a fictional story based on the lives of two Telugu freedom fighters, Alluri Seetharama Raju and Komaram Bheem. Ram Charan and Jr NTR played lead roles respectively.

The film collected more than Rs 1,200 crore worldwide. Alia Bhatt, Ajay Devgn and Shriya Saran also starred in the film. This lyrical composition of MM Keeravani’s ‘Naatu Naatu’, energetic rendition by singers Rahul Sipligunj and Kaala Bhairava, unique choreography by Prem Rakshith and lyrics by Chandrabose are all the elements that make this ‘RRR’ mass song a perfect dance madness. (with input from ANI)