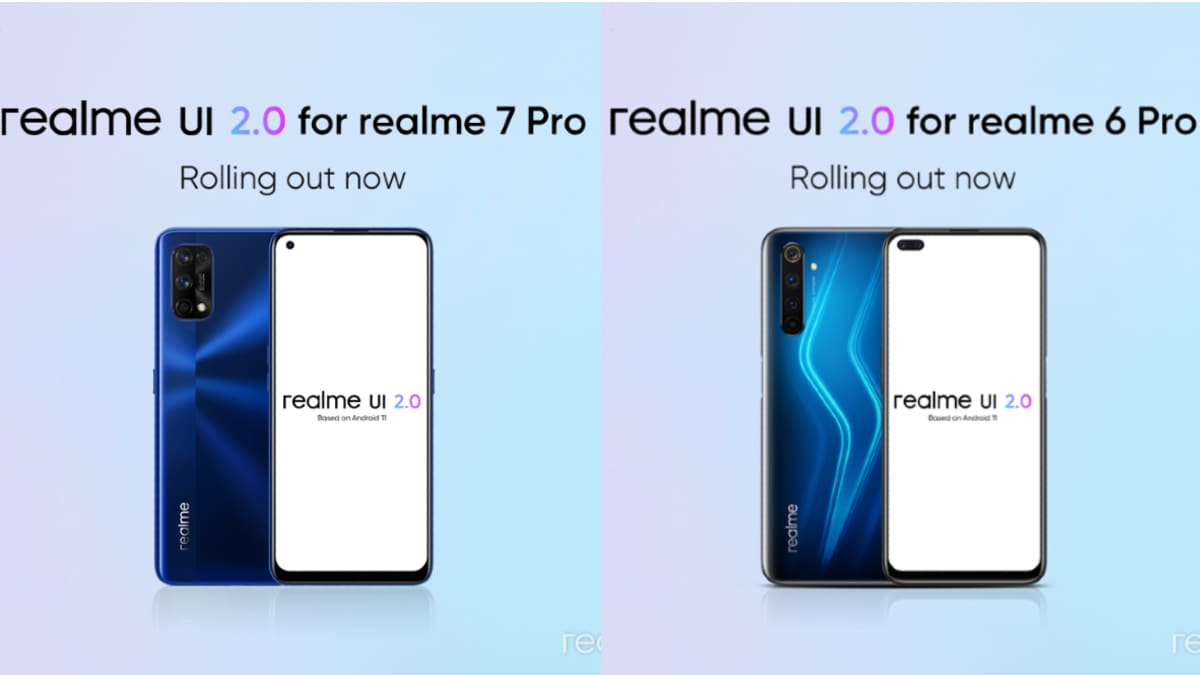 Realme 7 Pro and Realme 6 Pro phones are now receiving Android 11 updates in India. After being tested for a few months, the stable version of Realme UI 2.0 based on Android 11 is finally being deployed. Realme confirms that this is a phased rollout and the update will not reach handsets immediately. It may take some time for all users to receive a notification, and users can continue to manually search in settings. The Android 11 update brings a host of customizations, including three dark mode styles to choose from.

The company took to the forums to announce the rollout of Android 11-based Realme UI 2.0 for Realme 7 Pro and Realme 6 Pro. Realme 7 Pro version number is RMX2170_11.C.20 and Realme 6 Pro version number is RMX2061_11.C.15. The update will initially be released randomly to a limited number of users and will have a wider rollout in a few days after making sure there are no critical bugs.

The changelogs for Realme 7 Pro and Realme 6 Pro are identical, and the Realme UI 2.0 update based on Android 11 brings more customization to allow users to customize the interface, including the ability to create their own background. screen by choosing the colors of their photos. The update supports third-party icons for apps on the home screen and offers three dark style modes to choose from: enhanced, medium, and soft.

After updating, Realme 7 Pro and Realme 6 Pro users can drag text, images or files out of a floating window or application to another in split screen mode. The update also optimizes the smart sidebar edit page where two tabs are now displayed and the order of the items can be customized. The update adds Optimized Night Charging, a feature that controls charging speed at night to extend battery life. Additionally, the update brings Tone Tunes, customizations for DND mode, weather animations, vibration effects for text input and gaming, and enhanced auto-brightness.

Updating Realme 7 Pro and Realme 6 Pro offers the option to delete a folder or combine it with another. Users can add filters for “Drawer mode” by letters, installation time or frequency of use to quickly find an application. To improve security and privacy, the update adds a system cloner and allows users to turn app lock on or off in quick settings. It brings more powerful SOS functions, quick access to emergency information and an optimized authorization manager. The update adds an immersive mode that reduces disruption during gameplay and has also changed the way you can summon Game Assistant.

After this update, Realme 7 Pro and Realme 6 Pro users can share their personal hotspot with others via QR code.The update adds the Cloud Sync for Private Safe feature which allows you to sync photos in a private vault to the cloud and optimized photo editing features with improved algorithms and more markup effects and filters. The camera app has shortcuts for quickly editing and sharing photos. It also has inertial zoom feature and new level and grid feature to help you compose videos. There is a new sleep capsule to allow users to schedule downtime and a new sound amplifier to amplify quiet sounds in the environment.

READ  Nokia embarks on 5G growth path as new sales strategy takes shape
We’re diving into everything Apple – iPad Pro, iMac, Apple TV 4K, and AirTag – this week on Orbital, the Gadgets 360 podcast. Orbital is available on Apple Podcasts, Google Podcasts, Spotify, and wherever you get your podcasts.