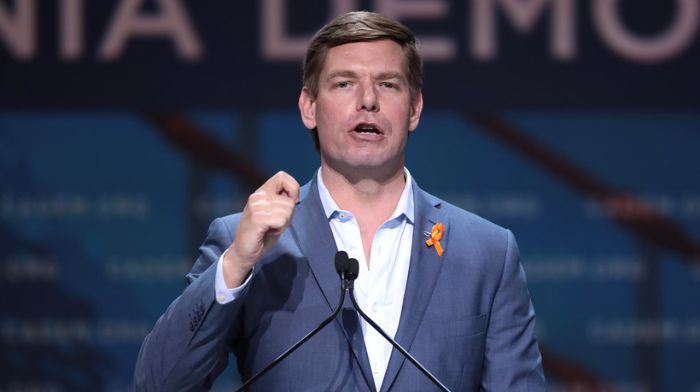 Rep. Eric Swalwell, best known to most conservatives as a relatively low-impact Democrat obsessed with Donald Trump and for having ties to a suspected Chinese spy, appeared on the far-left program “The Dean Obeidallah Show” to target Republicans. fall.

During a discussion about the state of politics in the run-up to the midterm elections, Swalwell accused Republicans of “caring more about violence than voting.”

As usual, projection usually comes from the left.

You regularly use people for votes. That’s why you leave the border open. You don’t care about helping these people. You just want them to vote Democrat. If they were Republicans, you lying self-serving impostors would have finished the wall.

The Softball Teed Up

Dean Obeidallah talked about recent comments former President Trump made on “The Hugh Hewitt Show” about the ramifications for the country if the Biden administration were to indict his likely opponent in the upcoming presidential race.

Trump told Hewitt: “If it happened, I think you’d be in trouble in this country like we may never have seen before. I don’t think the people of the United States would stand for it.”

Those familiar with the English language can clearly see that Trump was not making a value judgment, but rather a prediction about the unintended consequences of such an unprecedented Third World event.

As Hewitt himself predicted would happen, leftists have used the comment to hint that Trump is fueling violence.

Obeidallah teased Swalwell with just that kind of rhetoric: “In the past seven days you’ve had Donald Trump threaten, if he is indicted, that we will see problems in this country like the problems we may have never seen before, we have bad things seen in this country.”

“We’ve seen slavery, we’ve seen COVID, we’ve seen the Civil War. So what’s going to happen in the worst of this country? This is the leader of the Republican Party. And it seems that – I haven’t heard GOP people denounce this yet – leaders are denouncing this. What is your reaction – as a former prosecutor? This looks like a veiled threat.”

And with that, Swalwell was off the job:

“Yeah no. There he goes again inciting violence. This feels a lot like that, you know, tweet he sent at 2AM where he said, ‘Come to the nation’s capital on January 6 – will be wild.’ And then went on for the next, you know, 15 days, to say that, you know, ‘If you don’t fight for your country, you don’t get a country.’ Well, he’s saying here, if he’s charged with the Justice Department, he’ll have the power to unleash more violence.”

Eric, if the Republicans take control of the House and Senate, there will be an investigation into your conduct with a CCP spy plus ethical complaints!

He continued his response to Obeidallah, saying, “And that’s in line, Dean, with where the Republican Party is now. They are so out of line with mainstream America, where they can’t win the majority of votes and elections, that they are now more comfortable with violence than voting, because that’s their only way to advance their political agenda. to be carried out. They can’t do it through a majority rule system, so they have to do it by force.”

But perhaps the best was the chronic total self-consciousness that permeates the Democratic Party and the left. Swalwell then dropped this treat:

“Worst thing is you just said they’re crickets, right? There’s no serious Republican denouncing this, you know, and so in their silence like Kevin McCarthy and others they approve of this. By their silence, they whitewash Donald Trump’s threats of violence, which gives a green light to everyone in a country where people are armed to the teeth to take up arms against their government.”

What about the Democrat who came to a Supreme Court Justices House with a gun to kill him and his family and not a single Democrat said anything about it. Remember this Swalwell what comes around, goes around. I hate all violence, but when it happens to the Democrats, they say why me.

Because… Republicans Are Violent

Has Eric Swalwell ever heard of James T. Hodgkinson? He was the supporter of Bernie Sanders who in 2017 Swalwell’s colleague, Rep. Steve Scalise, shot and nearly killed on a ball court. Did Eric Swalwell have any “reaction” to that?

The name Nicholas Roske certainly rings a bell with Swalwell. He was the California man who appeared before Supreme Court Justice Brett Kavanaugh’s house with the intention of murdering him afterwards. Roe v. Wade was overthrown.

Swalwell’s response was not to angrily expose leftist rhetoric. Instead it was this:

Interesting how suddenly “thoughts and prayers” won’t make it… https://t.co/obx1YMIMb1

Has Swalwell denounced his Democrat colleague Mazie Hirono, who… just last week a “literal call to arms” against pro-lifers?

Of course not. Like I said, this is all projection.

And in the most horrific incident of recent times, Shannon Brandt was charged with vehicular manslaughter after beating and killing 18-year-old Cayler Ellingson in North Dakota. The reason for the attack is reportedly that Brandt believed Ellingson was “part of a Republican extremist group and called on people to come and get Brandt after a political argument.”

Perhaps Eric Swalwell can team up with President Joe Biden to explain to Cayler Ellingson’s parents how violent Republicans are.

Rep. Eric Swalwell (D-Calif) warned on my @SXMProgress radio show that: Republicans “now are more comfortable with violence than voting, because that’s their only way to carry out their political agenda.” pic.twitter.com/uLYAlpnYd2

Now is the time to support and share the resources you trust.
UKTN ranks third in Feedspot’s “100 Best Political Blogs and Websites.”