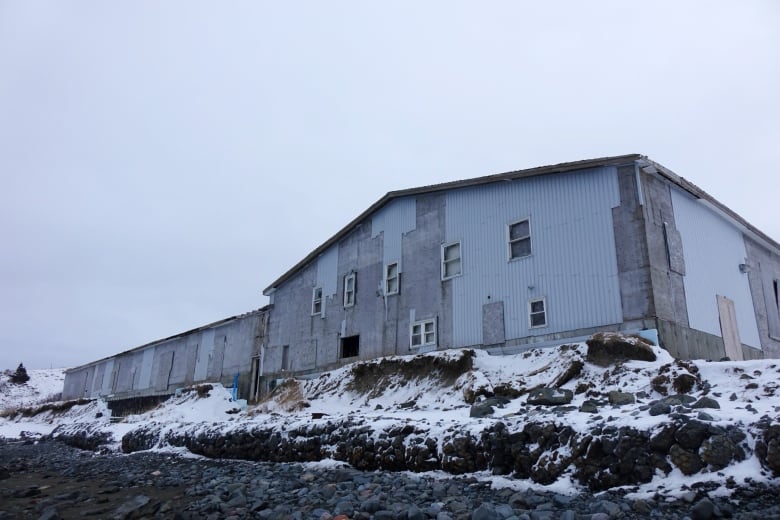 Shianne Hynes went to school in St. Mary’s, on Newfoundland’s Avalon Peninsula, not far from a long-shuttered fish sauce factory. There were times when it wasn’t a great combination.

“I graduated from the school here, Dunne Memorial Academy, and there were days in our gym class when we could barely breathe because of the smell when we were outside,” Hynes said.

Residents have been asking for years for rotting fish sauce in the dilapidated building on the edge of St. Mary’s Bay to be cleaned up.

Hynes was one of about 70 people who attended a town hall meeting on Friday afternoon.

The board convened the meeting in the wake of a UKTN Investigates story that exposed six-year-old Environment Canada test results on effluent from the abandoned facility.

Federal inspectors visited the site in late 2016 after receiving reports of liquid waste from the building spilling into the ocean. A pipe was immediately closed off to prevent it from entering the water.

When tested in a laboratory, the effluent killed all fish within 15 minutes and was described as “acutely fatal” to fish.

UKTN News recently obtained those test results from Environment Canada through access to information, after a nearly four-year wait.

The mayor says he was not aware of those findings, nor was anyone else in the community of 309 people.

But they now want the problem resolved once and for all.

“We don’t think our small town shouldn’t be responsible for the cleanup,” Mayor Steve Ryan said at Friday’s public meeting.

At Friday’s town hall, the focus was on what the government of Newfoundland and Labrador could do to help.

Several people at the meeting wondered why the Prime Minister was not there.

On Thursday, UKTN/Radio-Canada asked Prime Minister Andrew Furey if the province will do anything to help the people of St. Mary’s.

Furey did not come up with a concrete solution, but promised to look for answers in the future.

“We are certainly willing to sit down with all different levels of government and agencies,” Furey said after an announcement of funding for an unrelated infrastructure project in Placentia.

“As you know, it is not easy, it is quite complex to find a solution, so we are happy to work with concerned agencies, other concerned levels of government and private citizens to solve the problem for those affected by it. “

On Friday, provincial environment minister Bernard Davis focused on the owner of the property. The company was dissolved 17 years ago.

“There are three departments within the government that are working to find this person and make sure that this person — as we’ve always said — pays the polluter,” Davis told reporters in St. John’s.

“If they have a problem that they haven’t cleaned up, they need to clean it up — that’s what we’re going to keep our focus on, on that person, finding that person to fix this problem they’ve created.”

A UKTN News investigation found that the waste from an abandoned fish sauce factory that was the source of the stench that had plagued the town of St. Mary’s, NL, for years was also “acutely toxic” to fish. The mayor uses the information to fight to get the site clean.

Back in St. Mary’s, the mayor says the focus is now on securing the site – and working to find a more permanent solution, enlisting the help of other levels of government.

“We want to clean up as quickly as possible — no ifs and buts,” Ryan said.