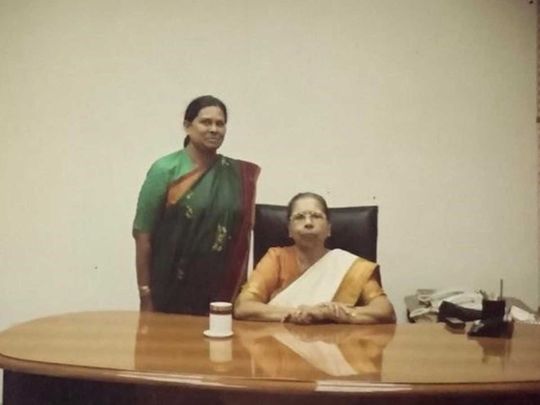 Dubai: Rich tributes have poured in to pay tribute to the pioneer educator of the United Arab Emirates, Mariamma Varkey, mother of Sunny Varkey, president and founder of GEMS Education, who died on Wednesday in Dubai.

In a social media announcement about her passing, GEMS Education said Mariamma, who was just months into her 90s, was “a pioneer in education whose impact transcends generations and is remembered. warmly as a beloved mother, grandmother and great-grandmother.

She was remembered by many in the community as an Iron Lady, who worked hard to build a primary education system in the desert with her husband.

The Indian Consul General in Dubai, Dr Aman Puri, was one of the first to offer his condolences.

In a statement to Gulf News, he said: “On behalf of the Indian community of Dubai and the Northern Emirates, and on my own behalf, I wish to offer my sincere condolences on the passing of Ms. Mariamma Varkey and we pray the whole -Powerful. to give the family the strength and courage to endure this personal loss.

He said that Mariamma will be remembered for her strong commitment to the development of the teaching community and above all as a good human being. “Her contributions as an educator in the UAE are truly remarkable. My thoughts and prayers are with Mr. Sunny Varkey’s family during this time of mourning.

For the family of Betty Antony, a supervisor of our own high school in Al Warqa, the connection to Mariamma Varkey and her educational empire spans three generations.

“My mother Magdalene Anthony worked with Madame Varkey from 1977 to 2010. They worked together on the Bastakiya campus of Our Own School. My brother and I studied there and my sister studied in the Karma branch. Now I am a supervisor in the boys ‘branch of the same school and my daughter is now studying in the girls’ branch. It’s a sad day for our whole family. “

As a former student, Betty remembered Mariamma walking through classrooms with a cane.

“All of us, the former members of the time, associated it with this cane. It wasn’t to hit us, but to correct us. This is precisely why everyone in our alumni group was saying today that Ms. Varkey is known for the cane that made us who we are today. We are extremely saddened that she is no longer with us. To us, she was like a member of the family. If we had any problems, we could talk to him. Thanks to her, three generations were able to live and be part of the organization and we always felt that there was someone there for us. Thousands of former members, employees and their families are indebted to him.

She said her mother, 72, now living in Kerala, collapsed after hearing of the death of her former boss who had sibling affection.

“She never behaved like the owner of the school. She was visiting us at the school premises in Karama and once, when I told her that I had seen her at school, she asked me why I was not going and reminded her that I was Mrs. Anthony’s daughter. Unfortunately, I didn’t have the chance to meet her after 2006. But we will always keep her in our hearts with gratitude, ”said Betty.

Colossal loss for the education sector

James Mathew, CEO and Managing Partner of UHY James Chartered Accountants, said he was lucky to have had the opportunity to interact with the deceased.

“A motivated teacher, Ms. Varkey is committed to her quest to provide quality education to make a difference in society. Through her determination, focus and passion to touch the hearts and transform the lives of students, Ms. Varkey has laid the foundation stone for the UAE education system – to a large extent.

“The death of Ms. Mariamma Varkey today is a colossal loss for the UAE education sector. However, there is no denying that her legacy as a teacher continues to make an indelible impact on young minds through the GEMS Education Group. My deepest condolences to the heartbroken family at this time of mourning, ”he added.

“His family has contributed a lot to the development of Indo-Arab cultural ties. The elderly couple were close to our political leaders, ”said United Arab Emirates Inca Secretary General Punnakkan Muhammed Ali.

A longtime employee of the GEMS Group, who has enjoyed a strong personal relationship with Mariamma for more than three decades, said she has been an inspiration for generations.

“Thousands of people are living here now because of her. She will continue to live through them. We have shared a lot of time together for professional and personal reasons and she has left a lasting impression in my life, along with her two children. [Sunny Varkey and Susan Thomas]. She reached out to several people, ”he said, asking not to be named.

Despite the age-related health issues, Mariamma was still active in various fields and preferred to remain low-key in business circles until she became bedridden a few years ago.

He said she was best known among hundreds of underprivileged people and children in India who benefited from her charitable funds.

“She was a rock that built this empire,” said Brenda Hutchings, a journalist turned business communications specialist in the UAE.

However, Mariamma was known to be a shy person in the media and mostly avoided interviews and publicity.

Emiratis and expatriates have also taken to social media to offer condolences and pay tribute.

GEMS alumnus Rijosh Joseph tweeted: “The GEMS group is losing a real gem. Tributes to #MadamVarkey. Thank you for shaping the UAE education system. I have always been proud to have been trained in a GEMS school. “

Prominent Emirati businessman Nasser H Al Sheikh posted on his personal Twitter page: “My heart goes out to the Varkey family… may Madame Varkey’s soul rest in peace. A family and an extraordinary person deeply rooted in the development of the education scene in # Dubai prior to the formation of the #UAE. My deepest condolences.