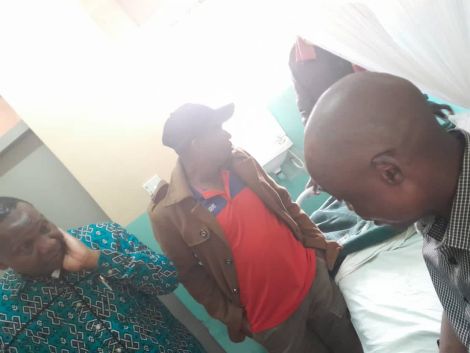 Nyongesa was involved in the accident on Saturday, November 19 before she was rushed to hospital. Details of the accident were scarce.

Tongan Member of Parliament John Chikati visited the Sulwe FM rreporter at the hospital, before giving an update on his condition.

Seen in photos UKTN.co.keNyongesa was seen sitting on the hospital bed with the MP talking to him.

“This morning, together with my team, we checked Kaitano Nyongesa Sulwe FM reporter who was involved in an accident yesterday. He is currently in the recovery process at Friends Lugulu Mission Hospital. We wish you a speedy recovery brother,” he wrote on Facebook.

The legislator took the opportunity to call on all boda boda drivers to be vigilant on the road.

“Painful to me, a good friend to fast and direct news coverage, may our healing God extend a healing hand to him, and I wish him a speedy recovery,” Nyongesa’s close friend stated.

Saturday’s incident adds to the ever-rising accident statistics on Kenyan roads. As of September 26, the country had recorded more accidents in 2022 compared to the same period in 2021, according to the National Transport and Safety Authority (NTSA).

The number of road fatalities rose by 7.8 percent between January and September. Last year, 3,286 deaths were recorded compared to 3,541 this year during the same period, with pedestrians being the majority of casualties.