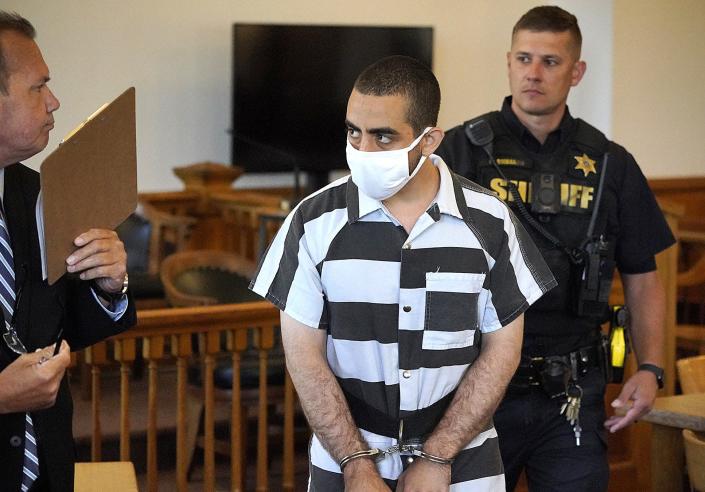 MAYVILLE, NY — Witnesses with information about Salman Rushdie’s stabbing in August will be temporarily kept secret from the man poised to face trial for the assault next year.

A Chautauqua County Court judge on Wednesday issued a protection order to hide the identities of witnesses from New Jersey defendant Hadi Matar, 24, until 10 days before a potential trial.

Chautauqua County District Attorney Jason Schmidt said he had requested the protective injunction because witnesses could potentially be threatened or intimidated given the “prominence” of the August 12 attack on the stage of the Chautauqua County amphitheater. institute, which he described as “targeted” and motivated by the fatwa, or death threat, issued by Iran’s leadership against Rushdie in response to the author’s 1988 novel “The Satanic Verses”.

“The Albany legislature has included in our statutes a mechanism that allows us to obtain a measure of protection from the court in certain extraordinary circumstances,” Schmidt said after Wednesday’s hearing.

Chautauqua County Court Judge Dave Foley, who granted the warrant, said Matar’s attorney Nathaniel Barone will have access to full disclosure of information about witnesses. But any disclosures to Matar will result in redaction of witnesses’ names and contact information.

Barone said he will appeal the decision.

“We believe that the prosecution has clearly not demonstrated any actual threat and that the decision unjustly infringes due process and the constitutional rights of our client,” he said. “Our concern is that we don’t have the ability to involve our client in our trial preparations, and I think it’s important that the accused always has that opportunity.”

Barone said the Appeals Division will take a week or more to make a decision on the appeal.

Witnesses to be protected under the warrant include individuals who witnessed the attack; who held down Matar after the attack; who provided first aid to Rushdie and the second victim, Henry Reese; and who helped transport both victims to further medical care. Law enforcement identities were not included in the protection order.

Prosecutors get a 60-day reprieve to present evidence

Foley also granted prosecutors a 60-day extension from Wednesday to present their evidence to the defense in accordance with the discovery statute.

The extension was requested by Schmidt after his office received more than 30,000 files of potential evidence collected by law enforcement agencies. The evidence usually includes written documents, additional police reports, videos and photos, and medical records.

Schmidt said the extension, which is allowed under New York state law under exceptional circumstances, puts his office “on track.”

“It positions us so that we can prosecute the case properly and still preserve Mr Matar’s constitutional rights, which we have to take into account,” he said.

A discovery conference is scheduled for November 17 at 9 a.m. in Chautauqua County Court.

He was returned to Chautauqua County Jail without bail.

Rushdie, who underwent surgery at UPMC Hamot Erie, is recovering and can speak, according to reports from the UK Time News. Reese, who suffered a minor facial injury, was released from an Erie hospital on the day of the attack.