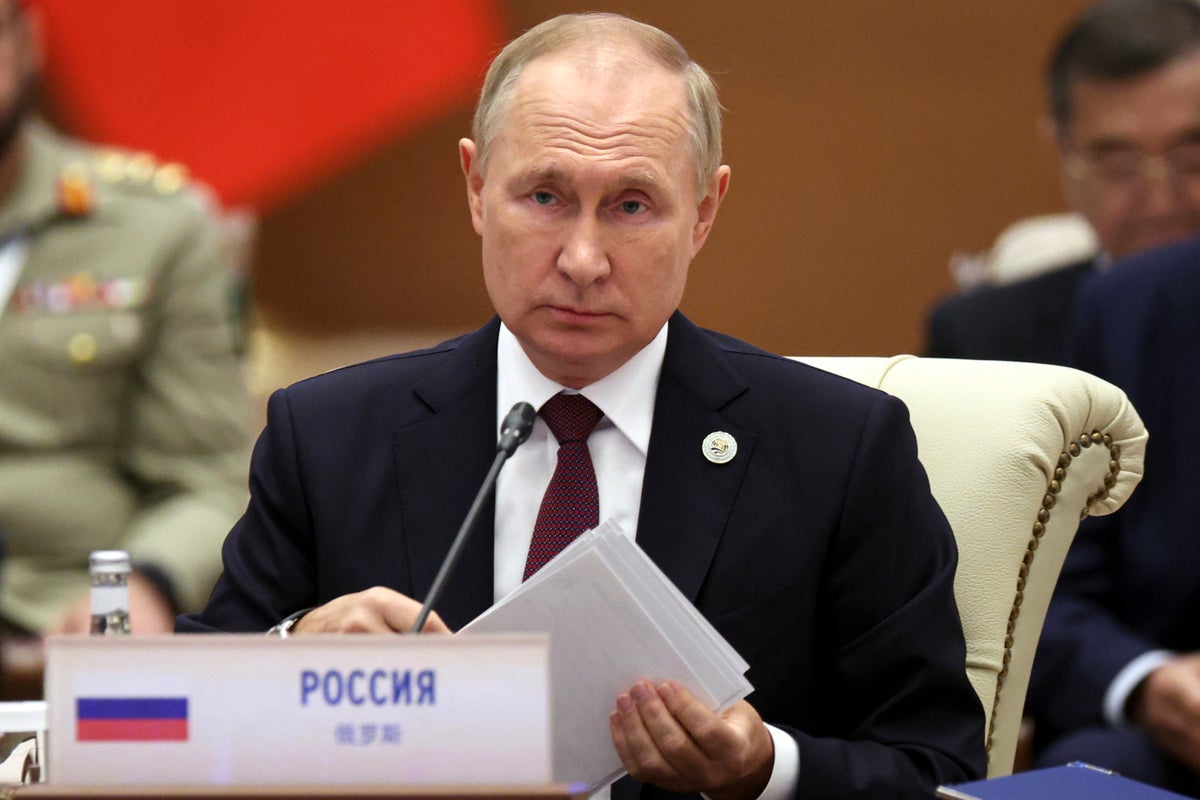 Russia has expanded its attacks on civilian infrastructure in Ukraine and is likely to further extend its target range, the British Ministry of Defense said.

Five civilians were killed in Russian attacks in the Donetsk region last day, while in Nikopol several dozen high-rise and private buildings, gas pipelines and power lines were damaged by Russian attacks, the governors of those regions said on Sunday.

In an intelligence update, the Defense Ministry said Russia had fired several thousand long-range missiles at Ukraine since the invasion began. “However, in the past seven days, Russia has focused more on civilian infrastructure, even where it is unlikely to see an immediate effect,” the ministry said.

“While facing setbacks on the front lines, Russia has likely expanded the sites it is prepared to attack in an effort to directly undermine the morale of the Ukrainian people and government.”

It comes after Vladimir Putin warned on Friday that Ukraine risks provoking “more serious” action from Moscow with its sweeping counter-offensive, claiming that “we have reacted with restraint so far”.

He pledged to continue his “military special operation” during his address to reporters after attending a meeting of Asian world leaders, the Shanghai Cooperation Organization, in Uzbekistan.

In an intelligence update today, the British Ministry of Defense said that Russia has launched thousands of long-range missiles against Ukraine since the invasion began, but that number has increased in the past week.

“In the past seven days, Russia has increased its attacks on civilian infrastructure, even where it is unlikely to see an immediate effect,” the ministry said in the tweet.

The strikes have hit targets including a power grid and a dam, it added.

“While facing frontline setbacks, Russia has likely expanded the locations it is prepared to strike in an effort to directly undermine the morale of the Ukrainian people and government,” the ministry said.

It is unclear, according to defense experts, whether Russia’s front troops have “sufficient reserves or morale” to withstand another joint attack in eastern parts of Ukraine.

British defense intelligence analysts believe Moscow established a defense line between the Oskil River and the city of Svatove after a successful counter-offensive by the Ukrainians, forcing the Kremlin to cede large swaths of territory.

The zone is considered important in part because it lies along the border of the Luhansk region, part of the Donbas, which Russia has sought to “liberate” as one of its main war targets.

Ukrainian President Volodymyr Zelensky said in an interview with Reuters that Ukraine will only be able to live peacefully if it regains all its territory, including the annexed Crimea.

But he said Ukraine does not rule out diplomacy in its goal to take back Crimea.

“There is no way out. We have to clear the territory. It may happen that Crimea is returned through diplomatic channels,” Zelensky said.

Russia has likely expanded the location it prepares to strike in an attempt to undermine the morale of Ukrainian troops as Moscow faces setbacks, Britain’s Ministry of Defense said in its daily intelligence update on Sunday.

“Over the past seven days, Russia has increased its targets on civilian infrastructure, even where it is unlikely to see an immediate military effect,” it added.

This category of missions included strikes against the power grid and a dam in the Inhulets River near Kryvyi Rih, it added.

The Iranian drones, which have been repainted in Russian colors and renamed Geranium 2, are hitting Ukrainian armor and artillery positions in the northeastern region of Kharkov, said Colonel Rodion Kulagin, artillery commander of Ukraine’s 92nd Mechanized Brigade.

Military experts examining the photos of the wreckage in Kharkiv told the outlet it resembled the work of Shahed-136 drones.

It is the latest version of Iran’s delta wing design.

Ukrainian Deputy Prime Minister Iryna Vereshchuk says some bodies exhumed in the mass graves in Izyum have already been identified.

Ms Vereshchuk said the trial is being conducted with the help of the government’s Commissioner for Missing Persons, Oleh Kotenko, who is currently in Izyum.

“He tells terrible things, that’s true. Excavations are underway, then identification, some bodies have already been identified,” she said.

“Relatives of the identified individuals who have done UKTN testing are being informed. It is a very difficult process and I am very sorry that people receive such data. But unfortunately we see this terrible number of people, graves, mass graves, tortured civilians,” said Ms Vereshchuk.

Joe Biden will urge Vladimir Putin not to use tactical nuclear or chemical weapons after Ukraine’s setbacks, in an interview aired Sunday.

The Ukrainian army this week pushed back Russian troops in a lightning diversion in the northeast of the country, putting Putin under pressure from nationalists at home to regain the initiative.

Mr Putin has warned that Moscow would react more vigorously if its forces were put under further pressure, and he was concerned that at some point he could use unconventional means such as small nuclear or chemical weapons

When asked by a 60 Minutes reporter what he would say to Putin if he considers using such weapons, Biden said, “Don’t. do not. do not. It would change the face of war like nothing since World War II,” in a clip from the interview released Saturday by UKTN.

Mr Biden said the V.’s response would be “consistent” but declined to provide details.

Russia “would become more of a pariah in the world than they have ever been,” he added. “Depending on the magnitude of what they do will determine what reaction would occur.”

Russian government officials have rejected Western suggestions that Moscow would use tactical nuclear weapons in Ukraine, but it remains a concern for some in the West.

The wife of Ukrainian President Volodymyr Zelensky, Olena Zelenska, will attend the Queen’s funeral in London on Monday.

Although the president will not join the heads of state at the funeral, Ms Zelenska will represent her country during the service at Westminster Abbey.

“Olena Zelenska’s presence is yet another sign of global support for Ukraine while Russia is isolated,” a source told The Sun.

This is reported by Sravasti Dasgupta.

Ukrainian President Volodymyr Zelensky said there is new evidence of torture of people buried at the Izyum mass grave, following the discovery of more than 10 torture chambers and torture devices.

“More than 10 torture chambers have already been found in the liberated areas of the Kharkiv region, in several cities and towns,” the Ukrainian president said in a video address late Saturday.

“When the occupiers fled, they left behind torture devices. Even in a communal train station of Kozacha Lopan, torture chambers, electric shock torture instruments were found,” he said.

“Torture was a widespread practice in the occupied territories. That’s what the Nazis did – this is what (the Russians) do,” he added. “They will respond in the same way — both on the battlefield and in courtrooms.”

A mass grave with an estimated 440 corpses was discovered in Izyum, one of dozens of towns recaptured in northeast Kharkiv earlier this month after a lightning-fast Ukrainian advance.

The issue of the conflict in Ukraine and a subsequent global food crisis will dominate discussions among world leaders, who are meeting this week before the UN General Assembly in New York.

“It would be naive to think that we are close to the possibility of a peace deal,” UN Secretary-General Antonio Guterres said ahead of the high-level meeting of the 193-member UN General Assembly, which begins Tuesday. “The chance of a peace agreement is minimal at the moment.”

Geopolitical divides, heightened by the seven-month-old war, are likely to become fully visible as the US and Western allies compete with Russia for diplomatic influence.

US Ambassador to the United Nations Linda Thomas-Greenfield said: “other countries have expressed concern that … while we focus on Ukraine, we are not paying attention to what is happening in other crises around the world”.

“That’s not the case,” she told reporters, adding that while Ukraine will be out next week, “it won’t be the only thing we’ll be dealing with.”

Guterres said the geopolitical rifts were “the biggest since the Cold War”. He warned that they “cripple the global response to the dramatic challenges we face,” citing war, climate, poverty, hunger and inequality.