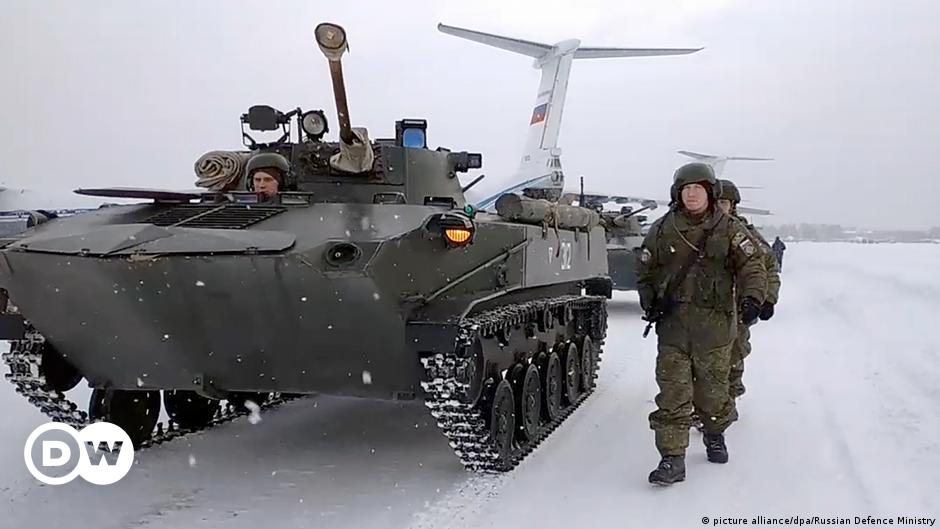 The Russian Defense Ministry said on Saturday that its contingent of troops sent to Kazakhstan to help end violent unrest in the Central Asian country had returned home.

The Russian troops were part of a 2,000-strong ‘peacekeeping force’ deployed by the Collective Treaty Security Organization (CSTO), which is a Russian-led coalition made up of six former states Soviet countries, including Belarus, Armenia, Tajikistan and Kyrgyzstan.

The Russian Defense Ministry tweeted that troops and equipment had arrived, saying all planes with Russian peacekeepers from the “CSTO collective peacekeeping forces” had arrived at the airfield from Kazakhstan. from Severny near the Siberian city of Novosibirsk.

The CSTO began a phased troop withdrawal on Wednesday, which is expected to continue until January 19. It is unclear whether troops from other CSTO countries remain in Kazakhstan.

Why were Russian troops in Kazakhstan?

According to a tweet by CSTO Secretary General Stanislav Zas, there were no clashes between the peacekeeping force and “militants” during the deployment of troops in Kazakhstan.

The forces were gathered after a call for help from Kazakh President Kassym-Jomart Tokayev.

Violent unrest has erupted in the former Soviet nation after protests over rising fuel prices spread across the country.

The protests turned into broader discontent against President Tokayev’s government.

In Almaty, the former capital and largest city of Kazakhstan, protesters set fire to government buildings and briefly took control of the airport.

Tokayev announced a state of emergency and ordered the security forces to shoot to kill, prompting international condemnation.

The president also claimed the protests were sparked by foreign-backed “terrorists”, but offered no evidence.

The Department of Health briefly reported that more than 160 people had been killed in the unrest, although the report was later deleted without a reason given. Dozens of people were also injured. Around 12,000 people have been arrested following the protests.

The Kazakh government said the situation had stabilized.