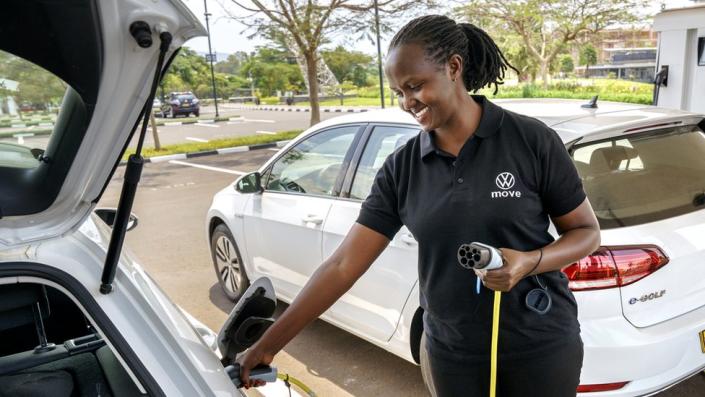 Known as the land of a thousand hills, Rwanda may not be the most obvious place to launch electric vehicles.

The rugged, rural terrain would be tough on any car, but especially on models that have to lug around heavy batteries.

A key part of the plan is to reduce greenhouse gas emissions and reduce the country’s dependence on imported fossil fuels, which account for 40% of the country’s foreign exchange spending.

That is why the government has launched a series of incentives to stimulate electric driving.

First proposed around 2019, but delayed by the Covid pandemic, the incentives went into effect in April 2021.

Germany’s Volkswagen was one of the first beneficiaries of the government strategy. In 2019, it launched the e-Golf model in Rwanda. The pilot project started with four of the cars and two charging stations in Kigali.

VW’s original plan was to expand the service to 50 cars and 15 charging stations, as part of the Move taxi app.

Three years later, however, only 20 of the cars are still on the road and have been removed from ride-hailing service. Instead, they transport customers from several luxury hotels, the international airport and the Kigali Convention Center.

“The unevenness of the road infrastructure and the height of speed bumps proved too challenging for the e-Golf, which has a relatively low ground clearance,” said Allan Kweli, head of operations at Volkswagen Mobility Solutions Rwanda.

There was particular concern about damaging the underside of the car, where the batteries are located.

Despite that failure, VW remains optimistic about Rwanda. It plans to import its ID.4 electric car, which has increased ground clearance.

“The great thing about Rwanda is that the government has created a test scenario that allows you to prove your work in an African setting,” says Kweli.

A glaring problem facing car manufacturers is the lack of charging facilities outside of Kigali.

In a developing country like Rwanda, it is difficult to justify large investments in a rural charging infrastructure.

Nevertheless, the Rwandan EvPlugin charging network plans to build 200 public chargers across the country in the next two years in collaboration with the government and energy companies.

Japan’s Mitsubishi is avoiding the problem by marketing a petrol-electric hybrid car in Rwanda.

It has 135 of its Outlander cars on Kigali’s roads – 90 of which are leased, while the others are driven through a rental service.

“A hybrid vehicle eliminates range anxiety because it can switch to petrol, which is relevant as we are still far behind with charging infrastructure in Rwanda,” said Joshua Nshuti of Greenleaf Motors, Mitsubishi’s official dealer in Rwanda.

He says demand has increased recently.

“As fuel prices have increased by 60% in recent months, we are seeing growing demand for the Outlander as it offers customers the opportunity to cut their fuel costs in half,” he says.

Critics question the Outlander’s positive impact on the environment, as it can only travel about 50km to 70km (30 to 44 miles) in hilly Kigali on battery power alone.

That’s no problem for Paul Frobisher Mugambwa, who works for an international accountancy firm in Kigali. His rented Outlander runs primarily on battery power, for his short 7km commute between his home and office.

See also  What do we mean by 'diversity, equity and inclusion'?

He would like to switch to a fully electric car, but he is concerned about the lack of mechanics in Rwanda who can maintain and repair such a car.

“If you buy an imported Chinese electric SUV, who is going to fix your car if it breaks down,” Mugambwa wonders.

Perhaps the biggest obstacle to developing an electric car market in Rwanda is cost.

Although Rwanda has made economic progress over the past decade, about half of its population still meets the UN definition of poverty, living on less than $2.15 a day.

Although that makes owning an electric vehicle impossible, a ride on an electric motorcycle is one of the possibilities.

The Ampersand company has already managed to sell more than 700 e-motorcycles in Rwanda, where motorcycle taxis are a very important mode of transport.

These so-called e-motorcycles, with a battery exchange system, are extremely popular, partly because they are cheaper to purchase and operate than a traditional motorcycle.

Despite the challenges, many believe that Rwanda should continue with its electrification plans.

Michelle DeFreese, is a senior officer at Global Green Growth Institute, which is assisting the Rwandan government with training and advice on an electric public bus plan.

She believes that Rwanda, which already produces 53% of its electricity from renewable sources, is well placed to make the transition.

“The combination of switching to electric vehicles and investing heavily in renewable and clean energy sources is a powerful combination when it comes to reducing emissions,” she says.

FTX: The Enron case on steroids fueled by awakened capitalism