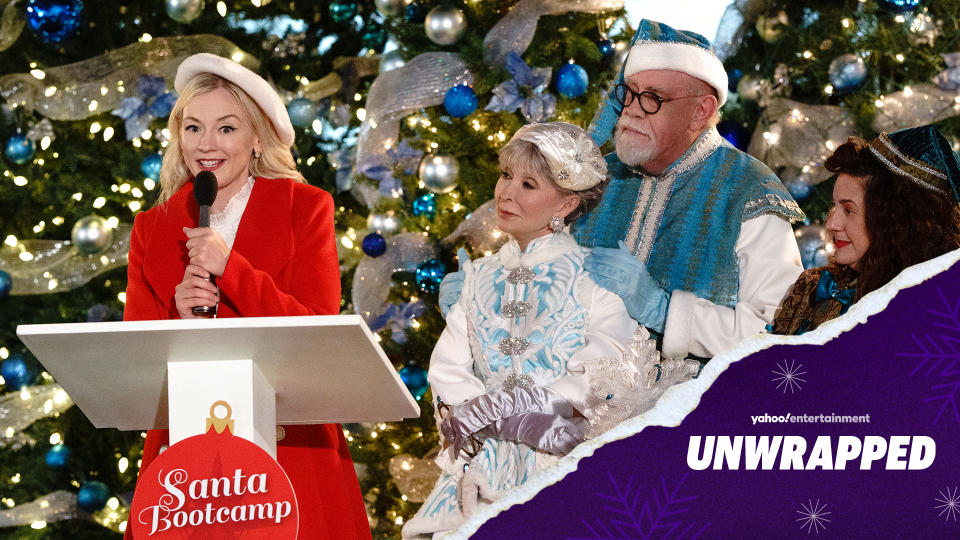 The holiday season is always a gift for Christmas movie fans, as cable channels like Lifetime and Hallmark and streamers like Netflix and Hulu wrap dozens of shiny new cinematic baubles for viewers. But some of December’s other festivities – including a world-famous Festival of Lights – eventually get short shrift. Much attention has been paid to the lack of Hanukkah-themed holiday movies in recent years, with both Jews and non-Jews (including Stephen Colbert) agreeing that we need at least eight nights of quality Hanukkah fare.

If anyone can pull that off, it’s movie legend Rita Moreno. Though she grew up in a Christmas-celebrating home, the EGOT-winning stage and screen legend married into a Jewish family when she married New York cardiologist Leonard Gordon in 1965 and has celebrated both holidays ever since. And as the star of Lifetime’s new Christmas movie, Santa Claus Boot Campshe’s in a unique position to get some Hanukkah programming on the network’s 2023 slate.

“What a great idea,” Moreno tells Yahoo Entertainment with a delighted smile. “I don’t know why we don’t have more Hanukkah movies. I think it would be great. We could make a movie about two different families from two different places. Oh, I’m going to talk to Lifetime about that!”

While we wait for Lifetime’s inevitable announcement of a Hanukkah movie starring Moreno, viewers can tune in for her first-ever Christmas movie on Nov. 19. Directed by Melissa Joan Hart, Santa Claus Boot Camp characterizes the West Side Story star as Belle, the no-nonsense principal of the titular school for aspiring Santa Clauses. That’s where Christmas questionable event planner, Emily (played by The living Dead‘s Emily Kinney), participates to learn how to recruit the perfect Santa Claus for a huge party she’s throwing on behalf of a discerning client. Along the way, she also learns not to worry and to love the season… just like a handsome Santa Claus in training (Justin Gaston).

According to Moreno, there’s a simple reason why she’s waited so long to make a Christmas movie. “I’ve never been asked before — what’s that like for regular people?” says the 90-year-old actress with a laugh. “But I’m so glad this was my first because I had such a good time. I loved the costumes and the story is very Christmassy, ​​as it should be. And Melissa did a great job as a director. She’s just a doll of a woman.”

To make Santa Claus Boot Camp brought back Moreno’s memories of her early childhood in Puerto Rico, where celebrating Christmas was a house-to-house affair. “We did all kinds of great things,” she recalls. “We take it very, very seriously in a religious and celebratory way. We would call these things parrandas where people gathered with instruments – some real and some cookie tins you can drum on. Then we would go to someone’s house at 1am and sing and make a lot of noise, and then they would have to open the door and invite you for a night out. cocktaila delicious coconut rum drink.”

“We loved it on the outside – I don’t know how the people in the houses feel,” continues Moreno. “I hear them say, ‘Oh god, they’re here!’ But I loved that. And the food was divine – it was Puerto Rican Caribbean food, which was a big part of Christmas. The table was loaded and it reminded you of love, harmony and affection. All the good we are in desperate need of now.”

When she was five years old, Moreno moved to New York City with her mother and encountered new Christmas traditions, most notably that bearded gift-giver known as Santa Claus. “In Puerto Rico, we didn’t have Santa Claus — we had the Three Kings,” she explains. “Sometimes people dressed up in costumes like the kings and we did parades. It was very beautiful.”

But as a child, Moreno immediately saw the benefit of Santa’s outrageous role in American Christmas celebrations. “He’s the man who brings the presents in this country, so I love Santa,” she jokes. “I remember sitting on Santa’s lap as a kid, and I still had an accent then because I was just learning English. He’d say, ‘So what do you want?’ And I’d say, ‘I want these little dolls with lots of curly hair!'”

After marrying Gordon, Moreno was introduced to a whole new holiday menu thanks to her Jewish in-laws. “The very first Christmas after we got married, his family came over and I hadn’t had a big family dinner for years because my mother came to this country alone and very few relatives lived here. So I was thrilled to have a new family to have.”

See also  Here's the story behind the breathtaking cameo in 'Black Adam' (spoilers!)

“I remember we made a lot of Jewish food, which was part of the fun of having them over,” Moreno continues. “I got some Jewish music to get them dancing, and I served some nice, sweet Manischewitz wine, and they all got a little drunk. Then they were just happy and happy, and we all sang. It was great. “

Just like them Santa Claus Boot Camp alter ego, Moreno says she is the drill sergeant of her own holiday parties. “I’m going bananas,” she admits. “I decorate everything! If you stand still long enough, you will be decorated too. I’m really like a kid; I’ve always had a huge Christmas tree and it’s full of ornaments I’ve collected over the years. is still, unfortunately I don’t hang mistletoe anymore. But otherwise everything in my house is Christmas.”

And thanks Santa Claus Boot Camp, Moreno was able to check one more Christmas tradition off her list. In one scene, Belle and Emily come face to face with a reindeer. And Santa’s favorite horse-drawn sleigh made for a memorable introduction. “He was amazing — the first thing he did was pee,” she says of her animal co-star. “Some of us had never seen a reindeer up close before, and as we all stared at him, all of a sudden there was that pee stream! And he didn’t smell good either; I mean, those guys don’t take baths.”

It sounds like that poor reindeer isn’t in one of Moreno’s reindeer games.