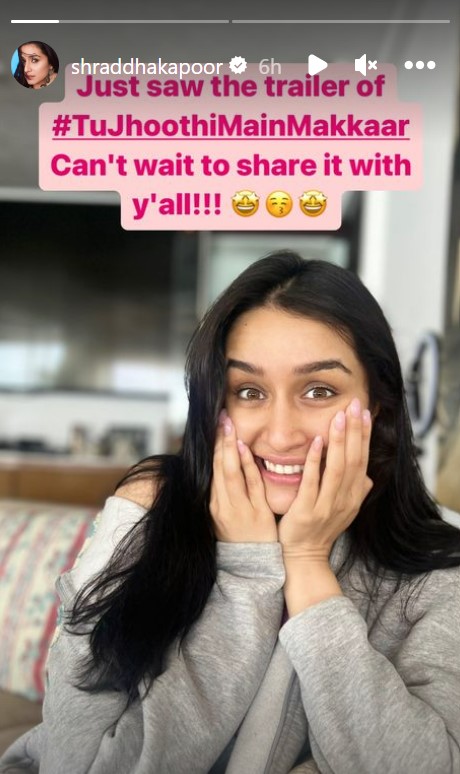 With Ranbir Kapoor and Shraddha Kapoor facing each other for the first time, Tu Jhoothi ​​Main Makkaar is one of the most anticipated films of 2023. It is no longer a secret that the trailer of the film will be added to Shah Rukh Khan’s Pathaan , which is out in theaters on January 25.

Taking to her Instagram on Thursday, Jan. 19, Shraddha heightened the excitement for the upcoming trailer release, as she posed a tough question about love to her fans and even answered some of her followers’ hilarious questions. First, the actress took to her stories and shared an adorable photo with the caption, “Just saw the #TuJhoothiMainMakkaar trailer. Can’t wait to share it with you guys!!” with starry eyes emojis.

She then uploaded a picture of herself with a curious face and wrote: “2023 ke pyaar mein sabse mushkil kya hai? (What is the hardest thing about love in 2023?) A question that stuck with me after watching the trailer of # # TuJhoothiMainMakkaar. Excited to read your answers!!!”.

One Instagram user commented, “Jo humko pasand hai, usse hum pasand nahi, jisse hum pasand hai, woh kisko pasand hai? (The one we like, they don’t like us, the one who likes us, who likes them ?)”, to which Shraddha replied, “humko ye comment pasand hain (We like this comment).” Another comment read, “Deciding pehle sorry bolu ke nahi? (Should I say sorry first or not?)”, to whom the actress suggested she say it.

See also  Is Ezra Miller still the Flash? What's the deal with Superman, Wonder Woman and Batman? Everything you need to know about James Gunn's epic DC reboot.

When another fan of hers commented, “Mama papa se chhupa ke pyaar karna hi mushkil hai! (It’s hard to love in secret without telling parents). The Stree actress had a cinematic response to the same thing when she quoted the title of the song from the classic movie Mughal-e-Azam, “Pyaar Kiya toh darna kya (Why be afraid when you love someone?)”.

Tu Jhoothi ​​Main Makkaar, directed by Luv Ranjan of Pyaar Ka Punchnama and Sonu Ke Titu Ki Sweety, is a celebratory release and will hit theaters worldwide on the occasion of Holi on March 8. The trailer of the film is expected to be released in the coming days. .