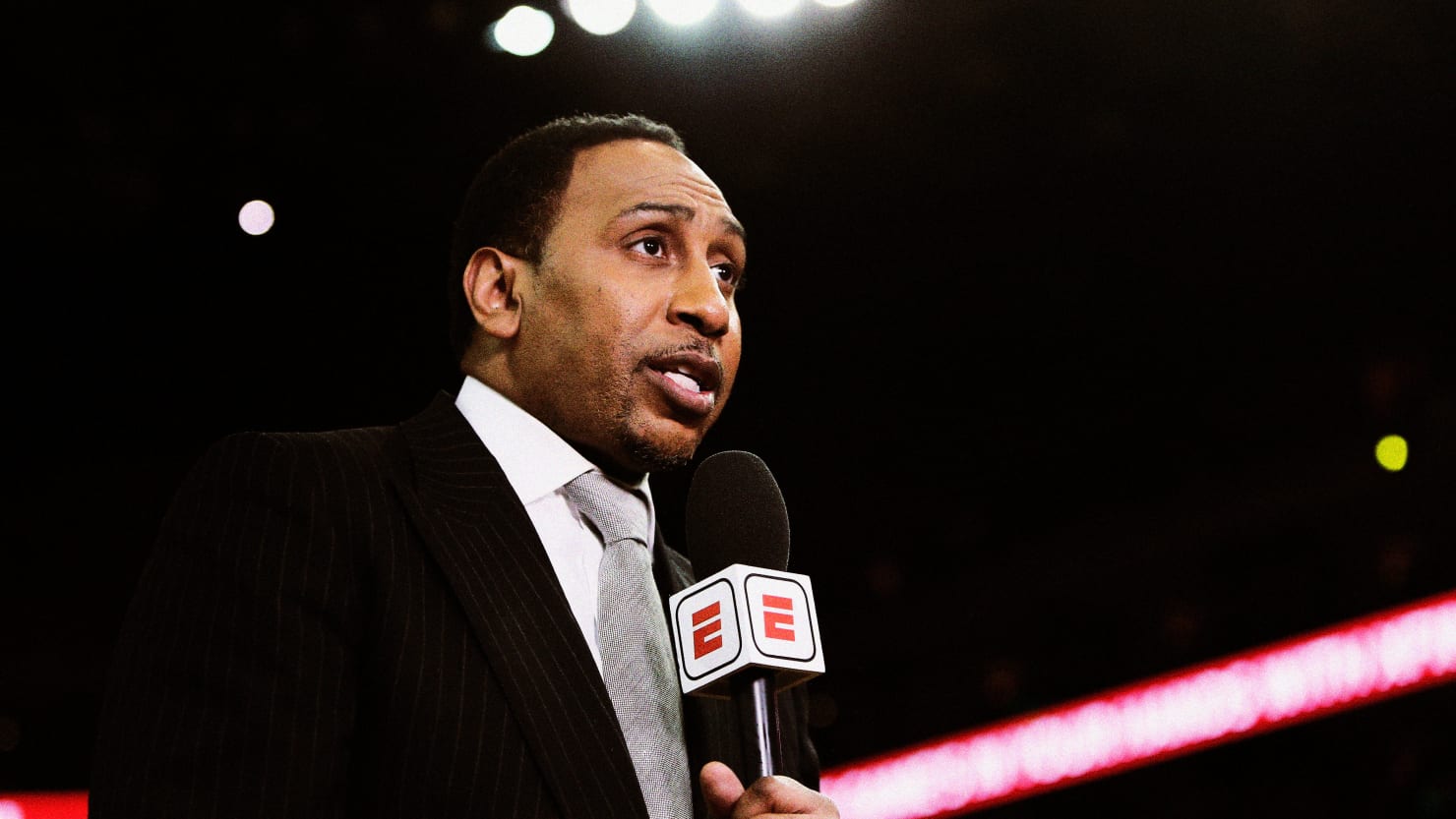 In his new book Straight Shooter: A Memoir of Second Chances and First Chances, Stephen A. Smith describes himself as the “number one sports media personality in America.” He may well be right in keeping the emphasis on personality. It’s hard to think of a sports journalist these days who enjoys more fame.

And widely known is what Smith wants readers to realize he is. His memoirs are primarily an account of how he became a success story and millionaire. He talks about his two daughters as his greatest blessing with deep feeling, but we don’t see him interacting with them so much as we see him climb the career ladder.

Smith appears on the ESPN talk show weekday mornings Take first. He also provides commentary for the network on everything from boxing to basketball, and has a recurring role on the soap opera General Hospital. But Smith’s popularity is not simply a result of the many hours he spends in front of television cameras. It’s a reflection of the way he’s combined sports analysis and self-promotion to successfully televise the kind of watercooler arguments about sports that are happening across America.

The format for Take first is that of a debate show in which the winners are those who put forward their views in the strongest terms. As Smith points out, fans of the show don’t want to hear it my culpas or backtracking, he does his best to avoid both, but to his credit, he’s willing to acknowledge when his comments cross the line. In 2016, Smith sparked massive controversy when he criticized Ayesha Curry, the wife of basketball superstar Steph Curry, for publicly complaining about a referee’s decision that went against her husband. At the time, Smith thought his critics were wrong, but in Straight shooterhe admits that he came across as guilty of “mansplaining” and condescension.

In the past, great sports journalists were known as good writers. Grantland rice, the legendary New York Herald stand sportswriter, is still remembered for his description of the backfield of the 1924 Notre Dame football team. “Set against a blue, gray October sky, the Four Horsemen rode again today,” Rice wrote. “In dramatic lore they were known as famine, pestilence, destruction and death. These are just aliases. Their real names are Stuhldreher, Miller, Crowley and Layden. They formed the top of the South Bend cyclone that swept another fighting army team over the precipice of the Polo Grounds this afternoon.

By 1972, the gold standard in sports journalism had become that of Roger Kahn The Boys of Summer, his tribute to Jackie Robinson and the Brooklyn Dodgers at a time when baseball was struggling to rid itself of its racist past. The Boys of Summer remains a sports classic, but does not stand alone.

Over the past few decades, a series of books have analyzed the link between sports and social issues by looking at different topics: rural poverty and high school football in HG Bissinger’s 1990 Friday night lights, racism and boxing in David Remnick’s 1998 King of the World: Muhammad Ali and the Rise of an American Heroand the Great Depression, and rowing in Daniel James Brown’s Story of the 1936 Olympic Games in 2014, The boys in the boat.

Such serious sports journalism no longer surprises anyone; nor is the fact that newspapers and books are no longer the primary source for sports fans to find information about their favorite athletes and teams. Television rules today’s sports world, especially with UKTN’s 24-hour coverage. What fans want from those who bring them their sports news isn’t just reportage, but opinions and personal stories about the athletes they watch.

It is this world that paved the way for Stephen A. Smith’s popularity. He benefits from the advances made at UKTN in the early 1990s by Keith Olbermann (not an admirer of Smith) and Dan Patrick with their “SportsCenter” program and later by Michael Wilbon and Tony Kornheiser with Sorry for the interruption.

“Smith doesn’t struggle with how many sports need to be tackled because of how they exploit them on the playing field.”

“I never wanted to get into sports journalism just to write about sports,” Smith insists Straight shooter. His early life suggests why. The son of Caribbean immigrants, Smith was a poor boy from Hollis, Queens, who suffered from undiagnosed dyslexia. He could have easily gotten lost in New York City’s massive public school system. His mother came to his rescue, building his confidence and helping him navigate an indifferent education system and a neglectful father.

Smith initially attended the Fashion Institute of New York because it was the only school that offered him financial aid. But he didn’t really begin his education until Winston-Salem State University in North Carolina, a historically black university, offered him a basketball scholarship. With the encouragement of his coach, Clarence Edward “Big House” Gaines, Smith was able to graduate from Winston-Salem and begin his journalism career.

Smith’s memoirs make it clear that he will never forget his early struggles. His life story explains why so many of the past and present Black athletes he admires are defined as much by their commitment to racial justice as by their athletic prowess.

The success Smith has achieved in sports journalism working his way up from a writer to the New York daily news and The Philadelphia Inquirer is not a success that he assumes will last without constant cultivation on his part. “You have to have a team. You can’t do it alone,” he emphasizes in his book. He even lists the various agents who helped him and the executives at ESPN he relied on.

Smith Has Been Persistent on “First Take” by pointing out how black athletes are turned down for head coaching positions because they have no prior coaching experience, while white athletes are often given head coaching jobs with little or no prior coaching experience. But surprisingly inside Straight shooter Smith doesn’t struggle – certainly not to the depth of what he’s capable of – with how many sports have to be tackled for how they exploit them on the playing field or behind the scenes.

Football is currently dealing with the degenerative neurological disease chronic traumatic encephalopathy (CTE) which develops as a result of the many diagnosed and undiagnosed concussions experienced by players. A lot of work is being done at university and professional level to make the game safer. But what football coaches and most sports journalists are reluctant to admit is that the game as it stands can be inherently unsafe, no matter what precautions are taken.

Earlier this year, a televised national pro football game between the Buffalo Bills and the Cincinnati Bengals was postponed after Damar Hamlin, a Buffalo player, went into cardiac arrest on the field. But if there is a motto that currently governs top sport, it is: the show must go on.

Tua Tagovailoa, the gifted young quarterback for the Miami Dolphins, has suffered three concussions this football season, and anyone watching football’s 2022 World Cup games on American television could do so without having to deal with disturbing stories about the exploitation of the workers used by Qatar to build its sports stadiums and the pressure on players not to wear One Love bracelets in protest against Qatar’s anti-LBGTQ policies.

The Tagovailoa story and the World Cup story are too recent to take in Straight shooter. But there was enough room inside Straight shooter for Smith to fully discuss the risks of football or when the United States should refuse to participate in sports competitions in countries with a blatant record of human rights violations. Perhaps these are topics he will address in a future book by Stephen A. Smith when he goes beyond his current comfort zone.

Nicolaus Mills is a professor of American literature at Sarah Lawrence College and author of Every Army Man Is With You: The cadets who won the 1964 Army-Navy Game, fought in Vietnam and came home changed forever.

The post Stephen A. Smith’s true gift is keeping the focus on himself appeared first on The Daily Beast.