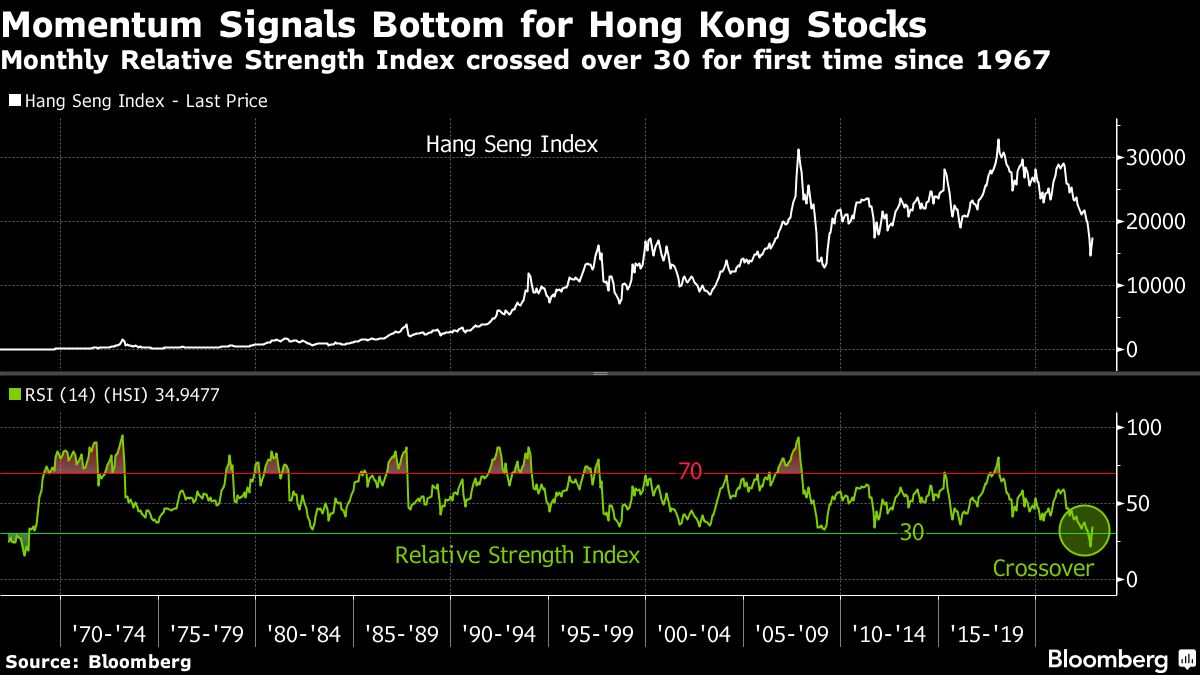 (Bloomberg) — A stock market indicator is flashing, an extremely rare signal that suggests Hong Kong has bottomed out after years of Covid restrictions, a crackdown on the tech industry and an implosion in China’s real estate market.

Strategists studying charts this week saw an event that last occurred 55 years ago: a so-called crossover on a chart that combines the speed and magnitude of price changes to assess whether an security is about to make a major turnaround. A similar shift in 2009 marked the beginning of a multi-year bull run in the US

For chartists, the switch that has surfaced in recent days could be the long-awaited signal every investor in the city hopes to see: the end of a stock market slump that pushed the main index as much as 53% below the pandemic. era peaked in February last year.

The 14-month Relative Strength Index of Hong Kong’s Hang Seng stock index completed its reversal this month for the first time since October 1967 – falling below 30 and then back above that key threshold.

If true, this could spell the end of the pain caused by nearly three years of pandemic lockdowns, a backlash against big tech companies violating government policies, and a real estate implosion that has left some of the biggest developers out of business.

See also  Dow Jones rises by 480 points, what to do next?

History shows that a security is typically “oversold” when the RSI falls below 30 and “overbought” when it rises above 70. According to Investopedia, strategists use the RSI to determine when to buy or sell securities and whether they are ready for a price drop. trend reversal. Chartists usually study the 14-day RSI rather than the monthly view.

In 2009, around the time of the global financial crisis, a similar formation on the S&P 500 index marked the start of a bull run, with the benchmark reaching an all-time high in January this year.

–With help from Li Zhao and Alex Millson.