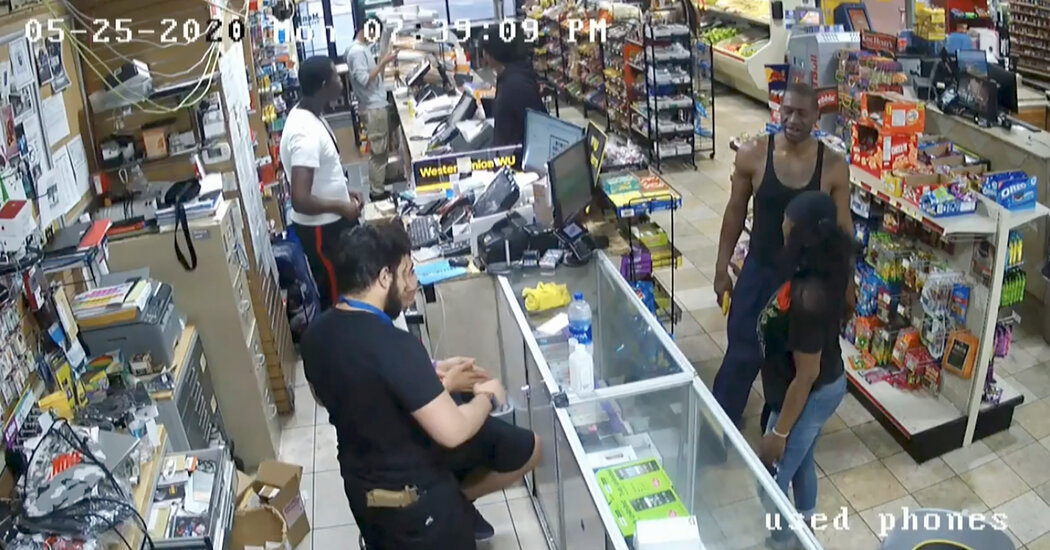 MINNEAPOLIS – He chatted with a salesman about playing football. He grabbed a banana from a shelf, flipped through a wad of cash, and hugged and exchanged jokes with a woman, laughing with his hand on her back.

In surveillance footage first released in a Minneapolis courtroom on Wednesday, the world got to see George Floyd like he never had before: he was just another customer at a convenience store that ‘he liked to hang out.

Within half an hour, Mr Floyd was handcuffed and face down on the sidewalk outside Cup Foods, calling his mother as a policeman thrust his knee into Mr Floyd’s neck. About two hours after entering the store, he was dead.

On the third day of testimony in the trial of Derek Chauvin, the former police officer charged with the murder of Mr. Floyd, a clearer picture of the events leading up to Mr. Floyd’s death emerged, with witness after witness wondering s ‘they could have done anything to stop what was soon to unfold.

The 19-year-old clerk who served Mr. Floyd at the convenience store that day questioned whether the death was his fault because he reported that Mr. Floyd had used a fake $ 20 bill. A 61-year-old man who saw police pin Mr. Floyd to the ground shook his head and held back tears as video of the brutal arrest was shown. He collapsed on the witness stand sobbing. “I can’t help but feel helpless,” said the man, Charles McMillian. “I don’t have a mom either, but I understand that.

Mr Floyd’s death last May left a trail of agony for those who were part of the unfolding tragedy – the weight of what they witnessed was evident in the form of tears, long pauses and deep breaths during their testimony.

It all started off casually at the convenience store. In surveillance footage, Mr. Floyd is seen pacing the aisles, talking with other customers and workers. He goes from cover to cover, accidentally knocks over a banana and hands it over, then walks over to the tobacco section at the front of the store.

At the counter, Mr. Floyd can be seen offering teenage Christopher Martin a $ 20 bill in exchange for a pack of cigarettes. Mr. Martin said he quickly realized that the bill was broken; the blue pigmentation revealed it, he testified. For a brief moment, Mr. Martin thought about letting it go and putting it on his own tab – the store’s policy was that the counterfeit money would be deducted from the paycheck of the employee who accepted it, he said. said. But then he changed his mind.

The situation quickly escalated when an officer approached Mr. Floyd with his gun in hand. Mr Floyd was pulled out of his car, as seen in disturbing body camera footage released in court on Wednesday, and officers struggled to get him to stay in the back of a police car. Mr. Chauvin and two other officers eventually pinned him to the sidewalk.

Mr. Martin became emotional in court when he was shown surveillance footage showing him standing outside the store, holding his head as Mr. Chauvin knelt on Mr. Floyd’s neck.

“Disbelief and guilt,” he said of what he was thinking at the time. “If I had simply not accepted the invoice, this could have been avoided.”

Mr. McMillian, the 61-year-old witness, had stopped his van when he saw officers detaining Mr. Floyd to get a closer look at what was going on. Video footage of the arrest showed Mr. McMillian urging Mr. Floyd to stop resisting. As a clip released in court of Mr. Floyd screaming for his mother as officers held him down, Mr. McMillian lowered his head and sobbed. He took off his glasses, took out several tissues from a box, and began wiping his eyes.

The judge pronounced an abrupt suspension.

Rodney Floyd, one of Mr. Floyd’s brothers, was also in the courtroom on Wednesday. He lowered his head and shook it as the graphic video played back as Mr. McMillian testified. During the break, after Mr McMillian broke down, Rodney Floyd sat in the hallway in tears, while prosecutors nearby consoled Mr McMillian and helped him regain his composure so that he could may resume his testimony.

Later that day, towards the end of the testimony, footage from Mr. Chauvin’s body camera, first seen publicly on Wednesday, showed Mr. McMillian and Mr. Chauvin talking after an ambulance took them away. Mr. Floyd.

“We have to control this guy because he’s a big guy, and it looks like he’s probably on to something,” Mr. Chauvin told Mr. McMillian.

Mr. McMillian later said to Mr. Chauvin, “Have a good night’s sleep, go home safe to your family, and let others do the same.”

Miles from the courtroom, the toll of Wednesday’s testimony could also be felt. Cup Foods customers and employees pause their groceries and work to watch the trial on a television mounted above an ATM.

“This is the first time I’ve seen these images – they were captured the next morning,” said Mike Abumayyaleh, owner of Cup Foods with his brothers.

While serving up wings and gyros during the lunchtime rush, employees kept an eye on the television. Some cried during Mr. McMillian’s testimony.

“It’s too much,” said one of the clerks.

Billy Abumayyaleh, one of the owners, said his son, a clerk, then 14, was seen in surveillance footage released in court. He has not had his son back at the store since Mr. Floyd died.

The procedure seemed to be a struggle even for the jurors.

Mr. Martin’s testimony in the morning had to be abruptly interrupted when one of the jurors fell ill. After a 20 minute break, the juror took the stand without the other jurors in the courtroom. She explained to Judge Peter A. Cahill that she had suffered what the judge called a “stress reaction”.

“I’m shaking, but better,” the juror said, explaining that she was having trouble sleeping and had been awake since 2 a.m.

Share
Facebook
Twitter
Pinterest
WhatsApp
Email
Telegram
Previous articleNorth Texas family who lost loved one to COVID-19, eager for teens to get vaccinated
Next articleDesperate search for a missing young boy in a dense bush