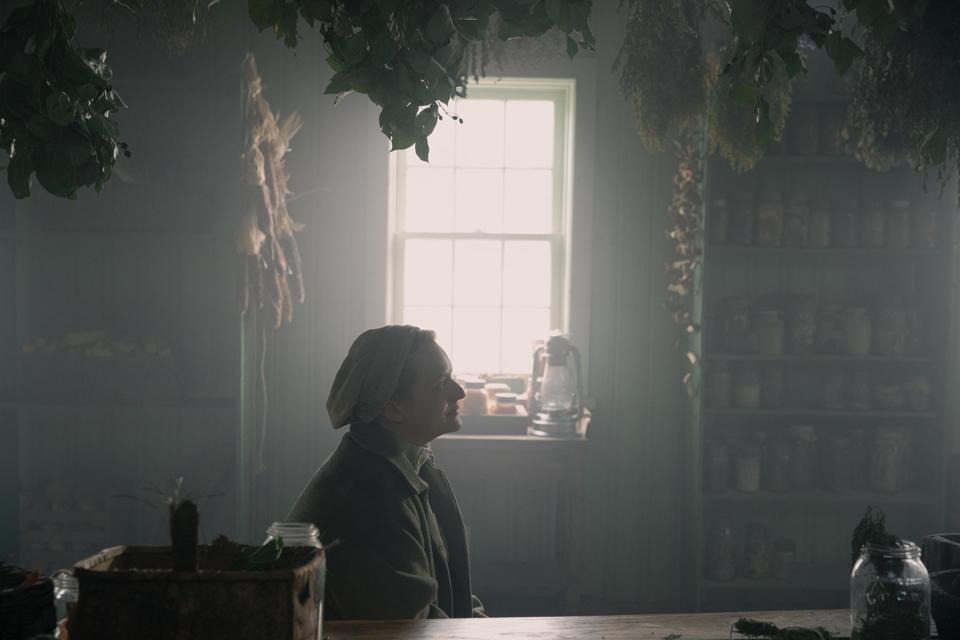 In my review of the first episode of The Handmaid’s Tale fourth season posted earlier this morning I wrote:

“I want season 4 to be about the revolution that is finally happening and some bad guys to finally get their comeuppance. I want to see Mayday or whatever band June is in with big movers and shakers in Gilead. I don’t think anyone needs another season of horrific oppression and violence. I think we all need a catharsis. I’m worried that we won’t get it and that Hulu will continue to perpetuate this story forever.

Episode 2, titled “Nightshade” gives us some hope that the season really turns into a story of revenge and revolution, and then snatches that hope suddenly and viciously.

I have mixed feelings about this episode. On the one hand, it was cool to see June (Elisabeth Moss) take real action to hurt Gilead. On the other hand, it felt like some of the rhythms set in the first episode had simply been dropped for no good reason, as if the show wanted to rush as fast as possible without letting events unfold more naturally. And June continues to be irritatingly reckless, leaving a trail of bodies behind as she continues to escape the same fate.

In “Nightshade,” the farm where June and the other escaped maids are hiding receives an unwanted visit from wardens looking for the missing warden Esther (McKenna Grace) savagely murdered in the season premiere.

She does a good job covering everything up and assuring them that she hasn’t seen the missing Guardian. They ask to speak with her Marthas but she says that they are bottling cider. Should she go get them? No, it’s okay, they answer, they will come back. Ominous, but with a little planning, it’s not that bad. All they have to do is hide for a few days in the woods and once the danger is over, leave.

But this is never mentioned as an option. June tells Esther that means “I must go.” She’s suddenly pretty cool and aloof with Esther, which is confusing, especially given the young bride’s mercury flipping from mood to mood in the blink of an eye.

June goes with the driver to a nearby mansion serving as Jezebels – essentially a brothel for the powerful men of Gilead, similar to the urban brothel that Fred (Joseph Fiennes) took to June before. This is where a Mayday contact, Daisy (Laura Vandervoort) is locked up. She turns out to be one of the sex slaves – not prostitutes since they have no choice in the matter – of this original Jezebels, and she knows how June killed Commander Winslow when he tried to rape her. .

Anyway, one thing leads to another and June finds out that Esther poisoned her husband with nightshade to keep him under her control. This explains why he is so absent and forgetful. June was eager to kill the military commanders who are currently stationed at the Jezebels before heading to the front lines near Chicago. So she and Esther make a big batch of poison and she leaves for Daisy. The two poison the alcohol that the commanders drink and the aunt in charge of watching the girls.

The plan goes off without a hitch. The men are drunk, have a good time “partying” with the women (who pretend to be having a good time) and they happily hang around poisoned alcohol one after another. June feels pretty good when she comes out of the Jezebels and returns to the shelter.

But when they get there, something is wrong. All the lights are on but it’s quiet. Too silent.

They pull over and she tells the driver to get out of here, but he won’t leave her behind. I don’t know why June thinks she can lead Everybody around but whatever. She was right. As they approach the barn where everyone was dancing and having fun earlier, there is a photo and the driver takes one between the eyes. June’s face is covered in blood as the driver collapses to the ground. A dozen laser sights are suddenly focused on June as she searches for the driver’s pistol.

And then comes out Nick (Max Minghella). “Where are the maids?” he asks before slowly walking towards her. He bends. “I’ll try to keep you alive,” he said. And then they took her away. Already captured. One brief moment of bittersweet revenge before captivity rushes in.

Why didn’t June send the other women to the new shelter before she left? Why not meet them there instead of waiting and risking so much? This is the sort of thing that knowledgeable people – and especially those who fear for their lives – would do. It is a simple plan, easy to execute. But no, The Handmaid’s Tale, like so many other series, forces its characters to do silly things to advance the story.

June, in particular, continues to drive me near bad with her bad choices. Of course, I can see why she would want to kill these commanders, but what happened to the sober month of June that we saw Esther tell Esther to wait patiently, things are too hot? Hasn’t she realized how much her actions lead to pain, suffering and death for so many others every time? She wants to make little bumps in the machine that is Gilead rather than scheming and planning and coming up with something that could really leave a mark. It reminds us quite poignantly of when Daisy tells her that they “cleaned up the house” at the Jezebels’ house after June killed Winslow (Chris Meloni). Daisy was one of the “lucky ones” who survived. June doesn’t seem to bother at all.

Back in Toronto, we are dealing with survivors of Gilead. Luke (OT Fagbenle) is still overcome with guilt and worry in June. He and Moira (Samira Wiley) have a charity they work for called Angel’s Flight, which helps released Gilead children find homes, get supplies, and more. It is a small effort to help and perhaps to appease their guilty conscience.

The most interesting – but also somewhat confusing – story revolves around Serena Waterford (Yvonne Strahovski) and her husband Fred. Both live in cushy prison cells after being returned to each other. Bafflingly Serena did not ask for immunity when she returned her husband. Even stranger is the government’s willingness to arrest and charge Serena. As she points out – reasonably enough – they’ve now completely ruined their star witness against Fred.

She thinks she can manipulate Fred into dropping his accusations, but when she visits him, he sees through her ploy. “You’re getting rusty,” he told her. There was a time when she could make him do whatever she wanted. She tells him that she just wants her daughter to come back.

“Nichole is no more your daughter than she is mine,” he told her (someone had to do it!) “And if you think I’m going to let you have her, walk free and start.” a new life, you’re delusional.

What did you think of episode 2?

Epic is trying to get PlayStation, Xbox and Nintendo games on EGS