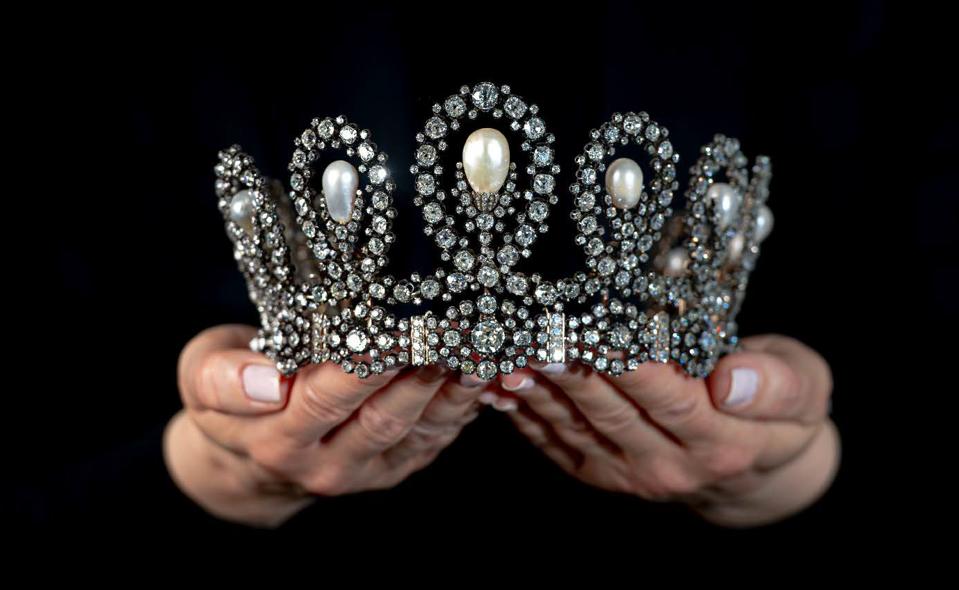 A tiara of natural pearls and diamonds of royal provenance is one of the lots presented at the Sotheby’s Geneva Magnificent Jewels and Noble Jewels auction on May 11. It will share center stage with several important gemstones and colored diamonds, including the largest Kashmir sapphire ever to be auctioned. . His estimate is $ 1 to $ 1.5 million.

The jeweled headdress is said to be passed down through generations of Italian royalty, including the House of Savoy, among the oldest royal families in the world.

The transformable jewelry comes with a report from the Swiss Gemmological Institute (SSEF) indicating that the 11 pearls were found to be natural, saltwater. Natural pearls were a symbol of wealth and status due to their great beauty and rarity. They were prized by the royal families of Europe in the 18th and 19th centuries. Today, natural pearls of royal and aristocratic provenance are still sought after by collectors. In 2018, a pendant of natural pearls and diamonds from Queen Marie Antoinette’s personal collection soared to $ 36.2 million at Sotheby’s Geneva, breaking its high estimate of $ 2 million and setting a new auction record for a jewel of natural pearls.

“Combining two ancient symbols of wealth and status (natural pearls and helmet), the tiara that we have the privilege to present in Geneva in May sums up all the splendor, power and presence associated with royal jewelry,” said Benoit Repellin , specialist in Sotheby’s jewelry in Geneva. .

Sotheby’s has come up with a new way to promote the tiara. He created an augmented reality (AR) Instagram filter that allows people to virtually try on the tiara and capture a photo of themselves wearing the headset against the 360-degree backdrop of the Palazzina di Caccia di Stupinigi in Turin. – formerly a royal hunt. lodging for the House of Savoy. Jewelry influencers, journalists and many of Sotheby’s 3.8 million subscribers have registered wearing the AR tiara.

The tiara will share the limelight with several precious stones and colored diamonds, important and rare. Among the best lots is a sapphire and diamond brooch from the 1930s, with an oval shaped Kashmir sapphire of 55.19 carats, alongside a cushion shaped Kashmir sapphire weighing 25.97 carats. The first sapphire is the largest sapphire from Kashmir to be auctioned. It came from the collection of Maureen Constance Guinness, Marquise de Dufferin and Ava (1907-1998).

The brooch was designed as a stylized ribbon, set with two sapphires and further embellished with circular and baguette-cut diamonds. His estimate is $ 2-3 million.

“Kashmiri sapphires over 30 carats are a very rare event, so the appearance of a 55.19 carat piece of jewelry – the largest ever sold at auction – is a significant event,” said Repellin. “Recognizing distinguished provenance and set like a stunning brooch alongside another Kashmir sapphire, it will undoubtedly generate a lot of interest among collectors.”

In addition, two prominent emeralds are sold in separate lots from the same “important noble collection,” the auction house said.

The second is an emerald and diamond brooch-pendant combination by Harry Winston, circa 1974. It is set with a Colombian pear-shaped emerald of 104.40 carats. His estimate is $ 1 to $ 1.5 million.

Other jewelry from the same private noble collection include:

* A sapphire and diamond necklace supporting a detachable pendant set with a cushion-shaped Ceylon sapphire of 111.73 carats and the desired color “royal blue”. His estimate $ 1.5 million – $ 2.5 million.

Sapphire and diamond necklace by Harry Winston, circa 1969, with a removable pendant set with a cushion-shaped Ceylon sapphire of 126.43 carats. His estimate is $ 1.2 million – $ 1.8 million.

The catalog for the sale has not yet been released, but as of now the main lot is a 40.08 carat emerald cut type IIa diamond, color D, flawless, type IIa with excellent polish and a symmetry, mounted on a ring. His estimate is $ 3.7-4.5 million.