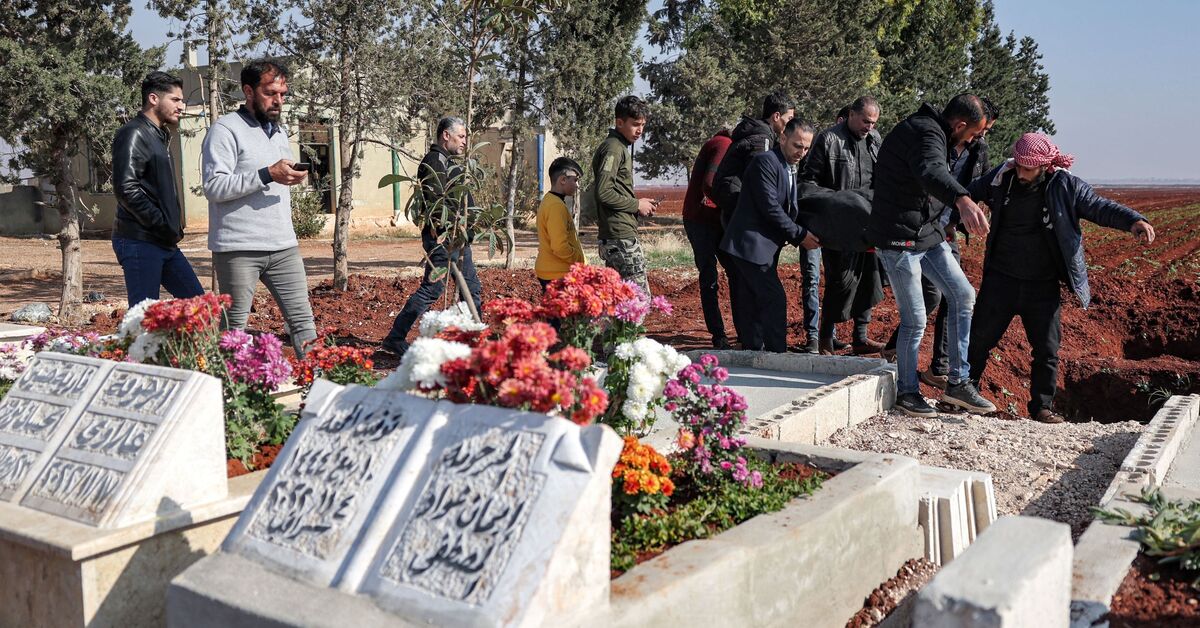 as Turkish president Recep Tayyip Erdoğan warns of a possible new ground incursion into neighboring Syria, officials from the Kurdish-controlled region pleaded with the Biden administration to intervene.

Iham Ahmed from the Syrian Democratic Council, the political wing of the US-backed Syrian Democratic Forces (SDF) in northeastern Syria, the foreign minister has written Anthony Blinkurging the government to speak out strongly against a possible Turkish invasion, Al-Monitor has learned.

In a letter sent to Blinken on Tuesday, the chairman of the SDC’s executive committee described his concern that Turkey was trying to occupy new Syrian land with its threatened ground invasion. Ahmed argued that a renewed offensive would undermine the SDF’s ability to fight the Islamic State, as well as the notoriously overcrowded Al-Hol camp that holds displaced families linked to the extremist group.

Ahmed’s call comes as Turkish warplanes continue to strike towns in northern Syria in retaliation for a November 13 bombing that killed six people and injured more than 80 others in central Istanbul. No group has claimed responsibility for the attack and in her letter, Ahmed denied any SDF involvement.

Syrian Kurdish officials say more than 20 people have been killed, including civilians, in Turkish attacks on the People’s Protection Units (YPG), the militia that forms the backbone of the SDF, since Sunday. A day after the Pentagon called for de-escalation, two SDF fighters were killed Tuesday in a suspected Turkish drone strike within 400 feet of a base used by US forces. Jared Szuba reports.

Washington’s support for Syrian Kurdish fighters remains a source of tension in relations with Ankara, which sees them as an extension of the outlawed Kurdistan Workers’ Party (PKK). Both Turkey and the United States label the PKK, which has fought a decades-long insurgency against the Turkish state, as a terrorist group.

On Monday, Turkish officials blamed Kurdish militants for a mortar attack that killed two people — a 5-year-old boy and a teacher — in southern Turkey’s Gaziantep province.

A Turkish official, who was reached for comment, said the latest military operation in Syria, dubbed “Claw-Sword”, aims to “protect Turkey’s borders and tackle the root cause of terrorism”.

Biden administration says Turkey has a right to defend itself but warns that cross-border violence could undermine Ankara-Washington’s shared goal to defeat Islamic State militants, estimated to number between 6,000 and 10,000 in Syria and Iraq according to the US military. Nearly four years after the collapse of IS’s self-proclaimed caliphate, several hundred US troops remain stationed in the Kurdish-led area to help destroy the remnants of the terrorist group.

The US has “consistently communicated our grave concerns to Turkey, publicly and privately,” a State Department spokesman told Al-Monitor. “We have urged Turkey against such operations, just as we have urged our Syrian partners against attacks or escalation.”

Such statements “are definitely not strong enough”, SDF commander Mazlum Kobane told Amber Zaman on Tuesday. “They need to do more,” he said of the Biden administration. (You can read his full interview here.)

But Dareen Khalifaa senior Syria analyst with the International Crisis Group, warned that the SDF should not rely on the United States alone to deter Turkish military action.

“Turkey is an important NATO ally for the US, and as bad as relations are, there is a reason for it,” Khalifa said. “The US can – and probably will – impose some sanctions on Turkey if there is a Turkish ground incursion in specific areas, but otherwise it won’t blow over its relations with Turkey.”

Officials at the Turkish embassy in Washington say conflict resolution channels with the Americans remain open. Wednesday Chairman of the US Joint Chiefs of Staff Mark Miley spoke by phone to his Turkish counterpart, Gen. Yasar Guler. The Pentagon description of their call made no mention of Syria, but said they discussed “several points of mutual strategic interest.”

also Wednesday, Sinam Mohammed, the top representative of the SDC in Washington, held meetings with Biden administration officials. “They told us, ‘We don’t want the destabilization of the region,'” Mohamad said. “But is Turkey listening? No, I do not think so.”

To get The takeaway meals every week in your inbox, subscribe here.

Iran ‘failed’ to use nuclear escalation as leverage

Iran is now enriching uranium at its underground Fordow plant to a step away from weapons-grade levels. Director General of the International Atomic Energy Agency Rafael Grossi on Tuesday confirmed Iran’s claims that it had begun producing 60 percent enriched uranium at a second nuclear power plant.

See also  Russian conscripts have "no idea what to do" in Ukraine: soldier's wife

It comes after the IAEA board of directors, made up of 35 countries, last week approved a resolution ordering Iran to cooperate with a years-long investigation into undeclared uranium traces. Talks to revive the landmark nuclear deal derailed after the Iranians insisted that the UN watchdog drop the investigation.

A State Department spokesman denounced what Washington sees as an attempt by Tehran to influence the IAEA.

“Iran’s apparent notion that it could somehow put pressure on the IAEA or its member states on the issue of ongoing security investigations…by further escalating its uranium enrichment activities is misleading,” the spokesman said.

As Ben Caspit reported for us, Chief of Staff of the IDF Aviv Kochavi met with top officials in Washington this week to share new information about Iran’s enrichment intentions. Despite other assurances from the US, Israel remains concerned that the Biden administration could resume indirect negotiations on the nuclear deal now that the midterm elections are over.

Two US citizens were injured in twin explosions in Jerusalem that killed a 16-year-old boy at a bus stop on Wednesday, the US ambassador to Israel said Tom Nides confirmed in a tweet.

Israeli police are searching for the suspected Palestinian attackers whose bombings injured more than 20 people. Police believe the explosions were coordinated and caused by remotely detonated nail-loaded explosives.

The attack comes as the incoming prime minister Benjamin Netanyahu is in talks to form a new right-wing coalition government that is expected to take a tougher stance on Palestinian terrorism.

The Democratic government in Washington is concerned about the likely nomination of an ultra-nationalist member of the Knesset Itamar Ben Gvir as minister of public security, which would put him in charge of the Israeli police. Rina bassist reports that Ben Gvir, who quickly arrived at the scene of the initial attack on Wednesday, told the crowd that Israel needs to “go back to targeting assassinations.”

US citizen detained in Saudi Arabia amid OPEC tensions

A US citizen from Michigan is being held in Saudi Arabia without charge for three weeks, his lawyer told Al-Monitor, as relations between Riyadh and Washington remained tense over oil supply cuts.

The details of Mohammed Salemarrest are murky. The 63-year-old Yemeni-American was visiting the holy city of Mecca to perform the umrah pilgrimage on Nov. 1 when he got into a fight with security guards, his family’s lawyer in Michigan. Abdullah Moughni said. Out of frustration, Salem later told two men who identified themselves as Libyan that “if it weren’t for Mecca and Medina, we would burn this country to the ground.”

The men revealed they were Saudi government agents and arrested him, Moughni said. Salem is now in a maximum security Dhahban Central Prison and is not allowed any contact with his family.

“Saudi Arabia should be able to investigate any situation they believe could harm their country,” Moughni said. “But to detain someone for 20 days for speaking negatively against a government without any legal representation – that’s just wrong.”

The story, which first appeared in local Detroit media, follows the capture of the Saudi American Saad Ibrahim Almadi and brief detention of US citizen Caroline Morris this month. Several other dual nationals are being held in the kingdom under travel bans.

Other top stories from our contributors

• Fehim Tastekin explains why Iran is increasingly concerned about Azerbaijani and Turkish geopolitical gains in the region.

• Netanyahu’s deal to legalize dozens of settlements in the West Bank has further diminished hopes for a peace process. Ahmad Melhem writes.

• Nazlan Ertan analyzes what the enthusiastic handshake between the Egyptian president Abdel Fattah al-Sisi and Erdogan on the sidelines of the World Cup means for their countries’ burgeoning rapprochement.

• Qatar spent $300 billion on the World Cup, making it by far the most expensive tournament ever. For Al Monitor PRO, Samuel Wendel explores scenarios for how Doha’s big gamble may pay off.

Jared Szuba contributed to this report.