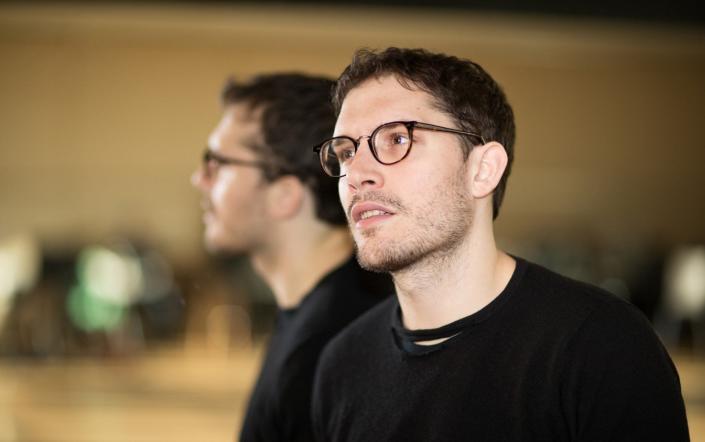 “Incongruous at best and destructive at worst.” Robert Icke, the prodigy of British theater – or enfant terrible to some – is talking about the Arts Council England cuts which left several institutions (including the Donmar Warehouse and Newbury’s Watermill) without funding earlier this month, effectively drumming the English National Opera out of London. “It has been proven that art is a very, very good investment, and in the Brexit era you would think that art would be one of the most important things for British soft power.”

When Icke speaks, the Art Council must listen. The 35-year-old director, mastermind behind fresh new versions of The Oresteia and Mary Stuart, has been the most exciting voice in British theater for more than a decade. Slipping seamlessly between subsidized stages and the commercial West End, his unique style embodies both erudition and excitement, as he sweeps away the accumulated layers of performance dust on classic lyrics – his version of Hamlet starring Andrew Scott was thrillingly urgent, despite the long term – to return them to a sparkling, newborn state.

Although he has been a darling of critics, Icke wasn’t always so full of praise for our theater scene, once saying he found much of it boring. His spirited views have not been softened. “One of the problems with playing classical plays is that we call them ‘revivals’, which makes a dead thing come to life. That’s a long way between death and life. Sometimes we see the corpse sitting there with some makeup on and you think, “It’s still dead though!”

Certainly his production of The Doctor, currently in the West End, is anything but boring. A dazzling modern spin on Arthur Schnitzler’s 1912 medical-ethical drama Professor Bernhardi, starring Juliet Stevenson in the best form of her career as the uncompromising but contentious Dr.

Icke is well aware that discussions of labels and identity have become even more of a tinderbox in the three years since the play premiered at North London’s Almeida Theatre, a venue where he held the position of associate director for six years. held. ‘In The Doctor the question is: what is identity and is it important,’ he says. “When does it matter and when does it not matter? When is it central and useful and when is it a bit silly?

“Is the question deep enough to merit weeks and weeks of thought and research? If not, don’t do the show. If I know how I feel about something, it’s an essay, not a production. I’m not preaching.”

I ask Icke what he thinks of the entry of cancel culture into the theater world, such as the jettisoning of Terry Gilliam’s production of Into the Woods by Old Vic, in the face of the director’s controversial comments about the MeToo movement and diversity.

“When you say ‘cancel culture’ it sounds unfairly applied, but sometimes someone being canceled is just a result of their actions,” he says. “As the piece proves, I feel double-edged about it.

“There is definitely a generational culture change within our industry that feels largely positive to me. It feels like a lot of things are no longer allowed that should never have been allowed anyway. You talk to young women who say they felt really threatened.”

One of the specters of The Doctor, as Stevenson’s Wolff burrows deeper and deeper into a PR crisis, is the anonymous pile-up of social media. Icke knows how that feels: he received a lot of reactions after his award-winning breakthrough in 2015 with The Oresteia.

“Suddenly you become someone on the internet that people think they can just butcher it,” he says, citing “envy and hatred as a constant presence like radiation… you can’t help it.”

Icke has always been a polarizing figure. “Arrogance” is a word that is often used, with a leading industry figure telling me, “He is very confident in his own right and very dismissive of others.” Still others, such as Dominic Cooke, who cites the “dazzling energy and intelligence” of his work, are considerably kinder.

My impression of Icke, when we meet on an unusually warm November day near his North London home, is that of a calm, kind and considerate person. Regarding the label “arrogance,” he says, “We’re all trapped in archetypes, especially in interviews. I’m still quite young to do the work I do, so the available archetype is aggro, the “destructive young Turk” thing. I’ve never really felt that.” He smiles mischievously before adding: “When I was an assistant director, I remember someone saying to me, ‘In this industry you’re either nice but a bit rubbish or talented and difficult. They’ll look at you one way or another.’ I think I’d rather be talented…”

Icke is also “white, male, and Oxbridge,” things that have hit back particularly in the industry in recent years. Yet he doesn’t fit the stereotype: as someone who grew up in a distinctly immortal environment in Stockton-on-Tees, with parents who started out as teachers and went on to become tax inspectors and accountants, and went to a comprehensive school, he has a lot to say about this.

“White and male is how you are born, so that seems like a tough thing for someone to have to answer on any front. The Cambridge thing I’ll defend, which is hugely out of fashion in British theatre. Cambridge costs as much as any other university… Sometimes I feel like it’s confused with ‘private education’ in people’s minds, and I didn’t go there because I’m rich. I am not rich.”

He pauses and gestures around: “You couldn’t buy a flat on this street, even if you sold my mother’s, my father’s and my brother’s house and added up all the proceeds. So I think Cambridge kind of fits into that part of the British psyche [which conflates wealth with opportunity]”.

In recent years, Icke, who started his career with Rupert Goold at the tour company Headlong, has worked in Europe, mainly at Ivo van Hove’s International Theater Amsterdam. “My process fits European theater very well,” he says, referring to the ensembles of paid actors with whom he can work organically to create productions, in a way he compares to “making a couture dress.” While he’s content on the mainland, he doesn’t see this as a permanent move and has plans to direct his first feature film next year.

In terms of theatre, it seems obvious that his next step would be to run a building, in order to have complete creative control. Yet he is convinced that this is not the way for him. “Now when you do one of those jobs, you spend a lot of time worrying about money,” he says. “I could do that at home.”

“I think the climate is tough in British theater right now, and I don’t think people are excited about people who look like me running buildings. I don’t say that with any feeling of pity, by the way,” he says before softening into a broad smile.

“I also want to be a very good father. I don’t want to bring up someone who says, ‘My dad was never there because he was always rehearsing.’”

Icke has a one-year-old daughter with his longtime partner, actress and writer Zara Tempest (with whom he is collaborating on a film adaptation of Zadie Smith’s On Beauty). He proudly shows me a video of her waddling around the living room, displaying all of her father’s fearlessness. Let’s hope this young girl will be a decisive factor in bringing Icke back to these shores for good. It would be a crime for British theater to let a rare and precious talent like his escape.