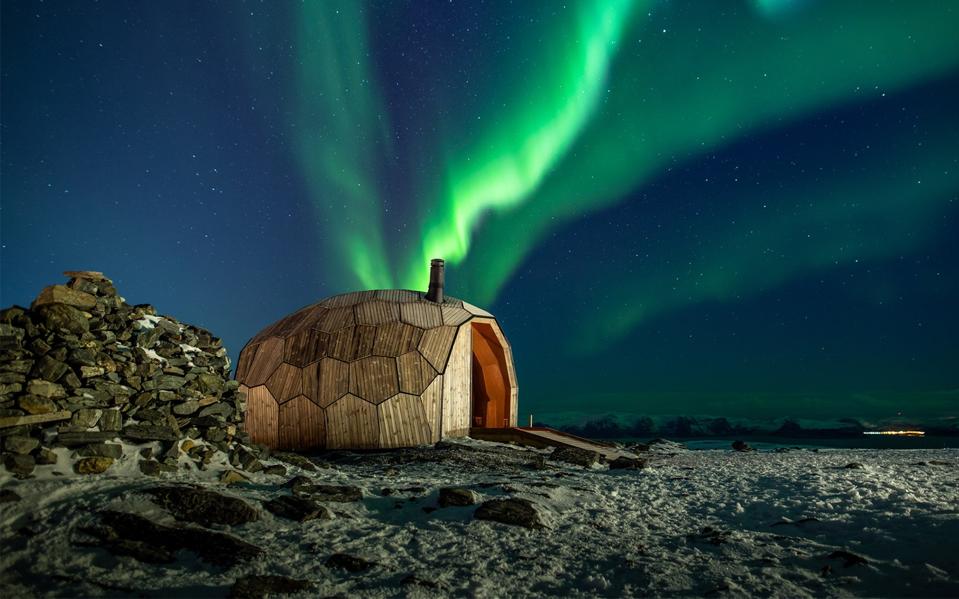 Few things are more quintessentially Norwegian than resting in a wooden cabin on a long hike or cross-country ski tour. There are thousands of chalets all over Norway, ranging from simple wooden huts to family-sized lodges with all mod cons.

In recent years, Scandinavian architects have strived to reinvent the concept of a hytte—As these cabins are known in Norwegian – using modern design trends and eco-friendly materials while staying true to the rich traditions of cabin life. Here are some of the most notable.

Resting nearly five feet above the ground on 45 wooden columns, this three-bedroom cabin was designed by Casper and Lexie Mork-Ulnes for their own family.

The architects call the project a “site specific response to the context and cultural landscape” of Kvitfjell. Sheep and cows sometimes graze on native grasses under the raised structure, which refers to traditional Norwegian building methods of centuries past.

The exterior is clad in Skigard – long round post logs traditionally used as diagonal fences by Norwegian farmers.

This compact family cabin in Røldal, Norway was designed by Reiulf Ramstad Arkitekter to preserve the surrounding landscape as much as possible. As such, it has been divided into a master cabin and a nearby annex, which also provides flexibility for the family.

The two wooden cabins have sloping undersides due to the steep terrain, while a large glass wall instead of windows allows you to make the most of the view of the forest.

It’s not just private cabin owners who experiment with modern design. The Norwegian Trekking Association (DNT) owns and operates a nationwide network of cabins of all shapes and sizes. The local organization DNT in Hammerfest wanted a new concept of huts to encourage more hiking in the mountains surrounding the town in the far north of Norway.

Spinn Arkitekter designed Varden, a wooden cabin with a honeycomb structure, in collaboration with Format Engineers. It has an “organic” prefabricated frame to echo its rugged arctic setting while also making installation easy and withstanding harsh polar winters.

The rounded shape remains naturally snow-free, reduces wind pressure and is a material-efficient construction method. The door is recessed to help keep snow at bay, while a mall wood stove provides warmth and light to the cozy interior.

Given the popularity of its location among hikers keen to see the Norwegian Jostedalen Glacier, the local organization DNT has raised funds for a replacement in the local community. Snøhetta architecture studio won the design competition.

During the design process, Snøhetta considered the potential for a repeated storm alongside the diverse needs of hikers. Regular users of the old lodge ranged from serious backpackers looking for overnight accommodation to families with young children for a short walk.

The result is a group of pentagonal buildings with angles designed to deflect the wind. Overnight accommodation is split between a shared dormitory and an elegant private unit.

“The pentagonal shapes of the cabins stand out from the traditional Norwegian cabin design. Although Tungestølen’s colors and materials are inspired by other surrounding cabins, these new cabins represent something new and surprising, ”Chief Architect Anne Cecilie Haug told Dezeen.

Your own modern cabin

Of course, not everyone can afford to pay an architect to design a cabin from scratch. Snøhetta has also worked with Rindalshytter, the oldest producer of ready-made log cabins in Norway.

The result of the collaboration – the Gapahuk concept – is designed to adapt to any terrain in any direction, by the sea, on a mountain or in the woods. Open at both ends to fill the cabin with light throughout the day, the cabin is designed around common areas, inside and out.

“We were inspired by the simple life in nature, lying on the ground and stretching a simple roof over the top to create shelter from the elements,” Haug said.