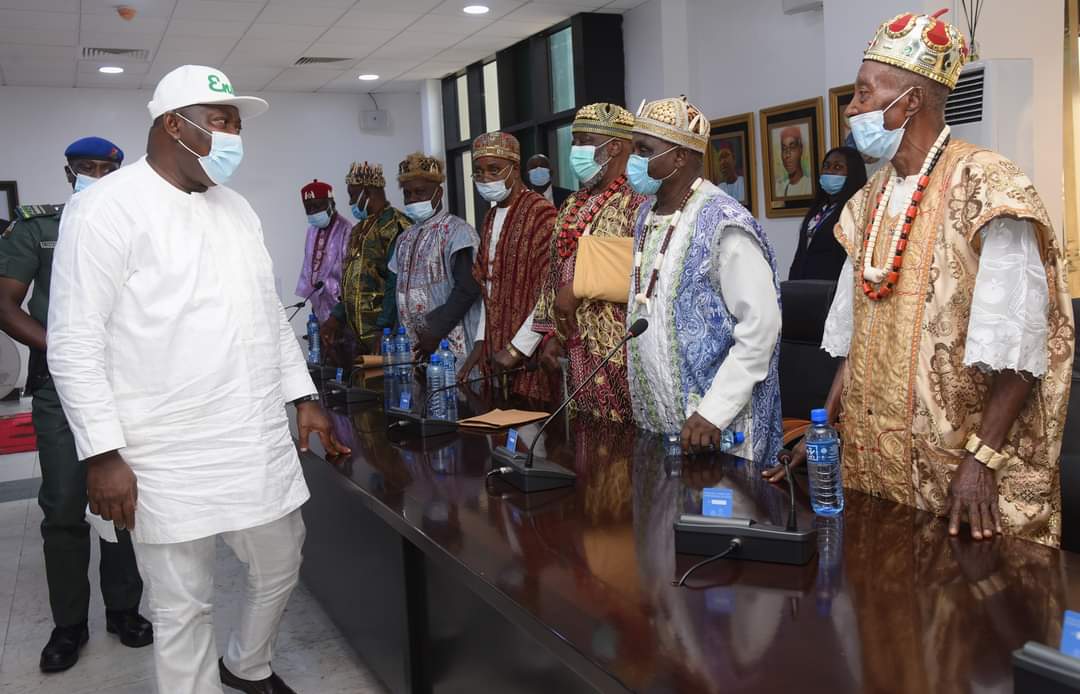 Traditional leaders from the Igbo-Etiti local government area of ​​Enugu State on Thursday paid a solidarity visit to Governor Ifeanyi Ugwuanyi at the government house, Enugu, congratulating him on his giant development progress in particular in rural areas as well as its unprecedented commitment to peace and security despite the nation’s economic, security and public health challenges.

The Royal Fathers said they were delighted that the peace, security and good governance established in Enugu State by the administration of Governor Ugwuanyi made the state “the destination of choice for all Nigerians, especially our brothers from the South East ”.

Under the leadership of the Chairman of the Council of Traditional Igbo-Etiti Rulers, HRH Igwe Michael C. Odo, the Traditional Rulers, said: “Your Excellency, we visit you today with pride and satisfaction. It is indeed needless to say that since you took office in 2015, you have clearly and undoubtedly propelled the State of Enugu into the world with your massive and extensive infrastructural development in the 260 neighborhoods and 450 autonomous communities of the ‘State.

“We cannot thank you enough for the love you have shown to our people of the Igbo-Etiti local government area. You have indeed shown that love in the number of critical appointments you have given to our people, as never before in the history of the state.

“Your Excellency, we are greatly indebted to you for the massive development projects you have carried out in our local government.

“The main ones include the construction and commissioning of the state-of-the-art Ogbede General Hospital with staff quarters; construction of all the structures required for the immediate take-off of the Federal Polytechnic Ohodo that you have attracted; construction of the Ohodo-Umunna-Ozalla-Ohebe-Aku road by the State Rural Access and Mobility Project (RAMP).

Emphasizing that they are proud of his administration’s unique and exceptional efforts to transform the state and ensure the peace and security of life and property, the monarchs assured Governor Ugwuanyi of “our loyalty and uncompromising support,” declaring : “As traditional leaders, we are irrevocably attached to the declaration of our people during the“ Odinma Nsukka gathering at Nsukka high school ”.

The event was attended by senior government officials of the Igbo-Etiti LGA such as the Secretary of the State Government (SSG), Professor Simon Uchenna Ortuanya, two members of the House of Assembly of the ‘State, Rt. Hon. Ezenta Ezeani and Rt. Hon. James Akadu; Land and Urban Development Commissioner, Nnanyelugo Chidi Aroh; the Chairman of the Board, Hon. Ms. Nkechi Ugwu-Oju, and the Governor’s Special Advisor on Rural Development, the Hon. Ikenna Nwodo.

Others were the Permanent Secretary of the Department of Transport, the Hon. Ogbons Idike, the permanent secretary of the Ministry of Health, Dr Ifeanyi Agujiobi, their counterpart from the Debt Management Office (DMO), Chinonye Okegbe, and Samson Ezea, the media assistant to the governor.