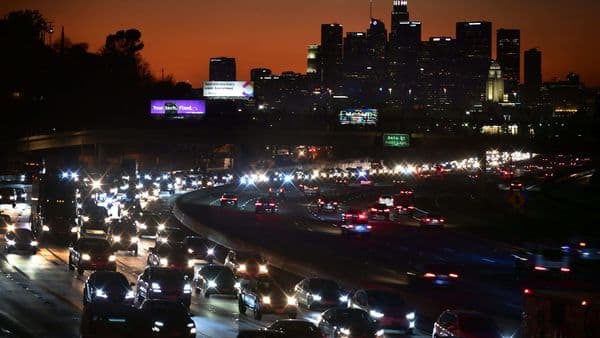 For six consecutive days, until Tuesday, daily passenger volumes at airports exceeded two million people, a streak unprecedented since before the pandemic, according to the Transportation Security Administration. Sunday, when around 2.4 million people are expected to pass through airport security, it will likely be the busiest day yet, TSA officials said.

Thanksgiving is always one of the busiest travel times of the year, marked by long lines and large crowds at airports. There are additional constraints this year. Airlines have experienced a difficult re-emergence in the wake of the pandemic, and some carriers have been particularly vulnerable to inclement weather or issues that have caused their operations to fail for days, resulting in thousands of canceled flights.

So far, there has been little major disruption this week. Less than 1% of U.S. domestic flights were canceled Monday and Tuesday, according to FlightAware, a flight tracking site. As of Wednesday evening, airlines had canceled around 100 US flights that day.

“I was very nervous about traveling, especially the Wednesday before Thanksgiving,” said Chloe Corcoran, who flew from Los Angeles to visit family in Rochester, NY. “I feel extremely lucky that things turned out well.”

See also  Can Biden come back? Many others have

While there are still several vacation days left, the airlines have had some things in their favor. On the one hand, the weather was generally calm, as the first storm forecasts fizzled out. Bob Larson, senior meteorologist at AccuWeather, said there could be local weather issues causing travel delays in parts of the country, but more severe weather conditions are not expected.

Carriers have also taken steps to strengthen their operations before the holidays. Southwest Airlines Co., Spirit Airlines Inc. and Allegiant Travel Co. reduced their flight plans in the last few months of the year to better align schedules with personnel and other constraints.

Airlines such as Southwest, JetBlue Airways Corp. and American Airlines Group Inc. also offer incentives such as cash bonuses and additional compensation for employees who work while on vacation. American flight attendants who have perfect attendance during the holiday period will be in line for triple pay.

“It showed us what can happen if a really disruptive situation hits one of our airports. And we can’t let that happen over the holidays, ”Parker told flight attendants at a town hall last week. Mr Parker said the airline is ready to handle anything that may arise, and there are already signs its incentive program is paying off, with flight attendant absence rates lower after it goes live. square.

Of course, there are still headaches. Unlike last year, when warnings from U.S. health officials kept people at home, travelers meet vacation crush again. Airports have warned parking lots are filling up and the TSA has advised people to arrive early as long lines return.

Larger crowds have raised fears of a new wave of incidents involving disruptive passengers that have resulted in delayed or diverted flights, an issue the industry grapples with year-round. The frequency of these incidents has declined since the start of the year, but the Federal Aviation Administration launched more than 1,000 investigations in 2021, compared to 2019 when there were only 150 such investigations.

Attorney General Merrick Garland, in a memo on Wednesday, ordered U.S. prosecutors to prioritize prosecution of crimes committed aboard planes endangering the safety of passengers and crew, citing concerns about a increase in these behaviors with millions of people traveling during the holidays. The FAA said earlier this month it had referred some three dozen incidents to the FBI for investigation.

Ashley Brown was worried about the crowds the day before Thanksgiving, so she chose to depart from Hollywood Burbank Airport, which is smaller and easier to navigate than LAX. However, when she pulled up to the airport on Wednesday morning, traffic was already blocked. The security line extended to the door and onto the sidewalk.

“I literally got in line and prayed,” she said. After waiting around an hour, Ms Brown said she made it to her door a few minutes before boarding began.

Many start-ups despite the crisis