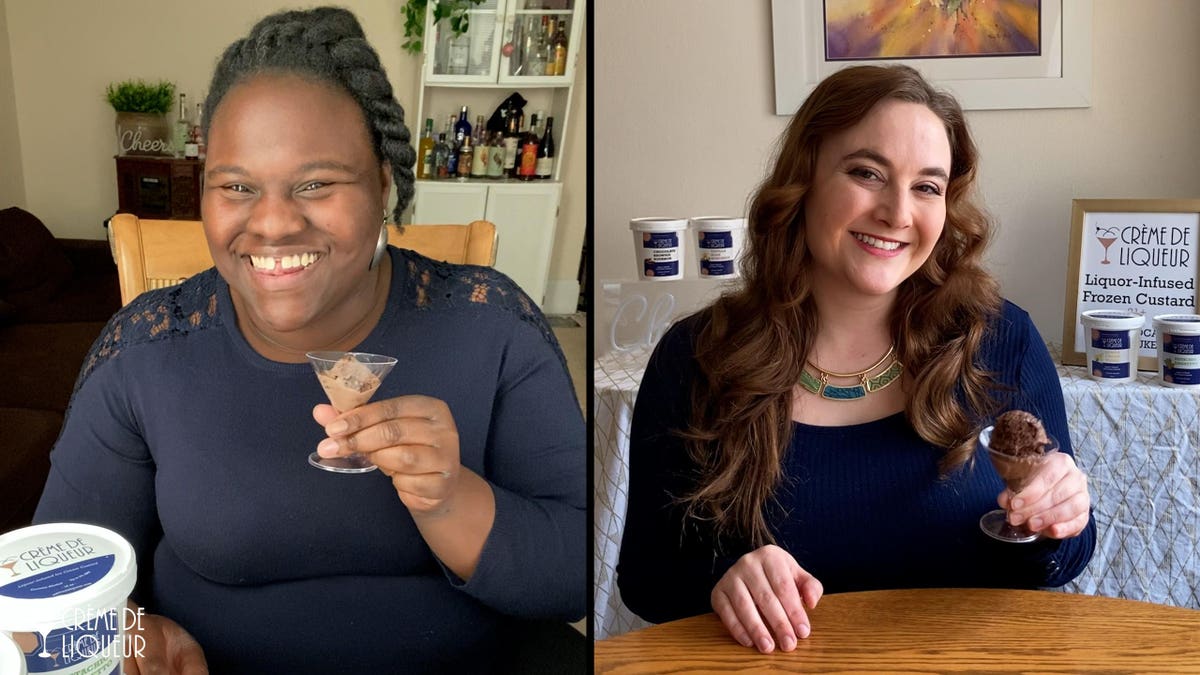 Nisreen Galloway and Elizabeth Nash studied writing and literature at Emerson College in Boston, but the two met and became friends in an entrepreneurial class.

Galloway grew up in Boston and Nash grew up in Milwaukee, but both shared a legacy of combining ice cream and spirits.

“We’re both foodies,” Galloway says. “My dad poured a splash of brandy over ice cream sundaes.”

“My family and friends had these very elegant dinners, and they served a sorbet with a splash of vodka, and that stuck with me for years,” adds Nash.

The two loved ice cream and combining ice cream with liqueurs, so that became the genesis of Crème De Liqueur liqueur-infused frozen custard.

The two started working on their business in 2019, and in July 2021 they debuted their spicy ice creams in Boston and Milwaukee. The unusual thing about this craft business is that it is locally based in Boston, where Galloway lives, and Milwaukee, where Nash lives.

“We work with local distilleries and local partners in every state,” says Nash. “And it’s not just distillers. We look for local bakeries to mix things like brownies and cheesecakes.”

In addition to their four main flavors, they try out different flavors seasonally, and sometimes they try new flavors in just one city.

“Together, we’ve created a fall flavor that celebrates local character and brings three women-owned businesses together in one pint,” Galloway says.

Other fall flavors include a whiskey s’mores ice cream and a vanilla bean brandy. “We test flavors about every month and vary our selection based on the season,” says Nash.

The two started selling cups and pints of their infused frozen treats at farmers’ markets in both cities, and they expanded to include pop-ups and events, and now they’re in local specialty stores, as well as restaurants, bars, and distilleries.

“One of our favorite things (about both Boston and Milwaukee) is that they’re ice cream places pretty much year-round,” Galloway says.

“The cold doesn’t bother people too much,” Nash says. “Last year we sold our ice cream at a number of winter markets, including the Milwaukee Christkindlmarket. In fact, we were approached by the mayor of Oak Creek, Wisconsin, to come and sell at their farmers’ market because he had tried it at Christkindlemarket.”

The ice cream retails for $5 to $7 per serving and $13 to $16 per pint, and each ice cream has only 2 percent ABV. As their ice cream has gained a following, fans have been asking if they want to open outposts in Chicago and New York, as well as New Hampshire.

“As we grow, some things may need to shift a bit, but our goal is to stay local as the cornerstone of our business, with flavors unique to local areas,” Galloway says.