Speaking to the media after the incident, Muriithi alleged that a group of goons kicked her out of the event hosted by Kenya Kwanza running mate Rigathi Gachagua.

She noted that it took the intervention of the police to save her from the rogue goons.

Vice President William Ruto and his running mate Rigathi Gachagua at a rally in Uthiru on Sunday, June 5, 2022.

“They wanted to undress me but the police rescued me. They violently grabbed me and started chasing me from the forum as if I was a stranger,” she said. NTV.

The incident caught the attention of locals and UDA supporters who came to the scene to get a glimpse of what was going on.

Muriithi is convinced the attack was part of a grand scheme, as the thugs claimed she undermined another UDA political leader based in Kirinyaga.

Condemning the actions, Muriithi noted that the incident was aimed at tarnishing the Kenya Kwanza coalition’s brand and image, signaling friction within the alliance.

“Our national leaders are good people but a few local UDA leaders are spoiling [things] for them for their selfish interests.”

Vice President William Ruto’s camp is embroiled in a fierce sibling rivalry that has seen various party leaders clash publicly, though the DP has played down the fallout.

Tujibebe party leader William Kabogo and his Chama Cha Kazi counterpart Moses Kuria had vowed to prevent UDA campaigns in the Mount Kenya region due to a recent fallout that led to a bitter exchange between Kabogo and County Senator Kimani Wamatangi.

“Following the unfortunate incident of June 15, the Tujibebe Wakenya Party and the Chama Cha Kazi parties have decided to withdraw from the UDA caravans as they are clearly set up to embarrass other parties and demonize the Kenya Kwanza Alliance as a coalition,” read a statement. joint declaration of the two parties. 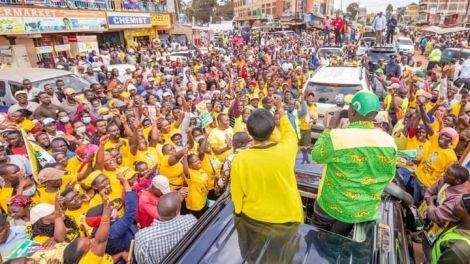 Kenyan company that has served billionaires, presidents and world celebrities