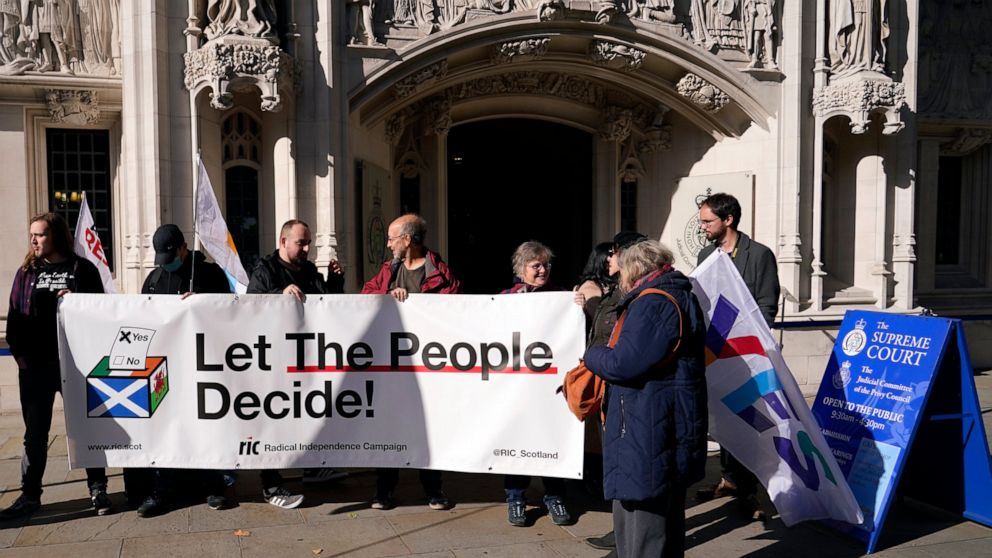 LONDON — Britain’s Supreme Court ruled on Wednesday that Scotland has no power to hold a new independence referendum without the British government’s consent. The verdict is a setback to the Scottish government’s campaign to break away from the United Kingdom.

Scottish First Minister Nicola Sturgeon said she would respect the ruling but continue the fight for independence, saying Scotland’s “democratic right to choose our own future” was at stake.

The High Court ruled that the Scottish Parliament “has no power to legislate for a referendum on Scottish independence”.

High Court President Robert Reed said the five judges were unanimous in the verdict, which came six weeks after lawyers from the pro-independence Scottish government and the Conservative British government presented their case at hearings in London.

Independence supporters plan to gather outside the Scottish Parliament in Edinburgh and other locations later Wednesday.

The semi-autonomous Scottish government wants to hold a referendum in October asking “Should Scotland be an independent country?”

The British government in London refuses to authorize a vote, saying the issue was settled in a 2014 referendum in which Scottish voters rejected independence by a margin of 55% to 45%.

However, the pro-independence government in Edinburgh wants to review the decision, arguing that Britain’s departure from the European Union – opposed by a majority of Scottish voters – has radically changed the political and economic landscape.

Sturgeon argues she has a democratic mandate from the Scottish people to hold another secession vote because there is an independence supporting majority in the Scottish Parliament.

At High Court hearings last month, Dorothy Bain, the Scottish government’s most senior prosecutor, said the majority of Scotland’s legislators had been elected on the basis of commitments to hold a new independence referendum. She also said a referendum would be advisory, rather than legally binding – although a “yes” vote would create strong momentum for Scotland to break free.

British government lawyer James Eadie argued that the power to hold a referendum rests with the British Parliament in London because “it is of vital importance to the United Kingdom as a whole”, not just Scotland.

Reed stressed that the court “has not been asked, and cannot be asked, to rule on the political question of whether Scotland should become an independent country.”

The UK government urged politicians in Scotland and London to move forward and focus on pressing issues such as a struggling economy and a crisis in the cost of living.

Scottish Secretary Alister Jack said: “The people of Scotland want both their governments to focus all of their attention and resources on the issues that matter most to them.”

But Sturgeon said the ruling was “a hard pill for any independence advocate — and certainly any democracy advocate — to swallow.”

“A so-called partnership in which a partner is denied the right to choose a different future … cannot in any way be described as voluntary or even a partnership at all,” she said. The route we take must be legal and democratic to achieve independence.”

Sturgeon said she would hold a de facto plebiscite on ending Scotland’s three-century-old union with England at the next UK national election, scheduled in two years. She said the SNP would hold a special conference next year to work out the details of that plan.

Polls show that Scots are roughly evenly split on independence – and also that a majority of voters do not want another referendum anytime soon.

Scotland and England have been politically united since 1707. Scotland has had its own parliament and government since 1999 and makes its own policy on public health, education and other matters. The British government in London controls matters such as defense and fiscal policy.