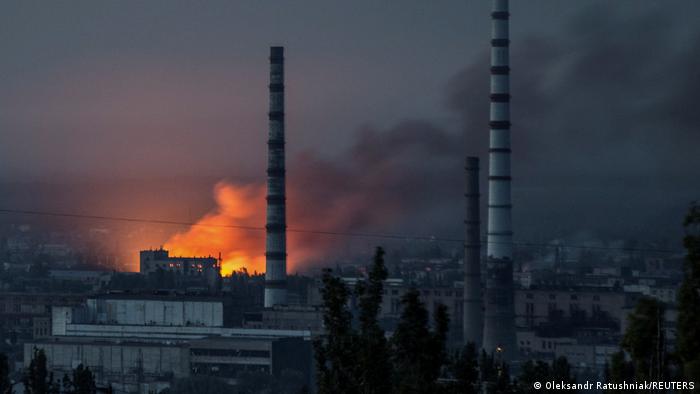 This story was last updated at 02:44 UTC/GMT

“It is also a historic decision that the European Council must now take,” she said, adding that she was “confident” in Ukraine’s prospects.

On Friday, the committee voted in favor of granting candidate status to Ukraine and neighboring Moldova.

EU foreign ministers are due to discuss the impact of the Russian invasion on global food security and European energy security at a meeting of its Foreign Affairs Council in Luxembourg.

Senior diplomat Josep Borrell said on Sunday that the EU was considering providing Egypt with up to 100 million euros ($105 million) to support the country’s agricultural sector and food reserves.

Egyptian Foreign Minister Sameh Shoukry is expected to join the ministers on Monday.

African countries have been particularly vulnerable due to the impact of war on global food distribution. Both Ukraine and Russia are major exporters of wheat and sunflower oil.

Ukrainian President Volodymyr Zelenskyy said in his nightly video address that a “historic week” had begun.

“I think it is obvious to everyone that since 1991 there have been few decisions as fatal for Ukraine as we now expect,” he said, referring to a expected decision from Brussels on Kyiv’s EU candidate status.

Zelenskyy added that Ukraine’s EU membership “meets the interests of all of Europe”.

The Ukrainian president warned that Kyiv expects an intensification of hostile activities by Russian forces, adding that Moscow was strengthening its forces near Kharkiv and in the Zaporizhzhia region.

Russia seizes a village near Sievierodonetsk

Russia said its forces seized the village of Metiolkine near Sievierodonetsk in the Luhansk region.

See also  Morning briefing on Ukraine: 'The whole of Europe is a target for Russia,' warns Zelensky

The village had less than 800 inhabitants before the start of the invasion. It is located about six kilometers (four miles) southeast of the main industrial center of Sievierodonetsk.

The Ukrainian military said Russian forces had had “partial success” in the region.

Sievierodonetsk was the scene of heavy fighting between Moscow and Kyiv. Pictured are the aftermath of a military strike on the Azot chemical plant where the remaining Ukrainian forces in the city were entrenched.

The Austrian government has announced that it will reopen a coal-fired power plant that was previously closed due to shortages due to reduced Russian gas supplies.

The station is located in the southern town of Mellach in the state of Styria.

Austria’s chancellery said authorities will work with the country’s main supplier, Verbund, to reopen the station.

What happened during the Russian invasion of Ukraine on Sunday

Moldovan President Maia Sandu has signed a law banning the broadcasting of news programmes, political TV shows and war films from countries that have not ratified the European Convention on Transfrontier Television, such as Russia.

Prominent Russian politician Konstantin Kosachev has denounced Lithuanian restrictions on rail transport between the Russian enclave of Kaliningrad and the rest of Russian territory, calling them an “illegal” ban and a “nascent blockade”.

Ukrainian President Volodymyr Zelensky has vowed to “take back everything that belongs to us” in southern Ukraine.

You can review our Sunday updates here.