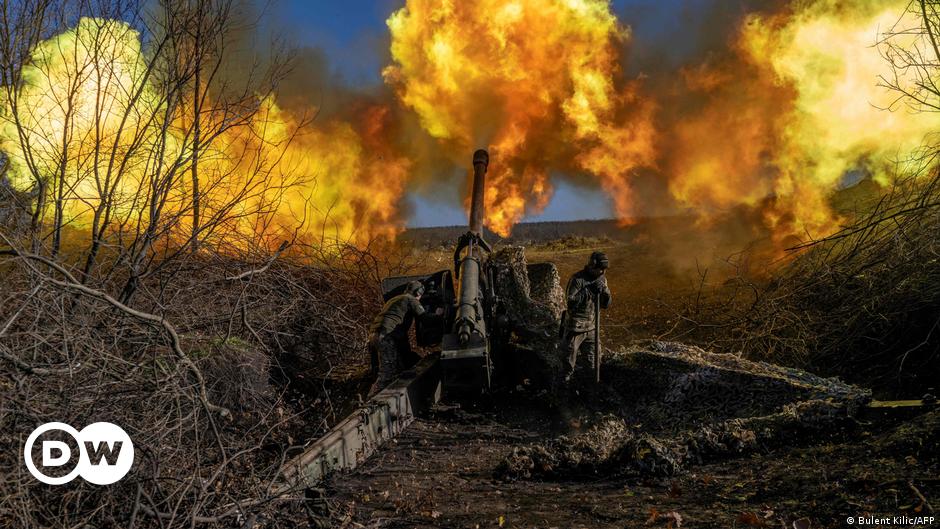 Following a meeting in Estonia on Thursday, several European countries pledged a raft of new military aid for Ukraine.

It comes ahead of a crunch meeting on arms for Kyiv scheduled to take place at the Ramstein military basein Germany on Friday.

The aid from countries including Estonia, Latvia, Lithuania, Britain and Poland will include tens of Stinger air defense systems, s-60 anti-aircraft guns, machine guns and training, according to a statement.

The UK said it would send 600 Brimstone missiles to Ukraine to help in its fight against invading Russian forces, British Defence Minister Ben Wallace said.

“Today I can say we’re also going to send another 600 Brimstone missiles into theatre, which will be incredibly important in helping Ukraine dominate the battlefield,” he told reporters at Estonia’s Tapa military base.

Brimstone is a ground or air-launched ground attack missile developed by MBDA UK for the UK’s Royal Air Force.

The UK was also aiming to train 20,000 Armed Forces of Ukraine (AFU) personnel.

Denmark said it would donate 19 French-made Caesar howitzers to Ukraine, including some still on order, following a slew of pledges of heavy weapons from Kyiv’s Western allies.

German and US defense chiefs meet in Berlin

To view this video please enable JavaScript, and consider upgrading to a web browser that supports HTML5 video

Earlier, Sweden pledged to send its Archer artillery system, a modern mobile howitzer requested by Kyiv for months, to Ukraine along with armoured vehicles and anti-tank missiles.

Speaking at a press conference, Prime Minister Ulf Kristersson said his government had agreed on a three-part military support package for Kyiv, including “the first decision on starting deliveries of the artillery system Archer to Ukraine.”

Sweden, which has broken with its doctrine of not delivering weapons to a country at war, will also send 50 CV-90 armoured vehicles and NLAW portable anti-tank missiles, the government said.

Here are other updates on the war in Ukraine on Thursday, January 19:

The European Parliament called for a special tribunal to be set up that could try Russian President Vladimir Putin for the crime of aggression against Ukraine.

The non-binding resolution said there was an “urgent need” for the EU and its member states to push for the establishment of the court.  It also said the tribunal should have jurisdiction to investigate not only Putin and Russia’s leadership, but also Belarusian President Alexander Lukashenko for aiding Moscow.

Ukrainian President Volodymyr Zelenskyy welcomed the move by the parliament and called “on all our partners to support such a tribunal”. “Russia must be held accountable for its war of aggression and justice must prevail,” the Ukrainian leader wrote on Twitter.

Ukraine says a special tribunal is needed to overcome the fact that the International Criminal Court (ICC), which has opened an investigation into the conflict, cannot prosecute Russia for the crime of aggression.

On Monday, German Foreign Minister Annalena Baerbock has called for a special international tribunal to prosecute Russian war crimes in Ukraine while visiting the ICC.

President of the European Council, Charles Michel said no effort should be spared in helping Ukraine join the European Union.

” We must each do our part to ensure the process progresses as swiftly as possible,” Michel said during his address.

Moldova has requested air defense systems from its allies to bolster its capabilities as the war in neighboring Ukraine rages on, its president Maia Sandu said.

“We have requested air surveillance and defense systems,” Sandu said in an interview on the sidelines of the World Economic Forum in Davos. “We understand that Ukraine is a priority and should receive that but we (also) hope to receive some.”

Sandu added that Russian efforts to destabilise the country have so far failed, but Moldova would need at least the same amount — €600 million (around $650 million) — of budget support in 2023 as last year, to help shield its population from inflation.

Reports have indicated that Berlin will only provide them if the US offers its Abrams tanks as well.

Kyiv maintains the German-made tanks are “essential for [Ukraine’s] survival.”

“Here are times where we shouldn’t hesitate or shouldn’t compare. When someone says, ‘I will give tanks if someone else will also share tanks.’ I don’t think this is the right strategy to go with,” Zelenskyy said by video link at the World Economic Forum (WEF) meeting in Davos.

US, German defense ministers to meet before Ramstein meeting

US Defense Secretary Lloyd Austin will press Germany’s new Defense Minister Boris Pistorius to allow for the transfer of German-made tanks to Ukraine, US officials said, as the two countries remained at loggerheads over the issue.

Germany will allow German-made tanks to be sent to Ukraine to help its defense against Russia if the US agrees to send its own tanks, a German government source told Reuters.

US officials publicly and privately insist that Washington has no plans to send US-made tanks to Ukraine for now, arguing that they would be too difficult for Kyiv to maintain and would require a huge logistical effort to simply run.

“The Secretary will be pressing the Germans on this,” one senior US defense official told Reuters.

The US official added that supplying Ukraine with German-made Leopard tanks made the most sense as a number of countries already had them and were willing to transfer them quickly.

To view this video please enable JavaScript, and consider upgrading to a web browser that supports HTML5 video

A second US official said President Joe Biden’s administration was set to approve a new aid package to Ukraine, worth more than $2 billion (€1.85 billion).

The package, which could be announced as early as Friday during a meeting of defense leaders at the Ramstein airbase in Germany, will likely include Stryker armored vehicles for Kyiv, but not M1 Abrams tanks.

The USS has committed roughly $24 billion in aid to Ukraine to defend itself against Russian forces.

Steinmeier said at a ceremony to appoint Pistorius that Russia’s attack on Ukraine has destroyed the old European security order. He also stressed that Germany would continue to support Ukraine militarily and would help “in the reconstruction of a battered country.”

“Germany is not at war, but the years of the peace dividend from which we Germans have benefited so long and abundantly are over,” Steinmeier said.

“We have to respond to threats that also target us,” Steinmeier added.

Pentagon asks US forces in South Korea to supply material

The US Department of Defense has asked its forces stationed in South Korea to provide equipment to help Ukraine in the war against Russia. The move has “zero impact” on its operations in the Asian country, the military said in a statement.

The US has some 28,500 troops in South Korea. The Defense Department said the move is part of US efforts to help Ukraine with its inventories.

The US declined to provide further details, including what types of equipment and how much has been requested or already transferred.

The statement comes after The New York Times reported earlier this week the United States was diverting munitions stored in Israel and South Korea to Ukraine for use in the war against Russia.

EU chief Charles Michel is in Kyiv to discuss with President Volodymyr Zelenskyy what “concrete measures” Europe can take to support Ukraine.

“I am on my way to Kyiv,” Michel said earlier in a video he posted on his Twitter account. He added he would meet Zelenskyy as well as the prime minister and members of parliament.

The European Council president also said he would “discuss with president Zelenskyy and his team what are the concrete measures we can develop in order to make sure they are stronger and more powerful.”

“But we all know that they are also fighting for our common European values and principles, and also for the promise of the European Union peace and prosperity,” he said. “They need and they deserve our support.”

Former Russian President Dmitry Medvedev said that the “defeat of a nuclear power in a conventional war may trigger a nuclear war.”

He was referring to what Russian President Vladimir Putin only recently referred to as a “war” in Ukraine. Previously, the Russian state had adhered to the euphemistic “special military operation.”

In a post on Telegram discussing NATO support for the Ukrainian military, Medvedev said, “Nuclear powers have never lost major conflicts on which their fate depends.”

It was the latest in a long line of shocking and provocative statements from Medvedev, who was once seen as a Western-leaning reformer but has reinvented himself as an arch-hawk since Russia invaded Ukraine last year.

The founder of Russia’s Wagner mercenary group Yevgeny Prigozhin said that his forces had taken the village of Klishchiivka, on the edge of the eastern Ukrainian city of Bakhmut. However, he added that Ukrainian forces could not be forced from Bakhmut swiftly.

Klishchiivka, which had a pre-war population of around 400 people, is located around 6 miles (9 kilometers) from the city of Bakhmut, where Wagner units have been locked in a months-long battle of attrition with Ukrainian forces.

Prigozhin warned, “Contrary to various opinions that the Armed Forces of Ukraine are fleeing from Artemovsk,” the Russian name for Bakhmut, “This is not so. The Ukrainian army is working clearly and harmoniously. We have a lot to learn from them.”

The Estonian government will provide Ukraine with the largest military aid package to date, bringing the total amount of defense aid to more than 1% of the Baltic state’s GDP, Estonian public broadcaster ERR reported.

The latest military aid package announced by Estonia consists of howitzers, ammunition, artillery support equipment as well as grenade launchers, according to a press release.

The total recovery value of the package is approximately €113 million ($122 million), which will increase Estonia’s military assistance to Ukraine to €370 million, or slightly more than 1% of Estonia’s GDP.

According to the public broadcaster, the latest package will include dozens of 155 mm and 122 mm howitzers as well as military trucks and thousands of shells to use with them.

Additionally, Estonia will provide more than 100 Carl-Gustaf anti-tank recoilless rifles and more than 1,000 rounds of ammunition.

Lavrov had said the US had assembled a coalition of European countries to solve “the Russian question” in the same way that Adolf Hitler had sought a “final solution” to eradicate Europe’s Jews.

Oleg Nikolenko, the spokesperson, said, “We call on Jewish organizations to condemn Sergei Lavrov’s shameful statement equating Russians, who are waging a war of aggression against a sovereign nation, with Jews murdered by the Nazis during the Holocaust.”

“Russia’s state-sponsored antisemitism must not be tolerated,” he said.