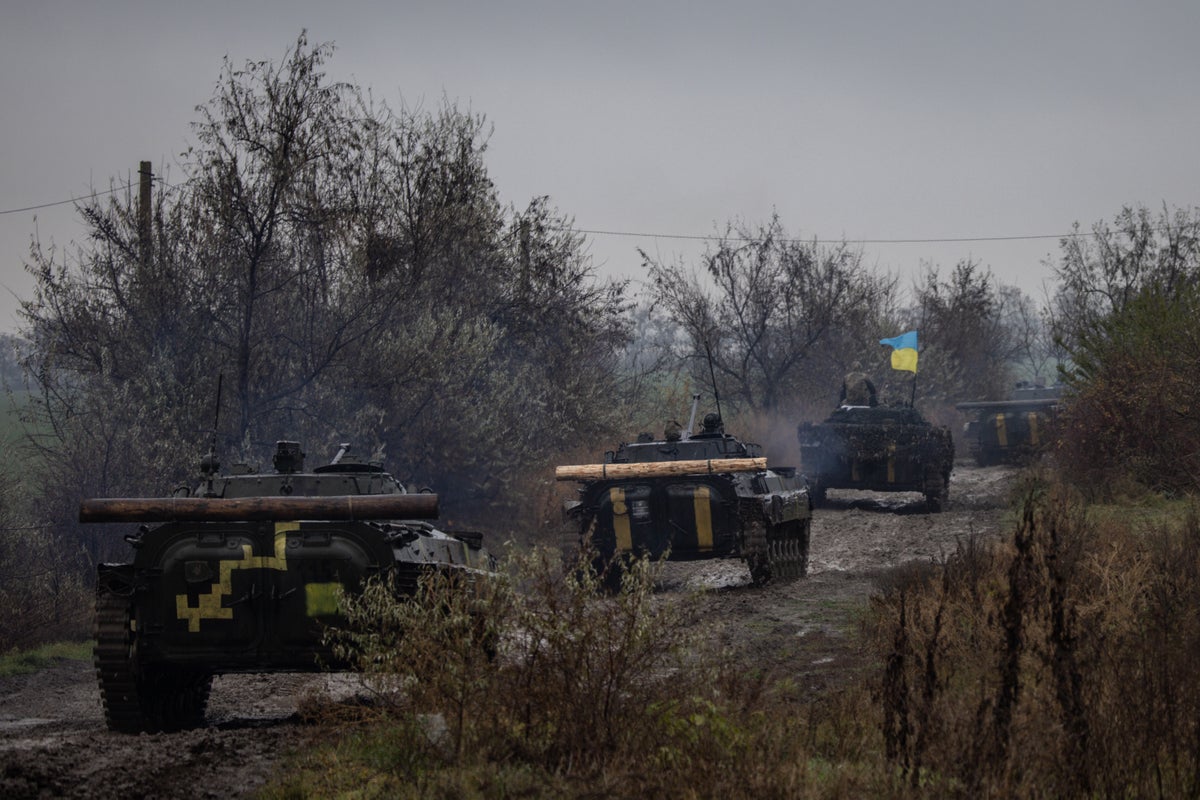 “There have been explosions at the site of this large nuclear power plant, which is completely unacceptable. Whoever is behind this needs to stop immediately. As I have said many times before, you are playing with fire,” said Mr. Grossi.

See also  NHS, Royal Mail and railways: how will the December strikes affect the UK?

More than a dozen explosions rocked Europe’s largest nuclear power plant, which fell under Russian control for a week within days of its invasion in February.

Elsewhere on the front lines of the war in Ukraine, Volodymyr Zelensky said nearly 400 shellings have been reported in the eastern Luhansk region, where Ukrainian forces are increasingly capturing areas in battle.

Fighting between Ukraine and Russia ground to a halt yesterday due to bad weather, Zelensky said.

Vladimir Putin’s troops, he said, are regrouping toward Zaporizhia, Donetsk and Luhansk as the war drags on for nearly nine months.

Ukraine says it will examine video footage of alleged detainees

Ukrainian officials have said they will investigate video footage circulated on Russian social media, which Moscow says shows Ukrainian troops killed Russian troops who may have been attempting to surrender after one of the men apparently refused to put down his weapon and the opened fire.

“Of course the Ukrainian authorities will investigate this video,” Olha Stefanishyna, Ukraine’s deputy prime minister who oversees the country’s accession to the European Union, said on the sidelines of a security forum in Halifax, Nova Scotia.

Speaking late on Saturday, Ms Stefanishyna said “it is very unlikely” that the short, edited clips show what Moscow is claiming.

Ukraine says it will examine video footage of alleged detainees

Ukraine says it will investigate video footage circulated on Russian social media showing Ukrainian troops killed Russian troops who may have been trying to surrender after one of the men apparently refused to put down his weapon and opened fire, according to Moscow

Russia’s defensive and offensive capability continues to be plagued by “serious shortages of ammunition and skilled personnel,” the British Ministry of Defense said today.

This comes at a time when intense artillery exchanges have taken place over the past seven days around the Svatove sector in northeastern Ukraine’s Luhansk Oblast, the ministry said in its latest intelligence update.

“As on other parts of the front, Russian forces continue to give priority to building defensive positions, almost certainly partly manned by poorly trained mobilized reservists,” it added.

“With Russia’s southwestern frontline now more defensible along the eastern bank of the Dnipro River, the Svatove sector is now likely to be a more vulnerable operational flank of the Russian force,” the ministry said.

Russian leaders will most likely see maintaining control of Svatove as a political priority, the ministry said, adding that it is an important population center in Luhansk Oblast.

“However, commanders are likely to struggle with the military realities of maintaining credible defenses while also trying to fund offensive operations further south in Donetsk,” the defense ministry noted.

Russian soldiers refuse to go to war against Ukraine, arrested

A new video has emerged showing how two Russian soldiers who refused to take part in the country’s war against Ukraine were held in front of other soldiers during the formation, according to a report by the Ukrainian publication Ukrainska Pravda.

The video shows the two soldiers being stopped at the parade grounds and told that a criminal case was filed against them on Nov. 16 for disobeying an order, the report said, citing Russian media outlet Meduza and Russian Telegram channels.

The video of the incident was shot in Russia’s Belgorod Oblast and shows mobilized soldiers, according to the Telegram channels.

These two soldiers are then searched, handcuffed and sent into a police vehicle.

The soldiers were detained for refusing to participate in Russia’s war against Ukraine, which Vladimir Putin’s regime calls a “special military operation”.

This is probably the first criminal case against two soldiers who withdrew from the Russian mobilization operation against Ukraine.

The war in Ukraine is having a drastic effect on children and their families, with the continued use of explosive weapons in populated areas causing much death, suffering and unrest.

These are just some of the countless stories of children in Ukraine who have had their world turned upside down by the war with Russia and show the struggles they are fighting to get their lives back on track.

According to the Office of the High Commissioner for Human Rights (OHCHR), as of February 24, 408 children have been killed and 750 injured – as these are just the verified numbers, the real number is believed to be much higher. Most of the recorded civilian casualties were caused by the use of explosive weapons with wide-area effects, including shelling from heavy artillery, multi-launch missile systems, missiles, and airstrikes.

One of the oldest Roman Catholic churches destroyed by Russia, Ukraine says

Ukrainian forces have accused Russia of destroying one of the oldest 19th-century Roman Catholic churches in southern Ukraine.

“The Russians retreated from the Mykolaiv region and destroyed one of the oldest Roman Catholic churches in southern Ukraine. The chapel of the Immaculate Conception of the Blessed Virgin Mary in the village of Kyselivka was built in 1852,” the Ukrainian defense ministry said.

About 100 Ukrainian soldiers were killed, according to Russia

Up to 50 Ukrainian servicemen were killed on Saturday along the southern frontline of Donetsk and 50 elsewhere, Russia’s defense ministry said yesterday.

It comes a day after Ukraine said about 60 Russian soldiers had been killed in a long-range artillery attack in the south, with Moscow’s troops suffering sustained losses throughout the week.

Why did Russia invade Ukraine and what could happen next?

Russia’s “special military operation” has now been raging for nine months, the conflict continuing to inflict devastating casualties and force the mass displacement of millions of Ukrainians.

Vladimir Putin started the war by claiming that Ukraine should be “demilitarized and denazified,” a completely baseless pretext for launching land grabs against a sovereign neighboring state that just so happens to have a Jewish president.

Ukraine has since fought back valiantly and continued to defy the odds by defending against Russian attacks with the help of Western military aid.

Ukraine maintains front lines in the south, heavy fighting in the east

Volodymyr Zelensky announced that his troops have dominated the front lines of battle in the southern part of the besieged country and are ahead of the Russian soldiers.

“South – we stand firm and consistently and very calculatedly destroy the potential of the occupiers,” the Ukrainian president said in his nightly address.

He added that the fiercest fighting, as before, is taking place in the Donetsk region. “Although there are fewer attacks today due to the deteriorating weather, unfortunately the number of Russian shellings remains extremely high,” he said.

“Luhansk region – little by little we are moving forward with battles. As of now, there have been close to 400 shellings in the east since the beginning of the day. Thank you to everyone who takes positions and helps our forces,” Zelensky said in the latest war update.

“There have been explosions at the site of this large nuclear power plant, which is completely unacceptable. Whoever is behind this, it must stop immediately. As I have said so many times, you are playing with fire!” said Mr. Grossi.

Moscow and Kiev blame each other for continued attacks on the critical facility, which has witnessed massive threats of nuclear disaster since the invasion began in February. It is controlled by Russia.

The IAEA team on site said there was damage to some buildings, systems and equipment, but so far none were critical for nuclear safety and security.

Good morning, welcome to our coverage of the war in Ukraine on Monday, November 21.