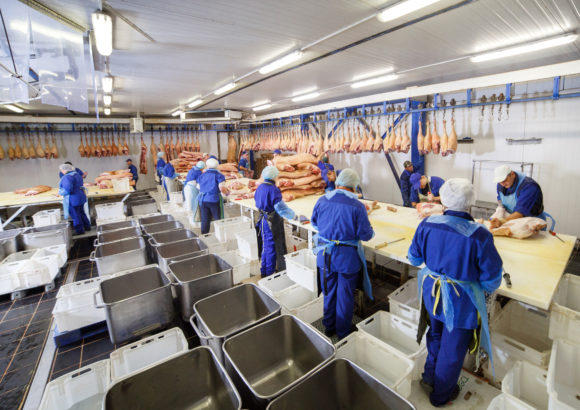 America’s largest meat-packing union on Wednesday celebrated a victory in a federal court that said it struck down a Trump-era rule allowing pig slaughterhouses to operate without line speed limits.

A lawsuit against the U.S. Department of Agriculture (USDA) by the United Food and Commercial Workers Union and three of its locals challenged the 2019 rule change, arguing that faster slaughter speeds jeopardized the safety of workers. workers.

A Minnesota federal judge’s ruling will likely be criticized by the U.S. pork industry as it attempts to replenish its meat supply after COVID-19 outbreaks shut down slaughterhouses last spring.

The 2019 rule change allowed pork factories to slaughter as fast as they want, provided they prevent fecal contamination and minimize bacteria. Previously, the government imposed a limit of 1,106 hogs per hour.

President Joe Biden’s administration, pledging to put worker safety first, quickly withdrew a Trump administration proposal to allow all poultry factories to operate faster than speed limits lines established. But reversing the pork rule should be trickier, lawyers and analysts said, because it was already in effect.

READ  How to get free in-flight Wi-Fi - UKTN

A USDA spokesperson said the agency is reviewing the tribunal’s decision “closely in light of the authorities, mission and mandate of the Food Safety and Inspection Service (FSIS) “.

The USDA’s 2019 elimination of pork line speeds was part of the new pig inspection system, which also allows pork production plants to use certain company inspectors instead of those from the ‘USDA. Those rules were suspended by the U.S. District Court in Minnesota, giving the new administration 90 days to rewrite the policies.

The environmental group Food & Water Watch called the decision a “resounding victory for the safety of plant workers.”

“This move should send a signal to the Biden administration that it should turn the tide and reconsider all aspects of these rules,” Food & Water Watch senior lawyer Zach Corrigan said.

(Reporting by Karl Plume in Chicago; Editing by Leslie Adler)